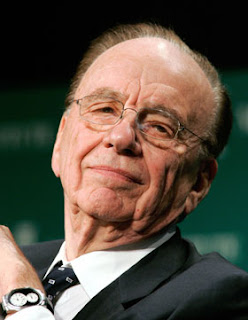 above: Rupert Murdoch- Absolute Power?
In this new article Tristan Ewins holds that Australia's monopoly media is widely encouraging fear and resentment of refugees to create a 'wedge' against Labor.  Change is needed to genuinely promote the principles of inclusive and democratic pluralism in the Australian public sphere.  A media-democratisation fund - equally empowering all Australian citizens - could be part of this picture...
nb also: If you find this article interesting PLS join our Facebook group - to link up with other readers, and to receive regular updates on new material.
see: http://www.facebook.com/group.php?gid=58243419565
Tristan Ewins, September 4, 2011

Reading Melbourne’s ‘Herald-Sun’ today this author was reminded of just how far the Murdoch media (and other media interests) have been willing to descend in order to destabilise the Federal Labor government in Australia.


The original Resource Super-Profits Tax could have rectified this nation’s “two speed economy”; diverting some windfall mining profits (from the natural resources belonging to all Australians) to bolster superannuation, and support manufacturing, tourism and education.  This at a time when a high Australian dollar is ‘supercharging’ mining industry profits; but undermining other exports. (that is, industries that between them employ many times more people than the mining industry)
At the time other areas of industry would not break the ‘united front of capital’ against any impositions; but surely the crisis is now so pronounced that this must again be questioned.
In the face of such abuses for Labor the challenge is to turn the fiction of liberal and democratic pluralism in ’s public sphere into a reality.
Attempts to promote media-diversification would no-doubt be (ironically) depicted as ‘assaults on free speech’.  But the tendency towards monopolisation in Australian media – and the abuse of that power - is itself an assault upon the inclusiveness of our public sphere.  And such inclusiveness is itself a precondition for genuine democracy.
Labor has nothing to lose at this point by going ahead with a full media enquiry.
But in the process the government must be careful not to reproduce the same kind of abuses as those they would be seeking to challenge.  Rules regarding “fit and proper” people to own media could set a dangerous precedent.  Today the power of wealth contracts and shackles the public sphere: backed by state recognition and enforcement of the ‘rights’ that accompany wealth.  But EXCESSIVE or inappropriate state regulation of media could also set a dangerous precedent which could ‘come back to haunt’ the Left; providing a pretext for ideological censorship.
The aim of a media diversification policy ought to be the creation of an inclusive and pluralist public sphere.  This is not compatible with the domination of the industry by a handful of billionaire puppet-masters. Nor is it compatible with the monopolisation of sectors of the industry – for instance the tabloid market in where the Herald-Sun has no real competition.  (and in the broader market has a readership of about 1.5 million as compared with ‘The Age’ with a “Monday to Friday readership average of 668,000” – source: Wikipedia)
Cross-ownership laws need to be tightened and effective monopolies broken up.
Certainly that would be a start.
We need at least two major players in every significant market: effectively representing a wide and inclusive spectrum of viewpoints.  This includes more specialised markets: for instance whether we speak of tabloids or broadsheets.
But we need a more pro-active policy as well.
To that end: a ‘media-democratisation fund’ could be a visionary solution to the question of representative and inclusive media in this country.
A fund – perhaps $5 billion to begin at a very rough estimate– could be established and then distributed equally in the form of non-tradeable shares – to all eligible Australian voters regardless of personal wealth. (ie: as a right of citizenship) Shareholders would then be encouraged – and a framework established – for them to organise their investments collectively, equally and democratically in new media intended to create genuine diversity and inclusion of perspectives and viewpoints.
All profits would be returned to the scheme to be reinvested: the motive being diversification and inclusiveness – not private financial gain.  This would not be an effective expansion of the state sector, however: as all citizens would have individual rights to determine their investments as equal and private shareholders.
But to achieve the end of real and effective diversification – a real shift of cultural power – and in favour of diversity and inclusion - the scheme would need to apply in the billions - or at least hundreds of millions.  A ‘token’ scheme would not achieve that.  (Pls note again, though: I am providing only very rough estimates here as the author does not have access to such modelling as to accurately determine what would be necessary)
Maintaining and bolstering existing public media such as ABC and SBS undertakings: and ensuring a genuinely pluralist, participatory and inclusive outlook in these – would also serve these crucial ends.
If we’re serious about liberal pluralism: about democracy and inclusion – the time has come for change.
Posted by Vaughann722 at 5:16 PM