Double Standards when its comes to talk of ‘Class War’ 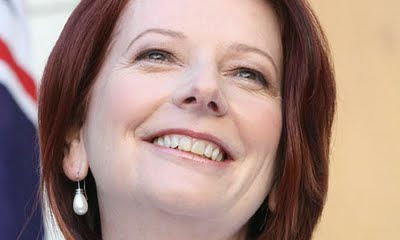 
Unfortunately – as far as redistribution via overcompensation goes, the kind of strategy it seems Gillard is suggesting would provide a far shallower pool of funds to work with than would be the case were the top 20% incomes demographic excluded.
Perhaps given this context pensioners will miss out on overcompensation even under Labor; and those on low to middle incomes won’t receive the more robust degree of overcompensation they deserve.  This could prove a missed opportunity for Labor – in maximising the reconsolidation of its ‘class base’.  Although doubtless Gillard sees it as a strategic choice to keep more voters ‘on side’.
Nonetheless, perhaps it’s not too late for compromise. Perhaps if pressured by the Greens and Labor’s Left Prime Minister Gillard could strike an agreement to withhold compensation for the top 15% of households, to be redistributed to those genuinely ‘doing it tough’.  A higher carbon tax rate in this context could be another option - an alternative to lower compensation 'cut-off thresholds' - to increase the total pool of funds available for redistribution from the top 15% to those in genuine need.
Regardless of the very cautious and modest nature of Gillard’s proposal, doubtless it still will not please critics such as Miranda Devine, and other Murdoch writers.  Devine seems to have an aversion for the very concept of progressive redistribution – no matter how mild.  But as far as this author can tell she has barely considered the situation of those who have been left disadvantaged by decades of “neo-liberal reform”; and the very real process of redistribution which has occurred to the detriment of workers and the poor.   Indeed: After all these years of redistribution from low and middle income groups TO the wealthy and the upper middle class, the modest forms of progressive redistribution suggested here should simply be seen as a tentative move towards some kind of 'correction'.
Yes Labor is struggling in the polls. Elements of Labor’s core class support base have been drifting away gradually for a long time under the perception that Labor no longer represents their interests.   But the prospect of progressive redistribution to the advantage of the vast majority of Australians who are on low to middle incomes is what the conservatives are scared of.  They’re afraid of a Labor Party which takes action to re-consolidate its class base.
By contrast when the Conservatives speak of cutting taxes to reward ‘hard work’, they’re usually talking of ‘relief’ for those on higher incomes. The underlying assumption is that ‘the market is just’: that those on higher incomes deserve increased benefits for their effort.  The implication is that they work harder than others.
But in an Abbott ‘tax reform’ package, you can be certain that it is those on low incomes – including some very hard working people – who would miss out in outright terms compared with upper-middle class and wealthy taxpayers.
We speak here of people on minimum wage and thereabouts: cleaners, child care workers, retail and hospitality workers, textiles workers, and many manufacturing workers.  These are the same people who would suffer from a winding back of the social wage, or the effective introduction of ‘flat taxes’ with user-pays mechanisms in the context of Public Private Partnerships.  And Abbott’s proposed tax cuts must draw from the Budget bottom-line somewhere.
Too many people have been disadvantaged and suffered injustice in recent decades. And it is a process which always accelerates under Conservative governments.


Increasingly, though, there are those who once felt they could depend on Labor to defend their rights and interests – who no longer believe this to be true.  This is even undermining Labor’s membership base; its mobilisation as a social movement.
Now, though,  is Labor’s opportunity to re-establish its credentials as a party with values; a friend of the disadvantaged, and true to its class base.
Posted by Vaughann722 at 11:54 AM 4 comments 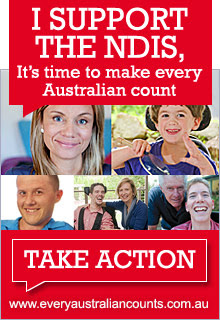 In the following article Tristan Ewins argues that overcompensation is key to 'selling' the carbon tax' - and that welfare recipients should not be 'left behind'; But also that Labor needs a 'policy circuit breaker' NOW if it is to have any hope of re-election in 2013. A National Disability Insurance Scheme, and pay parity for community sector workers - could provide 'a way forward'.
nb also: If you find this article interesting PLS join our Facebook group - to link up with other readers, and to receive regular updates on new material. see: http://www.facebook.com/group.php?gid=58243419565


A ‘circuit-breaker’ for Labor
Labor has been taking ‘hit after hit’ in the polls and in popular media for a long time now.  There are many publications which will put a ‘negative spin’ on pretty much anything and everything Labor says and does.  The danger is that voters will ‘switch off’, virtually determining the government’s fate more than two years ahead of the next election.  The carbon tax may turn out well ultimately, but a year from now it may be ‘too late’ for the government.
The government needs a ‘circuit breaker’ and needs it now.   Labor needs to break the cycle of fearful speculation now - with an agenda of constructive and visionary reform with which to inspire and engage the electorate.  The National Broadband Network (NBN) helped Labor ‘across the line’ last time; but the government needs new initiatives, as well as substantial progress on the NBN.
A National Disability Insurance Scheme has long been touted as an option by rising Labor parliamentarian Bill Shorten.
According to the ‘Every Australian Counts’ website, a NDIS would:


In addition to this a NDIS needs to provide substantial new funds (ie: several billions every year) via a Medicare Levy-like mechanism rather than just a restructuring of the funding mix.  New funds are necessary to increase Disability Support Pensions and Carers’ Pensions; extend support services and provision of necessary home infrastructure; and to bring more crucial medications under the umbrella of the Pharmaceutical Benefits Scheme.
Specifically as a consequence of a NDIS, in current terms carers and disability pensioners should also receive a rise in their pensions of at least $25/week; indexed on top of existing pension formulae.
A NDIS could also source additional funds for improvement of mental health services: an issue which is resonating strongly with the electorate.
While a NDIS could disrupt the cycle of fearful speculation about a carbon tax, it would also comprise a landmark reform – a genuine record of achievement for Gillard Labor.

Finally, the government could move onto the front foot regarding the ‘equal pay’ campaign being driven by the Australian Services Union – to provide effective pay parity for workers (mainly women) in the community services sector.

Because it is mainly women who are employed in the sector, this issue has been raised as one of effective gender discrimination. But not-for-profit organisations providing aged care and other services (as well as in the public sector) will need support from the government in adapting to any improved regime of pay and conditions.  Hence for these – and other vital reforms – the government needs to aim during this term for a sustainable expansion of social expenditure in the vicinity of 1.5% of ; backed by progressive tax reform.

Generous superannuation concessions for the wealthy could also be wound back.


But until the carbon tax is implemented – with accompanying compensation and overcompensation – some degree of fearful speculation will continue. Labor needs to finalise its carbon tax package soon – to put fears to rest.
But speeding up implementation could also be crucial; and Labor could do well to aim for the end of this year, rather than allowing damaging speculation to continue until mid-2012.  Again: by then it could be ‘too late’.
Debate welcome as always!
Posted by Vaughann722 at 4:12 PM 1 comments 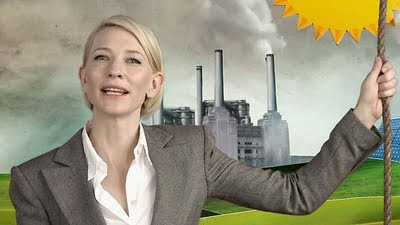 above: Cate Blanchett in the recent advertisement backing action on climate change
nb: If you find this article interesting PLS join our Facebook group - to link up with other readers, and to receive regular updates on new material. see: http://www.facebook.com/group.php?gid=58243419565

Perhaps now there is a need for introspective reflection within Labor on a cross factional basis – to reconsider the mixed economy, and concede  past mistakes. And even within the Liberal Party there could well be recognition that the mixed economy was undisputed under Menzies.

The final issue we will consider here will be the nature of carbon tax compensation.
In ‘The Age’ on 1st June 2011 Ross Garnaut was quoted as arguing for 55% of carbon tax revenue to be passed on to tax-payers, rising to 64 per cent by 2021-22, with industry receiving 35 per cent, moving down to 20 per cent by 2021. (presumbly as industry adapted and modernised)  But ‘The Age’ also reported him as arguing that there should be “less compensation for pensioners and welfare recipients…because of [the] 2009 rise in benefits.” Effectively this would mean ‘no overcompensation for pensioners’.


There are  a few issues here.
Firstly overcompensation is essential for Labor in ‘selling’ the carbon tax.  This is as much the case for pensioners as for anyone else.  Pensioners vote!

It is also key for social justice imperatives. Pretty much all pensioners struggle, and many disability pensioners and carers in particular don’t have many options in improving their financial circumstances.

“Working households faced extra costs of 4.5 per cent in the year to December, age pensioners 3.1 per cent and welfare recipients 4.5 per cent. The grew 2.7 per cent.”

He also noted how the Bureau of Statistics had argued:
“Age pensioners spend a relatively high proportion of their income on utility bills and fruit and vegetables, both of which shot up in price in the year to December.But while aged pensioners had their payments adapting to  “either the [or] the pensioner living-cost index or male total average earnings (whichever is most favourable),  Newstart Allowance is only adjusted to only “what is…the lowest of these.”
This means that even in the face of onerous active labour market policies and ‘work for the dole’ programs, Newstart has been eroding greatly relative to other pensions for a long time.

Other full-pensioners (disability, carers, aged pensioners), whose financial situation is not necessarily so dire as that of the unemployed, could receive overcompensation starting at $25/week. Single Parents also deserve a significant extension of benefits.

And all such increases should be fully indexed on top of existing formulae.

Although improvement for Disability and Carers pensions – and associated services- could also be achieved via a National Disability Insurance Scheme; which would have Labor seen as ‘moving onto the policy front foot’. Perhaps providing such reform for Disability Pensioners and Carers separately would enable proportionately greater carbon tax-related compensation for other low to middle income groups, making the carbon tax ‘easier to sell’. But on social justice grounds Gillard Labor would still have to provide for Disability pensioners and Carers separately via a National Disability Insurance Scheme (NDIS) well before the end of the current term. Labor needs a positive message to re-engage with voters, and a NDIS could be crucial here.

The Greens and Independents especially need to make the most of their leverage over Labor to promote this reasonable and achieveable social justice agenda.

Here’s hoping that conservative forces fail in their strategy of attempting to ‘deprive the climate and carbon tax debate of oxygen’; manipulating voters through distraction and focus on trivalities. The issues are just too important to be engaging in these kind of cynical games.