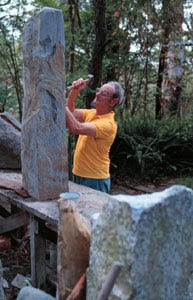 Above: Eric Aarons some years ago now, pursuing his passion for sculpture


In the following notes and reflections former Communist Party of Australia Secretary Eric Aarons considers the historical and current social and economic importance of the Middle Class to the causes of liberal rights and social change. After Bernstein, he considers that the Middle Class has not disappeared - despite prior Marxist predictions that it would.  Hence the place of the middle class remains important for Australian Leftists today.


I write this essay, not to expound or urge any particular political line or policy, but to stress the importance for those doing so not to neglect today’s middle class.


In my view, Karl Marx’s most abiding contribution to understanding human history and forms of social organisation was the primacy he gave to the development of the ‘productive forces’ available to any  population  of human beings. He was not the first to do so; Adam Smith, and the group of ‘Scottish Historians’ around him, held to that view also (see Classics edition of The Wealth of Nations: Books 1-111, 1986).


In his introduction to that edition, scholar Andrew S. Skinner quotes William Robertson, a member of the Historians group, that ‘In every inquiry covering the operations of men when united together in society, the first object of attention should be their mode of existence. Accordingly as that varies, their laws and policy must be different,’ (p. 28)


The ‘Industrial revolution’ of the 18th century was characterised as ‘a rapid and ceaseless development of the productive forces’. Most of these were new inventions, featuring machines driven by the power of steam, then electricity, then nuclear power, and in sizes from miniscule to massive. Lawrence James writes: ‘The middle classes refused to abandon the rest of society to the physical and moral consequences of industrialisation. Middle class men and women put pressure on the state and local  government and offered their time and money to create what they regarded as a humane, contented and civilised society.’ (p.249 Lawrence James: The Middle Class  A History, 2006). They still do.


It may be needless to point out that this proliferation of new productive forces, their operation,  maintenance and improvement, required more skilled and educated people, and in turn more educators to achieve that purpose. So education rapidly extended, spreading far beyond its previous limits of educating and forming ‘gentlemen’ who were distinguished by not having to work for a living with their hands, or even their brains, but to be recognised socially as such, and to keep up with the escalating written cultural advances.


Their daughters also had to be educated ‘to  make a good marriage’ – that is, one to a man with money, or expecting an inheritance.  There were also growing demands of generally not fully occupied middle class wives for suitable enjoyable reading, while an increasing number of women wrote such books and are still famous for doing so.


On a wider scale, the industrial revolution required a growing proportion of the population to be educated so that they could extend and deepen that approach to the industrialisation revolution.  I suggest that these requirements marked the origins of the modern middle class, and the building  of its present cultural, political and economic larger role, with women becoming increasingly prominent, despite remaining discriminations.


Karl Marx wrote a lot about the growing proletariat, created by the ascending capitalism, that he thought would end the rule of capital. And, using his withering polemics, Marx defended his predictions, warning that radical members of the middle class might be ‘unreliable revolutionaries’, because of what he saw as their impending ruin by capital and decent into the ranks of the proletariat. Marx thought that ‘class origins’ were generally a useful guide to future political behaviour, and this still existed in my young days. But 90 years later, in today’s ‘topsy-turvy’ world,                it doesn’t count for very much.


The modern middle class in the economically developed countries, though not officially organised,  has become the largest stable social group in their countries, since the working class, unwillingly, relinquished that position. It comprises about 40 percent of the population, and holds 35 per cent of the wealth of the countries they inhabit, according to figures presented by Thomas Piketty in his book: Capital in the Twenty-First Century. This analyst also points to their growing patrimonial (inheritance) role, particularly in regard to housing, which is becoming increasingly expensive, and important for their offspring.


The middle class is neither disappearing now, nor destined to do so, as Marx and not a few later economic theorists have suggested, though they struggle along with others to cope with the continuing Global Financial Crisis. It is time that left/progressives acquainted themselves with the social characteristics of the middle class, and the role they could play (indeed are presently playing) in ongoing struggles, such as climate change, conservation, and exerting a degree of moderation in human dealings with our planet and other living species.


An attempt to sketch this class’s  modern ‘profile’.


I present, partly from my own memories, elements of such a profile. Both sets of grandparents were middle class; one Jewish (from England). He was there employed as a cigar-maker, but he established himself in business as a shoe-repairer in Melbourne, then a seller of manufactured boots and shoes. Successful, he bought a house in the developing suburb of Glen Huntly, then one beside it for his eldest daughter, Miriam.


He had a club foot and walked with the aid of a stick. He had quite a good voice, and knew a wide selection of Cockney songs, a large number of which denigrated women. This was widespread in those days, but remains very active, and still widely violent along with economic discrimination.


Clearly, the middle class likes new things and processes, notably with women, along with men taking to bicycles in large numbers when they became available. They also took to the early radios driven by a metal ‘cat’s whisker’ on a sliver of metal ore, then large decorative consoles with valves.


My maternal grandparents had a large modern house in the northern (upper) part of the suburb of Caulfield, and they had built in the large grounds a sheltered garden in which the grew plants, mostly  for sale.


My paternal grandmother drove (rather roughly) the big Buick they owned, as did her daughter Rae. TV when it came was a must – indeed any new device that responded to the desire to extend and exercise their inherent human capacities, which were stifled or looked upon with disapproval by conservatives who want to keep to accustomed ways.


The middle class does not respond to theoretical speculation about general social advance,but  persistently pursue it pragmatically, devising practical measures to actually achieve some aspect of it. ‘Schools of Art’, for instance, if I remember rightly, were widely established, mainly by middle class women in Melbourne, around the turn of the twentieth century.


Using his deciles mathematical system on income, Piketty says that if the average pay in a country is 2000 euros per month then this distribution implies that the top 10 percent can earn on average, 4000 per month, the bottom 50 percent 1400 euros a month, and the middle 40 percent 2,250 a month. “This intermediate group may be regarded as a vast ‘middle class’ whose standard of living is determined by the average wage of the society in question.”


But it helps to keep in mind that ten ‘deciles’ consist of 10 parts that he then often divides into 3 parts, which correspond roughly to the classes. The first decile, comprised of the top dogs, is basically made up of those who hold the most wealth and have the most say on the key issues, and is often called the establishment. The next usage goes 2 to 4 (the middle), and the lower five make up 10. Piketty adds: ‘. . . if the average pay in a country is 2,000 euros per month then this distribution implies that the top 10 percent earn 4,000 euros a month on average, the  bottom 50 percent 1,400 and the middle 40 percent 2,250 . This intermediate group may be regarded as a vast ‘middle class’ whose standard of living is determined by the average wage of the society in question’. (p. 250)


‘The middle class allegiance is to free trade (and of course cheap food and the rights of property). For the previous seventy years the middle class had enjoyed unparalleled power over the lives of others, mostly those beneath it. Whether as employers, shapers of public opinion, voters, elected officials or public servants, its members had been able to compel a significant part of society to accept its assumptions and ambitions. Pragmatists tended to outnumber idealists.’ (p. 248, James Lawrence book)


The prevailing religious and moral codes of the Victorian middle class made social indifference impossible. They refused to abandon the rest of society to the accompanying physical and moral consequences of industrialisation, to create what they saw as a humane, contented and civilised society, of which they would constitute a major if not leading part.


They endorsed the view that the possession of the faculty of reason was humanity’s major weapon in winning a material life from nature, and urged that it should  also be the centre of political life, thereby under-estimating the role of other factors, such as emotions, values, self-promotion, enrichment and plain deception.


Anyone who wants to win their support for a cause or a particular approach to an issue, needs to ‘make a good case’, including a fair one, which the Abbott/Hockey government has failed miserably to do; Their bluster does not suffice.


An earlier example of the role that the middle class can play was the defeat of Menzies, who declared in the post-war election of 1949 his intention to declare the Communist Party illegal and dissolve it. Winning that vote, he introduced a law to do so, but it was declared invalid by the High Court.  He then resorted to a referendum (of the whole of ‘white’ Australia that he was confident of winning).  It was defeated on September 21, 1951, and there can be little doubt that a large section of the middle class, both high officials and ‘ordinary’ members, voted in this direction.