Why Are Sole Parents Under Threat? 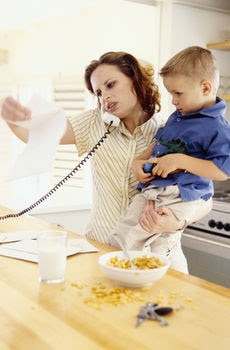 above: Sole Parenting IS work in itself!

On  Jan 1 2013, the Australian Labor Government moved 84,000 sole parents, whose youngest child had turned 8, from Parenting Payment Single (PPS) (Grandfathered), a single parent pension, to NewStart, an unemployment benefit. The government justified this decision by suggesting they were merely encouraging workforce participation and bringing equality to 2 different groups of single parents, (pre and post 2006 recipients).


Maarit Hahkomaa argues for the recision of that decision in light of the existing pressures on sole parents - and the needs of their children.  The May Budget is the perfect opportunity to sets things right again...


The revision of the Fair Incentives to Work legislation was initially introduced in 2006, when there were approx. 800000 single parent families receiving PPS.  The change in legislation, which moved single parents from PPS to Newstart when their youngest child turned 8, (rather than receiving PPS until youngest child turned 16) would apply to new applicants after July 2006. Existing PPS recipients would continue to receive PPS under the former legislation – known as Grandfathering.
The provision for “grandfathering” of PPS recipients at the time was a deliberate move by the then Liberal party Government to make the changes in legislation more palatable to the general public.

Senator SINODINOS (New South Wales) - Tuesday, 9 October 2012 “It was a very deliberate decision on the part of the government to grandfather people who were on these payments at a certain date. The reason for that was actually to make it easier for the public to accept the reform by making it clear that it was not having a retrospective impact but rather that it was focused on new recipients. This has been an important principle in a lot of social security legislation and, indeed, tax legislation over the years. Its purpose was to make it easier for the community to accept the reform.” (http://parlinfo.aph.gov.au/parlInfo/search/display/display.w3p;query=Id%3A%22chamber%2Fhansards%2F3a74ad30-c7a6-48d2-b316-bc4615cee12a%2F0011%22).

As such, the change in policy went largely unnoticed and undisputed in the wider community, just as the Government intended.

The introduction of the Social Security Legislation Amendment (Fair Incentives to Work) Bill 2012 which endorsed moving “grandfathered” sole parents from PPS to Newstart if their youngest child had turned 8 before Jan 2013, is an ill thought out and prematurely implemented policy which has been found by the Governments own Parliamentary Committee to violate the human rights of sole parents and their families in Australia.

Mr Harry Jenkins MP, Parliamentary Joint Committee on Human Rights, Fifth Report of 2013 (March 2013) “1.120 The committee considers that the government has not provided the necessary evidence to demonstrate that the total support package available to individuals who are subject to these measures is sufficient to satisfy minimum essential levels of social security as guaranteed in article 9 of the ICESCR and the minimum requirements of the right to an adequate standard of living in Australia as guaranteed in article 11 of the ICESCR. Nor has it indicated the basis on which it makes that assessment. In the absence of this information, the committee is unable to conclude that these measures are compatible with human rights.”

If the change in policy has been found to violate the human rights of the sole parents who were still “grandfathered” under previous legislation then it follows that moving sole parents to Newstart when their youngest child turns 8 has ALWAYS been a violation of human rights given that the Newstart payment has not been increased in real terms for 20 years.

The Newstart allowance is a completely inappropriate form of income support for a sole parent family. The unique needs of a sole parent family are entirely different to a single person with no dependent children and a coupled family where both parents can share the responsibility of raising their children. Parenting is and should be recognised as a full time job.


The policies and decision making by this Government fail to recognise the value of parents and are destroying the family unit – the building block of our future society.

Sole parents do the job of two parents. They don’t have time off, they don’t get holidays and the increasing financial pressure being placed on sole parent families will not produce a healthy nor stable future society.  Grandparents raising their grandchildren, have also been moved to Newstart and these elderly people, who have already contributed a life time of paying taxes and contributing to the community, have been sent to Job Service Providers and told they need to start actively looking for work in order to keep their Newstart payments.

Senator SIEWERT (Western Australia) Tuesday, 9 October 2012 argued:
“Schedule 1 of the Social Security Legislation Amendment (Fair Incentives to Work) Bill 2012 will drive already vulnerable single parents, the majority of whom are single mothers, further into poverty. What this bill does is drop single parents who are currently on parenting payment single down to a payment which is nearly $140 less than what they are on at the moment. We know that Newstart is now around $132 to $140 below the poverty line. In other words, we are dropping single parents onto the poverty line. Aren't single parents still parents? It is not only the mothers and fathers that we are dropping there, but their children as well. That is what you are about to pass in this place.”

90% of sole parents in Australia are women. This policy is therefore also a violation of women’s rights. There is a rising concern amongst the sole parent community, that women will stay in violent relationships because they will not be afforded the financial support to meet their most basic needs of housing, food, transport, clothing and education for their children should they leave.
This policy, aided by the Members of Parliament who refuse to oppose it, facilitates violence towards women and children by failing to ensure adequate levels of financial support for domestic violence victims.

Allowing sole parents to study as a recognised activity under Parenting Payment Single, provided an enormous incentive for sole parents to increase their skills and education level once their children were at school. Many sole parents, who were supported under the Parenting Payment Single pension, report that because they were financially supported to study, they were able to find better jobs and leave the welfare system entirely, providing an excellent example of the benefits in providing adequate levels of income support to sole parents.

Moving sole parents to Newstart, which does not allow them to commence study after their youngest child has turned 8, entraps families in the welfare system and creates a cycle of poverty rather than alleviating the circumstances which restrict sole parents to working in casual or part time employment for low wages. This will cost the Australian Government exponentially more in continued welfare support for people who are unable to study or retrain and therefore enter higher paid jobs.

Sole parents who have left a marriage, who may have funds from a marital property settlement, are unable to buy their own homes, buy a car, have a credit card or get a loan. The Newstart payment, as opposed to the Parenting Payment, is an unemployment benefit and is not recognised by lending institutions as an income.

The elected members of the Australian parliament who refuse to address these issues, are perpetrators of negligence.

The elected members of the Australian parliament are public servants, who assume a duty of care to the people they represent when they accept their ministerial positions. Allowing sole parents and their families to suffer incredible hardship and forcing them to remain trapped in a cycle of welfare dependence under this inappropriate legislation constitutes a dereliction of their duty of care. Damage in the form of sole parents experiencing increased rates of poverty, homelessness, depression, domestic violence and distress at not being able to provide the most basic needs for their families is a direct result of this failure of elected members to adequately carry out their duty of care.

There are approximately 900 000 sole parents in Australia and they all vote. Their families and friends also vote. Allies of the Sole Parents Movement also vote.

The votes of these people will be given to those electoral candidates who are prepared to meet their duty of care obligations to the public who elect them.

The following are the demands of the Sole Parents Movement and their allies.