150th Anniversary of Capital : Marx still Highly-Relevant Despite the Critics 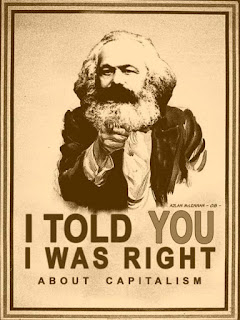 Debating Marx's ‘Labour Theory of Value’ and 'Marx on the Environment' on the 150th Anniversary of Marx’s ‘Das Kapital’ (Vol I) ; Responding to the Critics.

At the ‘ALP Socialist Left Forum’ Facebook group we’ve been discussing Marx’s ‘Labour Theory of Value’.  This is notable because this year is the 150th Anniversary of the publication of Marx’s ‘Das Capital’ (Volume One).

In the relatively-near future I intend restructuring, editing and partially-re-writing a speech I made on that subject.

But for now I would like to discuss Marx's famous 'Labour Theory of Value' specifically.  (and also whether or not Marx 'valued' the natural environment)  Another contributor basically argued that ‘labour theory of value’ (as argued in Capital Volume One) was defunct ; and that it led a lot of people to reject Marx.   This is a pretty common response ; and certainly ‘bourgeois’ responses to Marx have often fixated on discrediting his ‘labour theory of value’.  This has arguably been partly for reasons of interest – and hence a wish to discredit the argument that labour is responsible for all ‘values’ in terms of goods and services. (with the exceptions of land and the natural environment)   But there have been philosophical arguments about the nature of ‘value’ as well.  And there has been much confusion because for Marx ‘value’ is an analytical category with a specific (non-mundane) meaning.

Typically respondents have argued that ‘value is subjective’.   And indeed in my PhD Thesis I approved of (Marxist Revisionist) Eduard Bernstein’s merging of ‘objectivist’ and ‘subjectivist’ elements in his critique of Marx’s Labour Theory of Value.  Therein I argued that Marx did not account sufficiently for the relative privilege of what may be called the ‘labour aristocracy’.

Anyway: Having studied Capital more closely now, though, I feel in a better position to respond with greater confidence.  Here’s my understanding, now, of ‘Labour Theory of Value’.

My understanding is that Marx's labour theory of value is in some ways a self-referential system ; and it makes sense on its own terms. To begin you have to distinguish between the price of labour power sold to employers as a commodity and 'labour theory of value' where ‘value’ is ‘the amount of labour congealed in commodities’.  Though truly the idea of "average socially necessary labour time" does not distinguish between different *kinds* of labour.  That said: Marx does not deny a subjective element to items' values - or to the use values AND exchange values of different kinds of labour power ; He even recognises differences in the relative value of different kinds of labour power at some points in Capital ; but it's true that he doesn't explore that in enough detail. It’s a complication with regard his system and perhaps hence he neglects it. We are unclear how different qualities of labour should be recompensed under socialism for instance.  So yes, there are deficiencies in some of Marx’s notions even though they are internally consistent.

To elaborate: There is a problem not only with the *mechanism* or ‘process’ of Surplus Value Extraction (in the context where all value is ultimately created by labour ; so Surplus Value can be argued for as ‘unpaid labour time’)  ; there is also a problem that while some workers experience extreme alienation (ruinous working conditions, lack of creative control or fulfilment) in return for bare-subsistence, other workers (while technically exploited) experience superior conditions (including pay, creative control, prestige, career paths) ; and historically this is played upon to disrupt solidarity within and across the working class.

But also: While Marx DOES recognise the role of Demand and Supply on the price of labour power ; he does not consider as such ‘the relative worth’ of different kinds of labour once skill, difficulty etc are accounted for.  So under democratic socialism what kind of differences of recompense are possible – or even desirable?  How for instance do we promote solidarity and mutual respect ; but also some reward for skill, difficulty, effort and so on?

Nonetheless *Surplus Value* makes perfect sense. That is: workers *broadly* are paid the means of (relative) subsistence (a privileged minority (labour aristocracy) receive considerably more than the average) ; but there is not "an exchange of equivalents" ; the employer extracts surplus value from workers' labour.  The worker is only recompensed proportionate to a fraction of what he or she creates. That much makes sense. Also 'Labour theory of value' makes sense in that values (as defined by Marx) are created by labour ; and Capital is 'value in motion' ; a process for the cyclical creation of values ; and the production of surplus value ; and hence the reproduction of the capital relationship ; and capitalism generally.  Wages maintain workers at the relative level necessary for subsistence. The surplus is extracted both to pay for the maintenance and expansion of production ; and also for the maintenance of bourgeois lifestyles. All that makes sense. And no wonder capitalists and their apologists have strived to discredit Marx ; because the analytical category of surplus value implies a devastating moral critique of capitalism.

Theoretically some return on (small) investments of capital may be warranted ; because of the real sacrifices the small (working class) investors and some petty bourgeois make. But once you start talking about the bourgeoisie proper it's a different story. Only the bourgeoisie proper has access to such credit or reserves so as to overcome the barriers to entry into certain markets. And whatever risks and initiatives the bourgeoisie take ; the fact remains that Surplus Value is extracted. And what is more that the working class is separated from the means of production ; does not control the means of production ; must labour under the capitalists’ terms and labour discipline ; does not usually have creative control over its labour ; is often employed in monotonous, partial tasks which are profoundly alienating.

So there are big problems with capitalism that Marx is still very useful in analysing. Though he also observes capitalism's inbuilt tendency to drive innovations ; in search of what he calls Relative Surplus Value.  (think of it as a 'temporary advantage' in terms of quality or productivity - often driven by technological advances) That - in tandem with what Marx calls 'the Coercive Laws of Competition' - means that capitalism still drives an enormous amount of innovation and technological development. But capitalism proceeds at a terrible cost to some workers. Especially if you're at the wrong end of the Imiseration process ; ie: if you're a textiles labourer in Bangladesh.

‘Imiseration’ refers to class bifurcation ; as well as absolute impoverishment and ruination – which Marx anticipated.  Relative Western prosperity – largely delivered by technological innovation, qualitative developments, as well as improvements in technology-driven productivity ; has been argued as a refutation of this. But arguably absolute ‘Imiseration’ has also been ‘displaced to the Third World’ ; with an ‘outer dialectic’ where Colonial/Imperialistic exploitation of ‘peripheral’ economies provides ‘relief’ in Western (core) economies.  (eg: cheap consumer goods for Western workers) Nonetheless we do see ‘relative imiseration’ WITHIN Western (core) economies as well ; as with the exploitation of the working poor within the United States. (hence perhaps an ‘external’ aspect to the ‘inner’ dialectic  of class struggle within the US ; ie: middle income (working class) living standards are supported by the exploitation of the working poor) And the global capitalist economy (having integrated economies the world over ; and having integrated the labour-power of women) is again pressing its limits ; leaving the question “what next for growth (and hence capitalism) – if not greater intensity of labour?  (and hence further attacks of the rights of labour)

In summary, David Harvey argues that Marx's Capital (Vol I) makes the most sense when applied to 'economically Liberal' or 'neo-liberal' capitalism especially.  This makes Capital (Vol I) highly useful for understanding Anglosphere economies which have largely gone down that path.  But admittedly Marx did not anticipate the rise of modern mixed economies, advanced welfare states, Keynesian demand management and so on.  Arguably these could comprise ‘stepping stones’ towards a socialist economy and society – while at the same time ‘stabilizing capitalism’.  (reducing cost structures and the like)   Marx is still highly RELEVANT ; but perhaps he is not on his own SUFFICIENT in responding to modern economic and social problems.

As for arguments that Marx did not recognise the  ‘value’ of Nature (one person at our Facebook Forum argued this) ; that is demonstrably untrue if you understand Marx in context.  Marx defines between use values and exchange values. Hence 'a beautiful rainforest' may have no 'value' in the sense of exchange value ; or Marx's schema of 'value' according to his specific (non-mundane) definition as ‘the labour congealed in commodities’.  But remember this is just a technicality based on Marx's definitions... It does not mean (literally) that Marx thinks 'nature has no value'.  Again; In Marx's scheme 'value' refers to the labour congealed in a commodity. But 'USE VALUES' are something else entirely. Marx recognises that things can have USE VALUE without comprising 'values' according to Marx's particular (contextual) definition. So 'a beautiful rainforest' can have a 'use value' in the sense that human beings can appreciate its beauty. And 'nature' may have the 'use value' of being necessary for the reproduction, health and happiness of the human species. Though it’s true Marx doesn't consider what some might call the 'intrinsic value' of nature.  Deep Ecologists may not find as much of interest to them in Marx.

Similarly “work/life balance” has value ; as do domestic and voluntary labour ; as does education, philosophical and scientific enquiry , and art ‘in their own right and for their own sake’.  But capitalism does not ‘see’ or ‘encourage’ the identification of these – EXCEPT insofar as they can be manipulated to somehow magnify exchange value ; ‘creation of ‘values’ in the capitalist context ; production of surplus value ; the self-expansion and reproduction of the capital relationship on which bourgeois power, privilege (and arguably purpose) rest.

On the 150th Anniversary of Capital (Volume I) it is worth revisiting Marx ; and questioning some common assumptions.  In-so-doing we encounter a thinker still highly relevant for the current day.
Even though some (eg: the ‘Post Marxists’ Mouffe, Laclau and others) have suggested revisions and alterations which are also highly useful, and sometimes inspiring.  The 150th Anniversary is as good a time as any to ‘return to Marx’ and to work out what he’s really saying ; and not just depend on the second-hand accounts of bourgeois-Liberal economists.
Posted by Vaughann722 at 12:04 PM 1 comments