Things to Think About as the Federal Budget Approaches 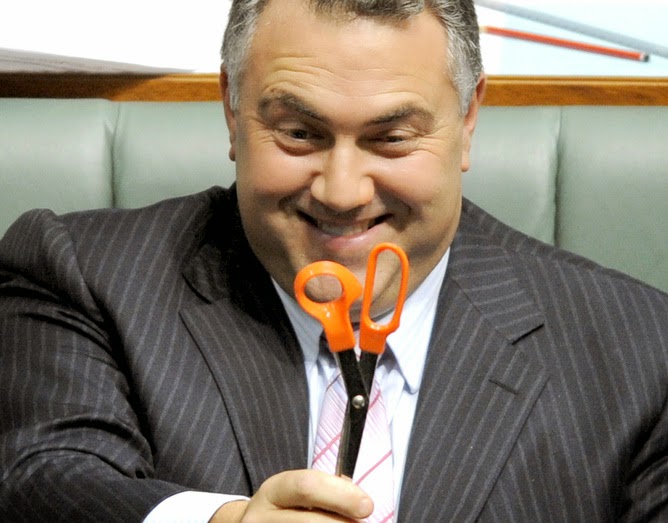 above:  Joe Hockey and Tony Abbott will claim Australia 'is living beyond its means' - but behind this rhetoric there is simply an Ideology of small government - regardless of the human cost.
Tristan Ewins


As the Federal Budget approaches for 2014-2015 there has been speculation to the effect that the Government may resort to PAYE income tax bracket creep or a GST hike in order to fund its spending.   The ALP is rightly critical of any GST option that is not part of a broader progressive package. (perhaps Shorten may not even support a GST increase in any form or context) Increasing the GST base - either generally, or by ‘broadening its base’ to apply to food and health -  could be highly regressive.  But the bracket creep option is also potentially regressive – as low income earners could see themselves pushed upward into higher brackets without any real increase in their disposable income. (Again: it depends on the ‘overall package’ of the tax/welfare mix)


Further, the Government is considering raising the age of retirement, or cutting back Aged Pension eligibility.  Some are also agitating for a cut back in the Disability Support Pension rate – and possibly also eligibility.  That includes the Treasurer himself, Joe Hockey.


The ‘pension option’ is deemed by some to be ‘inescapable’ because of the ageing population, and the ‘incentive’ for people to claim the DSP as opposed to NewStart.


We are living longer, it is true – but it is not true for all of us.  And indeed – while some are living longer – they are also living with loneliness, frailty, and sometimes indignity.   This begs the question why higher Aged Care expenditure is not on the agenda – as opposed to pension austerity.


There is also the question of what matters most in life: the chronic capitalist commitment to endless economic growth regardless of the social cost – or the opportunity for older Australians to enjoy a retirement in comfort and dignity; enjoying opportunities for personal development not possible beforehand during their working life.


Finally – we need to maintain perspective.


‘Deloitte Access Economics’ claimed the Government could save $2.4 billion over four years by limiting increases in the disability pension to inflation.  But when placed into perspective this is pittance to the Government when compared to the effects on the comfort, dignity and relative independence of the disabled.   And even if this amount would grow as the aged population increases,  according to ‘Wikipedia’: “the economy of Australia is one of the largest capitalist economies in the world with a GDP of US$1.57 trillion.”  Despite an ageing population – caring for those people will still be ‘well within our means’.


So while the Disability Support Pension costs “$15 billion a year” and the Aged Pension currently costs $38 billion  – probably rising to $55 billion in 2050  – that needs to be considered in the context of a (current) GDP of approximately $1.6 TRILLION. (Aus dollars; and a much larger GDP by 2050 also!)


Indeed, there is even the danger that the National Disability Insurance Scheme itself may come under threat; or that only those with the most profound physical disabilities will be considered worthy of support by a government trying to ‘wriggle out’ of previous (pre-election) disability commitments.

So while the Government could save some money through attacks on the living standards, dignity and relative independence on the disabled (linking the pension to inflation rather than wages growth), it should be honest that its real motive is not some ‘budget emergency’ – but an Ideological commitment to small government no matter the human cost.


‘Pension austerity’ needs to be considered in the context where all Australian families should benefit from the social insurance paid collectively by all of us – for the sake of our peace of mind – both for ourselves and our loved ones.  And also hopefully because we care about each other as a society.This must include a robust disability pension alongside robust disability insurance.


For those who care about distributive justice, and compassion for the poor and vulnerable, surely there must be better solutions than what is apparently being considered by Hockey and the Liberal Cabinet.


And indeed there ARE better solutions.  Superannuation Concessions could be wound back – and income tax increased on the basis of a progressive restructuring. Tens of billions could be saved here alone.


To elaborate: It is true that tax cuts delivered overwhelmingly to upper and middle income Australians during the Howard years were recently estimated as costing the Budget around $40 billion a year alone.  And as Richard Denniss has argued on several occasions – superannuation concessions have been of benefit largely to the top 5 per cent income demographic (millionaires basically), a well as the ‘upper middle class’; and more broadly are estimated by the Treasury as costing “$45 billion a year by 2015.”


To summarise: The Government has several potential alternatives on the table they could consider – and the Shorten Opposition should be pursuing these progressive options also.


First: Wind back superannuation concessions for the wealthy and the upper middle class, saving tens of billions.


Third:  Increase the GST – but only as part of a ‘total package’ which includes increased welfare, tax credits or other tax cuts for lower income Australians, maintenance of exemptions on food and health, and extension of GST exemptions to funerals as well.  Calibrate the overall ‘tax mix’, here, to deliver more progressive outcomes.


Fourth:  Embrace the necessity of ‘larger government’ if ‘the Australian way of life’ is to be preserved – including a fair age of retirement and protection of the most vulnerable from grinding poverty. In this acknowledge that ‘the size of government’ in Australia is already low by international standards.


Fifth:  If the Government is concerned there is an ‘incentive’ for pensioners to apply for the Disability Pension because of the extraordinarily low Newstart unemployment benefit – then INCREASE NEWSTART to respectable and socially sustainable levels – and acknowledge that while the Disability and Aged Pensions are higher – disability and aged pensioners are still living in poverty!


Budget pressures also need to be considered in the context of a growing infrastructure crisis.


Federal and State Liberal Governments are at odds with construction unions – not only because of  alleged criminality – but more crucially because there IS an infrastructure deficit – which when combined with robust conditions for workers in the Construction industry make it harder to maintain ‘small government’ alongside basic transport, communications and education infrastructure demands.  And construction workers should not have to pay the price for a right-wing Ideological fixation on reducing the size of government.


Regrettably, there is also an Ideological opposition to public housing at the same time as the dream of home ownership has drifted out of the reach of so many young Australian families since the Howard-era housing boom.


Some Liberals had  considered the GST option perhaps because they realise the infrastructure deficit will have consequences that ‘flow on’ to the private sector. (though in Victoria Napthine now rejects the GST option)


We need to consider both the impact upon our competitiveness from the ‘infrastructure deficit’– but also the social cost to poorer families in emerging suburbs which lack transport infrastructure and schools.
Finally, today's Conservatives could do worse than to consider the example of the German Christian Democrats from the 1950s – who embraced a "social market" model. As Eric Aarons has explained,this approach suggested "a social vision couched in moral as well as economic terms…", and "recognition of the fundamentally social nature of organised production". Further, it implied a "moral community" "required to legitimate the social order…" , and the"[prevention] of the emergence of a 'two-tier' society" including a layer of permanently poor. (Aarons pp 33-34)
Christian, 'compassionate conservatives' in the Liberal Party do not have to follow the austere, heartless path of economic neo-liberalism. While this writer is a proud liberal democratic socialist as well as a Christian, sometimes it is necessary to promote lines of communication when so much is at stake. We cannot support this kind of 'neo-liberal class war' against the vulnerable and disadvantaged: a budget which hits the poor and the vulnerable in order to redistribute wealth towards the wealthy and the upper middle class.
Aarons, Eric; Hayek versus Marx And Today’s Challenges; Routledge. New York, 2009
Posted by Vaughann722 at 12:22 PM 0 comments