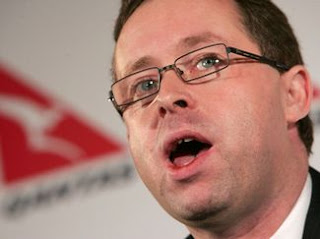 Above:  Alan Joyce is not very popular these days amongst the Australian trade union movement...

In this article Chris White gives his opinion on the recent Qantas lockout in Australia, and the changes he thinks are necessary to the Fair Work Act to prevent lockouts, and protect the right of workers to take industrial action.
Chris White is the former Secretary and Assistant Secretary of the United Trades and Labor Council of South Australia and remains active in the Australian labour movement.

His blog is here:   http://chriswhiteonline.org/


Qantas CEO Alan Joyce, Board Chairman Leigh Clifford from Rio Tinto, Richard Goodmanson Board member and former Rio Tinto Director, and Dr John Schubert a director of foreign multinational -Billiton and former President of the Business Council of Australia (the BCA is the peak body for multinational corporations) not surprisingly militantly employed rightwing anti-union practices with the corporate union busting legal firm of Freehills.
They were most incensed by pilots wearing red ties –unionism! Baggage handlers were stopping for short periods and on TV marching with placards through the airport.  Engineers had responsible limited bans. None were in force on the day of the lock out during so-called ‘good faith bargaining’.


Qantas' aggressive lock out power was to defeat legitimate workers’ industrial action.
The very powerful corporation secretly planned after the to ground the airline without notice to anyone, disadvantaging the flying public and politically challenging the Gillard government.

The lock out was in response to legitimate job security claims


http://afr.com/p/business/companies/what_the_unions_want_1XPzVNsdfoO8ijqgol4e1O.
Now from the ASU


And see this re: the engineering alliance
http://www.amwu.org.au/read-article/news-detail/810/Unions-combine-to-secure-Qantas-engineering-jobs-/

Many unionists now say that employers ought not to have the right to lock out.

An amendment to the Fair Work Act FWA that removes the lock out must be introduced.

The more powerful corporations instead are to be required to negotiate a collective bargaining settlement with their workers.

Qantas management tactics shows why the lock out ought not to be available in any reasonable collective bargaining system.
The unions had to go through technical process requirements, applications to FWA for protected action, ballots with members voting in favour and technical notice processes and constant negotiations. If unions make any technical defect, Freehills seeks that the industrial action is  “unprotected” and huge fines threatened.

However, Qantas management simply plans that after the we will immediately ground and lock out.

Now the Fair Work Act FWA (the same as WorkChoices) allows this management tactic. The FWA has no requirement for the employer to give notice to lock out, nor balloting of shareholders at the and certainly not the processes forced on unions for strikes. This is a serious process deficiency and yet another rule for the 1%.

For our collective bargaining system to work for employees against the more powerful corporations, lock outs ought not to be allowed at all.


Some nations prohibit lock outs on the basis that they tilt bargaining power too far towards employers.
The International Labour Organization ILO principles and most labour relations systems are based on the widely accepted reality that employers have the greater power over their workforce.

In any decent labour law, the lawful right to strike is necessary to afford some ability of workers and their unions to counter that employer power. The lock out as shown with Qantas denies any such balance: the effectiveness needed for workers to bargain in their interests. Gillard claims balance – but this is just spin.

In any case, most employers legally reserve lock outs as a genuine option of ‘last resort’, rather than the Qantas ambush of ‘first resort’.

Some labour relations systems require notice and some balloting of their shareholders. The principle is some notion of ‘proportionality’ to govern the usage of lockouts.

But not in Australia. Our right-wing corporates with their law firms are gearing up to emulate the Qantas tactic against any industrial action.

Unions’ experience is that disputes are not resolved by the lock out but by sitting around the table negotiating an outcome, a real agreement. At the end of the dispute and the industrial action management and their workforce have to continue to work with each other.

Unionists remember. There are long-term consequences.

Workers are in a difficult position facing the lock out. Here is a film of a US workers’ struggle against Rio Tinto’s lock out:

For a reference on lock out read ‘Lockout Law in : Into the Mainstream?’ Dr Chris Briggs University of Sydney acirrt working paper 95.

My next point is to support suspension only of the lawful strike - what the Qantas unions wanted.

The Qantas tactic forced the Minister’s application for an order to terminate protected industrial action rather than suspend it.

Fair Work Australia due to the lock out instead terminated all action. The parties are now in a FWA conciliation process for 21 days.  If no resolution is reached, FWA imposes an arbitrated outcome on Qantas and unions and the workforce. We shall see what happens.
See: of http://theconversation.edu.au/why-fair-work-australia-terminated-the-qantas-industrial-action-4092

The FWA provision is rarely used even when the economy is significantly damaged. On the day I did not believe union action was causing significant damage to the economy, now held to be the case by FWA. But due to the lock out FWA said such action was enough threat to the economy and terminated both actions.

I believe it would have been fairer if the lock out had been terminated and the unions’ protected action suspended.


The Fair Work Act has alternative devices as well as the lock out for Qantas to halt the limited lawful union industrial action. As I write I watch the Senate hearings and Senator Doug Cameron asking Joyce about alternatives and why he did not ask Fair Work to intervene rather than to lock out.

For the employees’ right to strike to be effective, their protected action has to be allowed – to mitigate against the power of the corporations - and ensure a settlement between the parties.

The ability of employers or the Minister to halt protected action ought not be available because it undermines the effectiveness of strike action as a bargaining tool.

Any reasonable collective bargaining regime has to have employees and their unions be able to organise and strike – which we would prefer to be without government interference.

Political dictatorship
I comment about Abbott urging what he would have done, now trumpeted widely by the political right, namely to use section 431 - unprecedented direct Ministerial power to stop a strike.

PM Gillard in the Fair Work Act (FWA) retained WorkChoices’ many repressive measures to stop lawful strikes and this included s431.  I repeatedly argued that all restrictions on the withdrawing of labour have to be repealed for an effective freedom for workers to take industrial action without being ordered back to work.

The FWA sections terminating a lawful strike require at least an independent hearing with evidence and merit submissions before the umpire or a court makes the order – hence the reality of the weekend Fair Work hearing.

But in section 431 of the FWA, the Minister simply has to form an opinion about damage to the economy and then proclaims the termination of protected action - no independence, no evidence, no merit argument, no process is required – simply the Minister not liking a strike and employers asking him to stop it.

This political power to affect the lives of workers and their right to collective bargaining and to strike is an outrage.

I criticized Howard for introducing s431 into Work Choices after lobbying by the rightwing mining corporations such as Rio Tinto. Gillard should not have been retained it in the FWA. It has not been used and rightly would be subject to legal challenge. Section 431 breaches existing international standards.

Only a political dictator would use it. Abbott is proud to say this is how he will act. Section 431 and indeed all of the Work Choices anti-strike provisions have to be repealed.

On 71% Joyce salary increase, the Gillard government’s reforms to CEO salary rises is proved to be inadequate and again this Parliament has to act.

Overall what Qantas does is how corporations work in this capitalist crisis outsourcing jobs and why workers and their unions reasonably resist.