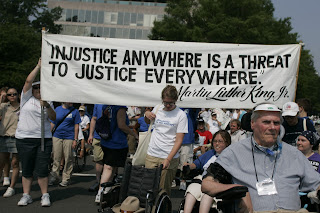 Helen Said, an Australian socialist activist has written to us asking us to help an important "cause [become] better known around the Left."   Specifically she is concerned with "the issue of the 'Supported Wage System' which is embedded into most industrial awards."  As she explains: "The System involves paying a worker with a disability a percentage of the award, depending on how they measure up in a productivity assessment. The worker is then asked to enter into an "agreement" to work for a lesser rate of pay and regularly reassessed. Their pay can be cut at any time through such reassessment."  Helen believes this system is unjust; and the following article explains why...
AND BEFORE YOU CONTINUE!!: If you enjoy this article PLS join our Facebook group - to link up with other readers, and to receive regular updates on new material.

The Supported Wage System allows employers to legally underpay workers with disabilities, depending on how they measure up in a DEEWR productivity assessment.

The federal government’s Job Access program portrays this ruling as part of a progressive package of egalitarian policies, like funding workplace accessibility improvements. The Job Access website describes The Supported Wage System as “a process that allows employers to pay less than the award wage by matching a person's productivity with a fair wage.”
http://www.jobaccess.gov.au/Services/A-Z_list/pages/Supported_Wage_System.aspx

The Centrelink Website further elaborates: “This system incorporates a process of productivity-based wage assessment. For example, if a person involved in Supported Wage System (SWS) is assessed as having a productivity level of 70 per cent compared to co-workers performing the same duties, the worker and the employer can agree to ongoing employment at a pay rate of 70 per cent of the normal rate.”

The Job Access website hails case studies of two workers with disabilities, who earn 70% and 80% of their respective award’s wages, as SWS “successes”. One of these workers was described by her employer as being “able to perform her duties with limited supervision, is reliable and is considered one of our best back area staff, able to cope with busy workloads and she demonstrates that she enjoys her job.”

Yet these are not the attributes that employers and governments consider in deciding how much to pay employees with disabilities. As described in numerous federal government worksites, including this Fair Work Australia report, the sole criteria in deciding how much a worker with a disability gets paid is productivity as measured by a DEEWR-contracted assessor.
http://www.fwa.gov.au/sites/wagereview2010/research/5_2010_diability_report.htm

According to this report “an employee assessed at 10 per cent capacity would have a minimum wage of 10 per cent of the relevant classification wage specified in the award.” This legalised work-for-pocket-money industrial legislation goes against the grain of the equality and deinstitutionalisation policies which operate in every other sphere of society. People with disabilities are being brought up to participate in all aspects of life as equals. Many marry and have families to support. Our industrial legislation on wage levels hasn't caught up. If anything it is going backwards.

Since its inception in 2005 approximately 5000 DEEWR productivity assessments have been carried out on workers with disabilities annually. The majority of SWS participants are male and aged between 15 and 25, mainly living in Queensland, NSW and Victoria. They typically have “intellectual learning disability,” and work an average of 20 hours per week, mostly as trades assistants or factory hands. Assessments of capacity between 40 per cent and 70 per cent are most common, and the average assessed capacity is 53.3 per cent.

Before undertaking an initial SWS assessment to determine the percentage of the award a worker will earn, the worker may be employed on a trial basis of up to 12 weeks for as little as $71 per week, with a possible extension of a further four weeks. This provision effectively grants employers the right to employ workers with disabilities on a casual basis at third world rates of pay, with no chance of ongoing employment, if these workers are deemed to have failed their “trial”.