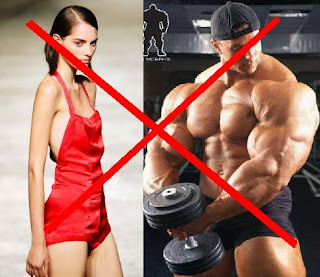 above:  Unrealistic expectations for both women and men these days?

In this week's article Tristan Ewins argues that modern day discrimination and disadvantage is multi-faceted - both for women and men in different contexts.  In response he rejects gender essentialism, and proposes the socialist ideal of equality for all.

Recently wide-spread outrage arose in response to a report from the Workplace Gender Equality Agency that the annual gender salary gap had risen from $2000 a year in 2011 to $5000 last year.

Even though by contrast ‘Graduate Careers Australia’ asserted that a 2010 survey had found a wage gap of 3 per cent.

I am not in a position to adjudicate between these claims; yet even aside from this it is generally undisputed that women’s pay suffers relative to men’s both as a consequence of the undervaluing of sectors considered to be ‘women’s work’ (eg: child care, community services); and also as a consequence of a usually-interrupted working life.  (with flow-on effects for superannuation savings as well)  For most women arguably these injustices are more pressing than the “glass ceiling” suffered by women executives: though they are also harder to remedy.

A progressive victory within Federal Labor has seen $2 billion devoted to improving the pay of (mainly women) workers in the community services sector.  While Labor has responded to ‘the tip of the iceberg’ here  - it is a real start on the way to reform.  (see: http://www.theage.com.au/national/pm-concerned-by-gender-pay-gap-20130105-2c9pp.html )

And yet another headline in ‘The Age’ seemed to attract less attention in other media.  Therein, an article proclaimed that discrimination against men on the basis of physical appearance and ‘attractiveness’ was rife.

“The first Australian study of the financial return to physical attractiveness finds its worth an astounding $32,150 in annual salary, with men of above-average looks typically commanding $81,750 compared to $49,600 for men with below-average looks.”

This had me thinking a lot about ‘invisible’ discrimination and disadvantage in Australia, as well as overseas.

The extent of the discrimination raises the question why such discrimination has not been taken more seriously in the case of men more often; and why issues of male body image are generally not taken as seriously as women’s body image.

Disadvantage is generally addressed today through the lens of identity. In the wake of the identity movements arising from the 1960s, and the decline of the industrial working class, feminist aspirations and struggles, as well as the fight for sexual freedom and equality have largely displaced the importance of class in the Left’s ‘political imagination’.  There has been a steady progression of victories; though eventually the largely identity-based struggles have been co-opted into more ‘capitalist-friendly’ channels.

But the question of discrimination on the basis of appearance – and its relative neglect – shows we are a long way from equality – and that the main priorities of the modern liberal Left are neither exhaustive or sufficient.  A man and a woman suffering poor body image, or looks-based discrimination may in fact have more in common with each other than with other women and men.

Similarly, the class standpoint has been de-emphasised by the modern liberal Left .  In the United States alone an impoverished ‘fifth estate’ is largely excluded from recognition in political and cultural discourse as a consequence of that nation’s “middle class self-image”, and its dependence on poverty and stratification to swell the ranks of its military; to ‘clear the labour market’; and to edify middle class living standards through the exploitation of this underclass.   What is more; this ‘fifth estate’ is divided within – and vilified from without - as a consequence of racism and class-based prejudice. (sometimes as much against so-called ‘white trash’ as against  African and Hispanic communities)   The Democratic Party itself is sometimes complicit in this exclusive ‘middle class political self-image’; and the stigma against class politics in Australia is similarly damaging.

More controversially, though, this had me thinking again about the critiques of Conservative social commentators such as Miranda Devine and Kevin Donnelly on the question of boys’ education. These commentators have generally trashed the cause of liberal education – education for active and critical citizenship – which I hold very dearly.  While literacy and numeracy – championed by Devine and Donnelly -  are important; these columnists seem to view the cultivation of critical faculties as comprising ‘left-wing indoctrination’.  (For my critique of Donnelly see: http://leftfocus.blogspot.com.au/2012/11/reforming-australian-curricula-why-is.html )

Donnelly has gone so far as to claim that (what I would define as) critical/liberal education disadvantages boys – as they respond better to ‘education by rote’.
Oblivious to class-based disadvantage, meanwhile, Devine fails to appreciate the nexus between educational opportunities and the human and other resources provided for State and disadvantaged Catholic schools.

But in 2011 Devine made some telling observations which as far as I am aware still stand today.  In wake of the 2011 NSW HSC results Devine observed:

“In photographs of the 107 students who scored the highest marks in the state, girls achieved 66 per cent of the top honours, though comprising just 52 per cent of HSC enrolments.”

And with regard VCE results in Victoria, Devine explained:

“In recent years, girls have been the strongest performers, achieving 55 per cent of tertiary rankings over 90. Last year of the top 20, 11 were girls schools and only three were boys schools… In 2002, an inquiry found boys lagging behind girls in literacy, numeracy and Year 12 exam results, and that they were less likely to complete high school or go to university.”  (See: http://www.dailytelegraph.com.au/news/opinion/girls-hsc-results-a-lesson-for-boys/story-e6frezz0-1226222230853 )

The same report observed that only half the number of young men as compared with young women graduated in the fields of Arts and Law; while almost 80 per cent of Education graduates were women.

No doubt research on the influence of social class would also underscore sources of educational disadvantage; as would analyses focused on indigenous participation, and disadvantage amongst some migrant communities.

What emerges from all of this is a very complex scenario.   Both women and men face discrimination and disadvantage in different ways and to different degrees.  Such structures of disadvantage and discrimination overlap with factors of class, ethnicity, disability and - to a great and usually-unrecognised degree - appearance.

Meanwhile; as opposed to the ‘education for conformity’ that some would like to see in our schools, participation in Arts and Social Sciences is crucial - because these disciplines impart the skills and intellectual tools for critical thinking and civic activism.  This is not ‘brainwashing’; it is about imparting critical faculties vital regardless of ideological orientation.  Arguably positive male role models for young boys at school is also important.

Academic excellence is not everything. We need ‘education for life’ just as much if not even more.  But this needs to be more than narrow vocationalism.  Civics and Citizenship education, ‘for civic participation’, for ‘cultural appreciation’ – and indeed education and culture FOR  THEIR OWN SAKE – needs to be cultivated as rights for all Australians; indeed for all humanity.   But insofar as the measurement of academic excellence remains the most important factor in determining tertiary participation we need a discourse on how to ensure equal opportunity for all.  And lapsing back into the kind of gender essentialism which used to rationalise discrimination against women is not the answer either.

Disadvantage for boys; and discrimination against women and men on the basis of appearance need to be taken seriously – and are just as important as more traditional critiques of gender discrimination.  Power relations are complex and multi-faceted – and lack of compassion, respect and consideration – can ‘cut both ways’ - systemically and socially, and in our most intimate personal relations.

An early definition of Socialism was “equal association”. We need respect and opportunities for all – to overcome social ‘fault-lines’ where-ever and however they arise

Other news for this week...

In further news the 'great surprise' of the week was that the following letter was not published by the Melbourne Herald-Sun in response to a Jeff Kennett article taking the usual line, beating up a panic over public debt in Australia. (which is very low by global standards...)

"In Wednesday's Herald-Sun Jeff Kennett bemoans public debt in the US and Australia. He fails to mention, however, that the bulk of US public debt can be attributed to military (including Reagan era, Cold War related) expenditure, and Bush-era sweeping tax cuts for the ...wealthy. He also neglects the necessary role of public investment in providing counter-cyclical stimulus, and in overcoming capacity constraints and skills shortages via education, health and infrastructure. Finally, Kennett neglects the role of collective consumption - provided most fairly via progressive tax - in providing the best value infrastructure and services for the public. Australia already has 'small government' by global standards. A mixed economy and strong public sector can provide the highest living standards for citizens as the sucessful Scandinavian, Danish and Dutch economies prove abundantly."

Meanwhile we also discussed Jenny Macklin's response to the woefully inadequate Newstart payment. (unemployment pension.)   Macklin had earlier asserted she could live on $35/day - which she now accepts was "insensitive".  Left Convenor, Doug Cameron came out arguing this was not characteristic of Macklin, and arguing instead for an increase in Newstart by $50/week.  In my opinion Macklin is probably being 'hauled into line' by Cabinet here.  Hence my response:

"Next step is to actually change the payment... We already have active labour market programes re: Newstart; arguably they already go too far; There is no excuse for 'punitive welfare'. Cabinet should give Macklin leave to say what she really believes on this issue... Doug Cameron making some encouraging statements..."

And then: [arguing that it's all just about getting people into jobs is] "spin, yes - Like most politics these days on all sides. In reality a grossly inadequate payment with the result of social isolation, disengagement, depression; While lack of funds for communication and transport actually inhibits job searching; And 'active labour market programs' already have job-searchers jumping hoops every week. Already it amounts to labour conscription. But resentment against the unemployed has been built up by reactionary forces in this country over decades... Still the relegation of many disability pensioners and sole parents to the payment also deserves scrutiny. The government has 'robbed Peter to pay Paul' for many years now. Probably behind the scenes Macklin has resisted all this; But we need more leading Labor people coming out in the open for a different agenda."

AS USUAL - debate is welcome - whether you want to discuss the main article; or Newstart and Macklin and Cameron's comments; Or my response to Jeff Kennett on the bogey of Economic Management.....