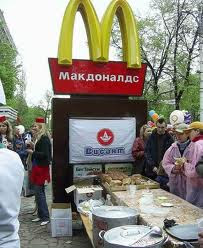 above: 'progress' in the new Russia
In this submission by Russian political economist, Boris Anisimov (translated from Russian to English), the author considers the pitfalls of economically liberal capitalism as experienced in post-Soviet Russia. While command economies could be deeply flawed, it seems the indecent haste in adopting a Western economic model in Russia has involved an abandonment of those insights from the Marxist tradition which remain crucial. For our Western readers this contribution provides an appreciation of a perspective we are rarely exposed to…
by Boris Anisimov   (edited by Tristan Ewins)

In my previous articles, I have expressed quite unequivocally my indignation that market fundamentalism had been accepted by emerging economies as the official economic ideology. As years go by, it becomes evident that the reckless opening of developing, and thus still fragile economies was serving the purposes of countries which have many decades, if not centuries, of deliberate protectionism to their names.

For this post, I am going take Russia, my home country, as an example again, but what I am going to address now relates to many developing countries and even to some of the developed ones.

The younger post-Soviet generations raised by TV commercials and glossy magazines appear to be at a loss as to what is happening to the global economy. As they grow older, a large portion of them begins to realize that, with the way things are going economically, their adult life will be no picnic at all. The temporary euphoria of the boom years has faded, but no new hope has come. Most young people do not see any light at the end of the tunnel, and this hopelessness acts as nationalist street gangs' best recruiter.

The economic reality does not match the elegant theories meticulously translated from English-language economics books. Economists recognize the existence of the massive gap between the prosperity of the economically-advanced countries, and the utter devastation of their own economy. But as they attempt to identify the underlying causes, they fall back on the same theories that made that devastation possible in the first place. The years of new post-communist economic propaganda have certainly left a trace, but very few realize that this trace only leads to destitution.

The ironic thing is that some of the answers to today’s most fundamental economic questions these young people of my generation might have can be found in what our fathers eagerly put on the shelf of history: i.e. political economy. In Soviet times, political economy was sometimes compromised in supporting the government of the day - and, as a result, was unsuitable for meaningful economic analysis. The numerous economic crimes committed in its name have discredited political economy in Russia. The desire for material possessions and comfort combined with unceasing, aggressive advertisement of consumerism fostered a new culture unwilling to heed the lessons of the past.

In that frenzied strive to pull themselves out of poverty and despair, our fathers forgot to pass to us the knowledge that they did possess back then, but considered irrelevant because they did not know how to improve their lives with it.

So these are some of the things about the economy that our fathers did know but did not tell us:

1. Our fathers did not tell us that no market can be 100% free. Even though, with reservations, some markets back in the days were close to that ideal, most economies have never become free of any governmental influence. Look at 19th-century Britain, considered by some the “cradle of free-market capitalism”, where the government did not interfere with market forces directly, but was the generator of a significant portion of the solvent demand on local markets by means of spending up to a quarter of the country’s budget on the famous Royal Navy. I hope it is clear what financed numerous orders with local entrepreneurs and craftsmen and made up for embezzlements by navy and treasury officials – the plundering of colonies did.


2. Our fathers did not tell us that market is only a mechanism for distribution of material and financial resources within the economy, not a panacea for economic problems nor a condition for economic development. Markets work when there are resources to distribute, not when an economy is resource-barren.


3. Our fathers did not tell us that any development of a capitalist economy is only possible with massive concentration of capital. Only countries that see significant inflows of material and financial resources for an extended time can show ‘miracles’ of economic and social development. Technically, it does not matter where that capital should be coming from: foreign demand for local products, investment from other countries, an issue of money backed with national debt, foreign debt, the plundering of colonies, etc. No economy whose capital is being drained out has a chance of pulling itself out of the gutter. If the local solvent demand is low and does not generate sufficient profits, while access to foreign markets remains limited, such an economy is doomed to debt slavery and living from hand to mouth by selling raw materials.

4. Our fathers did not tell us that capitalism requires constant growth. If no further growth is possible for whatever reason, capitalism starts falling apart at the seams and looks for ways to expand by force regardless of how many thousands of human lives that expansion is going to ruin.

5. Our fathers did not tell us that a bourgeois democracy is a democracy of the rich only. Figuratively speaking, the poor are never invited to the party in the first place. It is fat cats that make decisions in corridors of power, in corporate offices of industrial giants as well as on trading floors of stock and commodity exchanges.


6. Our fathers did not tell us that social development is based on economic development and comes with a hefty price tag - which the impoverished masses cannot afford. Reforms get easily stalled when there is no one willing to foot the development bill. Besides, it turns out that mentality comes with a price tag too. It is not enough to adopt a new law or start one more bureaucratic initiative to effect positive changes in the way people think. Revolutionary ideas and innovative breakthroughs will require a substantial economic foundation and enormous expenditures. A civilized society with the rule of law and respect for a fellowman's property rights is never possible if it is only a minority that has any property and rights.

7. Our fathers did not tell us that political freedom does not guarantee prosperity It is one thing to have one's freedoms inscribed on an official piece of paper decorated with coats of arms and sprinkled with cheesy democratic slogans. But to exercise one's freedoms is quite another thing - especially when you are mired in abject poverty. The mighty golden calf opens up doors that will forever remain shut for the less fortunate. (Editor; I assume by this the author is suggesting some kind of corruption) Paying your way through red tape solves things faster, connections with the right crowd protect better than a court ruling, and expensive PR compaigns usually generate higher turnouts at polling stations.

8. Our fathers did not tell us that “business” and “economy” are not the same thing. The economy is a system developed by society to provide for their material and some spiritual needs, while business is merely the art of money-making and is only interested in financial returns at any cost. In prosperous times, businesses eagerly take what the economy can offer in order to thrive and proliferate. But when hard times come, businesses do not give a damn about the economy nor the society with its material and spiritual needs. They still care for returns, and that is true for both small and big businesses.


9. Our fathers did not tell us that debt can be an effective way of postponing crises of over-production by stimulating fictitious demand, which I define as solvent demand beyond the natural limit of consumption, i.e. beyond one’s means. As credit rates fall as a result of boosted money supply, the economy continues to grow and everybody is happy – until the next crisis breaks out.

Boris Anisimov is a Russian political economist and writer

AND FINALLY!!: If you enjoy this article PLS join our Facebook group - to link up with other readers, and to receive regular updates on new material.
see: http://www.facebook.com/group.php?gid=58243419565
Posted by Vaughann722 at 10:15 AM