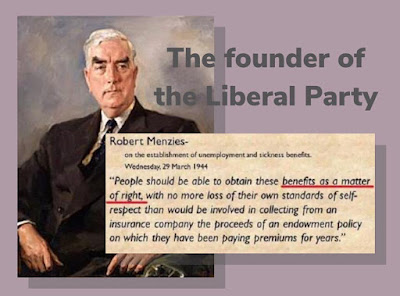 Much is said about the clash between the liberal and Conservative wings of the Liberal Party of Australia. Usually leading figures will speak of a ‘broad church’ which includes a diverse membership. But the truth is that the Liberals continue to drift ever deeper into the hard Right. Liberals will stand up for religious liberties (which there may be some kind of argument for) ; but John Stuart Mill would turn in his grave if he was aware of Liberal policies on trade unions, charities, and attempts to shut down grassroots mass organisations such as GetUp!


The Encyclopedia Britannica identifies various rights as central to Classical Liberalism. Freedom of association, assembly and speech amongst them. Also: “freedom from fear of reprisal”, and of arbitrary arrest and punishment. It also identifies free industrial organisation of workers as a necessary counter-balance in the marketplace.

Interestingly, iconic British liberal John Stuart Mill was even in some ways sympathetic with the socialist social experiments of Robert Owen in the 19th Century. (see: ‘On Socialism’, J.S.Mill, Prometheus Books, New York, 1976)

And while free markets are crucial to classical liberalism, various liberals are divided on the balance between public and private. All liberals would oppose a ‘command economy’, and would demand a central space for ‘personal determination of needs structures via markets’. For some liberals, however, Hayek and Rand are seen as occupying ‘the extreme end of the spectrum’ ; but those theorists’ ideas are exactly those promoted by the Institute of Public Affairs - which has a powerful role influencing Liberal Party policy. Before the 1970s, Hayek and Rand were ‘on the fringes’ in most Liberal and Conservative parties. Fanatical commitment to the progressive and open-ended dismantling the welfare state, social wage, social insurance and public sector would have once have been ‘out of place’ in ‘the Party of Menzies’. Now those ideas are in ‘the mainstream’. And for Conservatives, adherence to economic neo-liberalism has eclipsed ‘compassionate conservative’ tendencies.

By contrast with the original liberals, today’s Liberal Party of Australia is committed to the total dismantling of the power of organised labour. Its ‘Ensuring integrity’ Bill has several aims. Firstly, the bill (if passed) will take non-protected industrial action as being ‘criminal in nature’ ; and union leaders could thus be charged and imprisoned ; and unions themselves deregistered and ‘dismantled’. It will enable government to “sack” union officials convicted of criminal offenses: which includes ‘industrial’ offenses such as unprotected industrial action, and entering workplaces to organise or inspect working conditions without notice. Also: even ‘protected’ rights to industrial action will be able to be withdrawn if an ‘interested party’ argues it affects their interests. The legislation will establish in many ways arbitrary punitive powers for government against workers and union officials. While freedom to withdraw labour is a liberal right ; so too is freedom of association.

The Liberal Party is also now endeavouring to have mass-based progressive lobby group ‘GetUp!’ considered a branch of the ALP and the Greens ; and hence to restrict its rights to campaign in the lead up to elections, and on election day. With a membership base of over a million Australians ‘GetUp!’ is obviously much broader than the ALP or Greens, and has organisational independence. But these days the Liberal Party is simply interested in shutting down all opposition in a display of crude power politics. This is the opposite of liberalism ; even if defined narrowly as ‘classical liberalism’. True, the Liberals abrogated liberalism when they attempted to ban the Communist Party under Menzies as well.  ('Doc' Evatt's defense of the liberal rights of Communists was an important victory for Labor at the time)   But the Communists never had over a million members: mums, dads, students, retirees. People who want a political voice: but many of whom are not ready to join a Party.

Another example of Liberals abrogating liberal principles regards their treatment of charities and other organisations who must fear their tax-deductibility status being withdrawn if they criticise the government. ‘Political’ speech is seen as compromising the work of charities by the Liberal-National Coalition ; but in fact this is just another rejection of real free speech: sacrificed on the altar of brute power politics. Despite a decision by the High Court upholding the right of civic organisations like charities to engage in political advocacy, the Liberals and Nationals are still looking for ways to shut-down resistance. Arguments have been made to ‘withdraw support’ for organisations ‘out of step’ with majority opinion. (whatever that is)

The other side of this involves calls on the Left to tax churches ; which may include lay organisations at the grassroots level. While the Liberal Party has largely abandoned liberalism in practice, the Left could do worse than to integrate liberal and socialist principles.

Finally we must consider the treatment of refugees and the unemployed by callous governments of the Australian Right-Wing. Open-ended incarceration with the effect of breaking the spirit and the will to live of those affected has no place in any account of liberal human rights.

Meanwhile, ‘Work for the Dole’ comprises a form of labour conscription, and we must consider the real power relationships underlying these arrangements – as opposed to the fantasies of Hayek and Rand who only see ‘individuals freely entering into voluntary economic relationships’. Sophisticated liberals deal with ‘the world as it is’ and not merely as it is supposed to be in the theories of the economic hard right. In reality, both major parties are supportive of a policy of a “non-accelerating inflation rate of unemployment”. (ie: unemployment of approximately 5% with the point of containing inflation and wage pressures) The point of this is exactly to restrict workers’ bargaining power at a time when the unemployed are vilified, wages are stagnant, and there is restricted consumer demand in the broader economy. (in turn impacting on growth)

In times past liberals would be capable of recognising the real-world imbalances of power in economic relationships: and hence support rights for trade unions, and a decent welfare safety net without punitive, unfair and unrealistic mutual obligation provisions.

While some Conservative figures like Barnaby Joyce are finally recognising the threadbare and punitive nature of ‘Newstart’ unemployment insurance in Australia, Prime Minister, Scott Morrison, is determined to keep existing policies as a wedge against Labor. While 'Robodebt' policies drive innocent people to desperation and suicide, the hope of decent bipartisanship has been cruelly crushed. An ugly sentiment against the welfare-dependent and job seekers has been whipped up in the monopoly mass media in Australia for decades. But the Liberals have all-too-readily seized upon the consequent public sentiment ; and have exploited it.

While progressives should always prefer a Labor Government to a Liberal Government in Australia, it is to be hoped that genuine liberals like John Hewson - who have not been ideologically captured by the Institute of Public Affairs – improve their fortunes in internal debates. While this author is opposed to Blairite ‘Third Ways’ it would nonetheless be a relief to have bipartisanship on issues of basic human liberty and decency. While the Liberals increasingly embrace Hayek and Rand on the economy, on social liberty they are effectively against libertarianism. (eg: on the rights of organised labour)

In Australia the nominal party of liberalism is anything but liberal. Even in the narrow sense of classical liberalism they fail to uphold core principles. Labor could reconceive of itself as a liberal Party ; and occupy that space abandoned by the Liberal Party. But for social democrats and democratic socialists that is not the answer if it means abrogating our own historic principles, and the rights and interests we defend. But a more libertarian position on liberal rights on the Australian Left would apply significant pressure to the parties of the Australian Right. To a some degree this is already happening. It is a trend that needs to be developed further.
Posted by Vaughann722 at 3:05 PM 0 comments