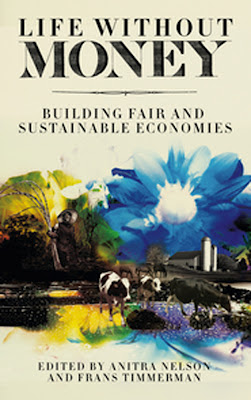 above: 'Life without Money'

The following book review explores the themes covered in the recently published book,               'Life Without Money'.  'Life Without Money' is edited by both Anitra Nelson and Frans Timmerman.  Anitra herself provides this glimpse at the themes explored in a book which seeks a way beyond market and money economies - towards a co-operative and sustainable future.  This review is reproduced with her permission.

When Time magazine announced “The Protester” as 2011 Person of the Year, we had to ask: Is this a signal of radical worldwide change? Did something special start to stir in 2011?

Certainly 1911 was such a momentous year: cities fell like dominoes across China so that, on New Year’s Day 1912, Sun Yat-sen became the provisional president of a liberal republic; civil strife was breaking out in Mexico, by May ending Porfirio Diaz’s dictatorial reign from 1877; and, in Russia, a brief restoration of conservative order was crumbling under the onslaught of Bolshevik and anarchistic activities. Lenin observed “increasing signs that the era of so-called peaceful bourgeois parliamentarianism is drawing to an end”.

Of course, it is only due to the dizzying events which followed through that decade and culminated in revolutions in all three countries – and more – that 1911 is now recognised by historians as such a momentous year. Still those alive at the time felt the winds of change. In some parts popular wisdom blamed Halley’s Comet, which had appeared in April 1910.

When New York’s Mayor Michael Bloomberg ordered police to clear Zuccotti Park of Occupy protestors on 15 November he called on the protesters “to occupy the space with the power of their arguments”. Starting out in the North as a movement against corporate greed, the Occupy movement quickly developed demands for grassroots democracy. The economic became political. But right at the moment it seems to have fizzled out. Or is this the quiet before the storm? What arguments might fill this space?

Whether or not 2011 becomes known as the turning point will mainly depend on whether or not the “99 per cent”, as we have nominated ourselves, take up Bloomberg’s gauntlet. It’s rather hard to imagine, with mainstream politics focusing on unremarkable presidential electioneering in North America; a pretence by the Australian media that Julia Gillard must fall and a real (read “male”) leader, such as Kevin Rudd or Tony Abbott, take her place; the UK and Europeans struggling with integration as a real, not simply nominal, Eurozone; and hard-fought-for “freedom” in the Middle East looking more and more like a mirage. Sorry, Lenin, world bourgeois parliamentarianism still seems alive and strong.

However, the 10 contributors to a new book, Life Without Money: Building Fair and Sustainable Economies, offer strong and radical responses to defenders of capitalism and the so-called “free world”. Most are activist scholars in universities in the UK, USA, Spain and Serbia. Both the book’s editors are Australian. They set out money-free models of community-based governance and collective sufficiency, arguing that production for trade contorts and destroys humane and natural values. They offer strategies for undercutting capitalism by refusing to deal in money, arguing that we need to replace monetary values and relationships by accounting directly in social and environmental values.

There are numbers of alternative communities, as well as movements such as squatting, freeganism and collaborative consumption, experimenting with non-market models. A decade ago they might have been considered marginal. However, their activities are gaining greater currency (pardon the pun) and coming into sharper focus as capitalists and workers alike fear more and worse instability in global financial markets. All this uncertainty, endemic to any market economy, threatens the viability of businesses, job security, house prices and home ownership, the worth of assets and superannuation savings. It makes people question the basis of our economy within which money is the operating principle, dominating value and determining so many relationships.

Even those of us who are not managers or workers are intimately integrated into the monetary system; everyone’s fortunes seem to rise and fall depending on satiating Mammon. The other failing of the economy is in not – or only very inadequately – accounting for environmental factors: increasing carbon emissions in the atmosphere leading to global warming, heightening the frequency and intensity of bushfires and floods; the erosion of natural ecosystems from deforestation; and the exploitation and pollution of the world’s oceans.

Environmental crises – runaway carbon emissions being but the tip of the iceberg – pose a massive threat to capitalism by laying bare the simplistic and inefficient rigidity of a system of production and exchange that focuses on price signals and that depends on growth. For the North, overconsumption is a very real sustainability-cum-economic challenge: if everyone decided to live modestly capitalism would disintegrate. Growth is capitalism’s Achilles’ heel. While overconsumption in the North demands that we develop less materialistic ways of living, it is simply impossible to imagine either individual entrepreneurs or national GDP “degrowing” without a planned economy, at which point we have only two options.

There is the option of state planned economies, which are out of favour among left and right alike. The problem with planned economies is working out how everyone gets a say in what is produced. If distribution is more on the basis of need, it would appear that money has little function. If we were to have less we would be very concerned to make sure we had enough and the kinds of things we feel we need, or badly want. Could we really leave such decisions to the kinds of politicians we have today?

No, we’d like a direct say in how we live.

Non-market forms have the distinct benefit of offering individuals and neighbourhoods economic democracy. It is precisely the importance of such democracy that lies at the heart of Occupy movements worldwide. Occupy politics focus on general assemblies (GAs), allowing everyone a say in decision-making. Clumsy, you say, impossible, not feasible. You’re right, under current economic conditions, under capitalism.

But the economic infrastructure of a world in which we could all have a say in how we live our lives is sketched out in the final chapter of Life Without Money, which builds on key arguments and examples in previous chapters to offer a model of a “compact society”. “Compact” because all the main relationships and structures would be based on legally enforceable voluntary agreements, rather than monetary contracts.

Instead of establishing tiny self-sufficient households, we’d work collectively, with a range of connected local households occupying a basic unit of a neighbourhood, the size of which would be flexible and dependent on the local ecology. Local collective sufficiency would be the key aim of every neighbourhood, sourcing materials for, and making, food, clothing and shelter as well as other basic needs, through appropriate technology. Of course, there would be likely to be needs or wants that people could not source or create locally. Ideally, these would be obtained from a neighbouring area or through the least environmentally and socially expensive option available at the time.

Establishing and maintaining collective sufficiency would require every individual to work out what they would need over a year, assessing local potential, planning how to meet the needs listed, working out how surpluses might be generated, and negotiating with other units to fulfil their needs. The internet facilitates this kind of collective research, planning and negotiation, which would involve numerous compacts.

In 1990 the Global Commons Institute established the idea of addressing the problem of global climate change by a contract-and-converge strategy – contracting emissions and converging by demanding big reductions from the largest polluters so everyone ends up with a similar carbon footprint. A contract-and-converge strategy can be applied to achieve fair and equitable production and distribution in a money-free world. We’d need to redistribute power over the means of production in a radically fair way.

A main focus of the Occupy movement has been working out how to develop and embed processes for direct decision-making. Only by expanding such experience can we decide what practices work, are efficient, effective and really democratic. At the same time, as developments that stimulated the Occupy movement show, the economic systems by which we live have to be reclaimed as our cultural inventions.

A massive decade of engaging with our current economic, environmental and political challenges might well have just started.


Anitra Nelson is an Associate Professor in the School of Global Studies Social Science and Planning, RMIT University, and co-editor of Life Without Money. She will be a Visiting Scholar in the Economics Department of the New School for Social Research in New York, March to May 2012.

This article is an expanded version of a guest post, “Occupy! and Radical Politics Part 2 – Beyond Money”, which appeared in a series at the Pluto Press Blog on 21 December, 2011.
Posted by Vaughann722 at 8:01 PM 10 comments