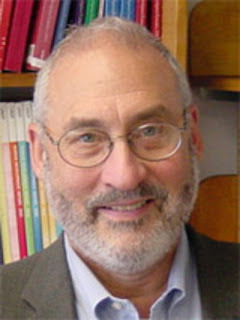 Above: Renowned Economist, Joseph Stiglitz
In this article Joseph Stiglitz praises the efforts of the Australian Labor government in warding away recession as a consequence of the Global Financial Crisis. (GFC)   Stiglitz is one of the most respected economists in the world; and his endorsement ought mean a lot for Australian voters considering economic management as a key issue in deciding their vote.

Although not given permission to reproduce the article in full, I believe is it critical to 'get the message out': the Liberals' fear campaign on debt and spending is deceptive to the core.  Their policies would have seen Australia into recession.  I encourage readers to follow the link at the bottom of this excerpt to have access to the full version.


CANBERRA – The Great Recession of 2008 reached the farthest corners of the earth. Here in Australia, they refer to it as the GFC – the global financial crisis.

Kevin Rudd, who was prime minister when the crisis struck, put in place one of the best-designed Keynesian stimulus packages of any country in the world. He realized that it was important to act early, with money that would be spent quickly, but that there was a risk that the crisis would not be over soon. So the first part of the stimulus was cash grants, followed by investments, which would take longer to put into place.

Rudd’s stimulus worked: Australia had the shortest and shallowest of recessions of the advanced industrial countries. But, ironically, attention has focused on the fact that some of the investment money was not spent as well as it might have been, and on the fiscal deficit that the downturn and the government’s response created...

For the rest of this article follow the URL below!

nb: Joseph E. Stiglitz is University Professor at Columbia University and a Nobel laureate in Economics. His latest book, Freefall: Free Markets and the Sinking of the Global Economy, is now available in French, German, Japanese, and Spanish.

AND ALSO: If you enjoyed this article PLS join our Facebook group - to link up with other readers, and to receive regular updates on new material. see: http://www.facebook.com/group.php?gid=58243419565
Posted by Vaughann722 at 11:15 AM