Sport: The Last Refuge of Community in Our Society ? 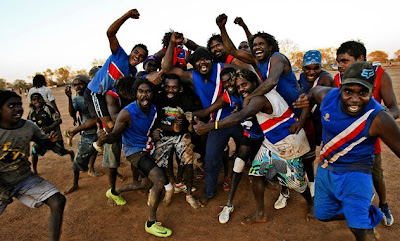 above: Indigenous Australian football players
Firstly: Happy New Year both to regular and new readers. :)  The following article - our first for 2011 - is an exploration by past-contributor Geoff Drechsler - of the decline of community in modern society (especially Australian society)  - and of the potential place of sport in rectifying this.

AND BEFORE YOU CONTINUE!!: If you enjoy this article PLS join our Facebook group - to link up with other readers, and to receive regular updates on new material.
see: http://www.facebook.com/group.php?gid=58243419565

Revolutionary killjoy, Leon Trotsky believed that sport was an inappropriate diversion for the toiling masses from the erstwhile business of politics. Comrade Leon would be in a philosophical quandary if he ran his eye over 21st century Australian society. In our atomized society, we compete against our co-workers for the next step up the corporate ladder, then do a solitary Iphoned commute to get home. Under these circumstances - where we are more likely to live alone than ever before, organised sport may in fact be one of the last refuges of community in Australian society.

Now hold on - you’re thinking: 'what about the destructive front page rock star drug habits of professional football players?' What of the corporate machine that now ruthlessly markets sport ? And even the shameless genital exposure that seems a regular post match weekend event ? While all BBQ stoppers, they are far removed from the more 'middle of the road' Saturday afternoon reality for the suburbanites of the quarter acre block, where every weekend, people pull on a jersey, or guernsey, or goal attack bib together, whether slipping into full forward or goal defence. Think of another time when we work so tirelessly together, in unison, in an egalitarian way ? (And devote weeknights to it together so we get better at it as a team). Pretty much, we start participating as soon as we enter the school system too, whether we make the team or just have a kick around at play lunch, and the shared centrality of the clubrooms in our weekly ritual even offers a forum for community education.

In other aspects of our life, like the world of work, things have changed for most of us. Gone are the road crews and production lines that required us to work together as a team - with the need to get along over the long term in our “job for life”. "In" are the workstations where we work alone at our PC in a 9 to 5 world populated by individual performance assessments, individual work contracts - even eating lunch at our desk on our own…….

In parenting it is now rare to pass a crying infant around extended kin - who in the past all probably conveniently cohabitated under the same roof.  Instead we tough out the sleepless nights and greet the dawn on our own. To unwind, we retreat, alone, into the online world of the first-person shooter, PSP and online poker...  And yes - I know social networking is a form of interaction between people - but the intermediary is a soulless liquid crystal monitor.

While different sports certainly have an obvious social class bias (compare the down to earth 'Marngrook-ness' of AFL to the private school elitism of rugby union), all still encourage a togetherness that's quite alien to other aspects of our social life now.   (nb: 'Marngrook' was the name for the indigenous Australian game which many believe to have been the inspiration for Australian Rules Football)

Who would have thought that a whole lot of guys sitting around in the nude, drinking stubbies together on a Saturday afternoon, could be a social movement ?

The other aspect of sport that reinforces the togetherness is the phenomenon of mass spectating that occurs in Australia. The MCG is one of the largest sporting arenas in the world (Old Trafford, Manchester United’s home ground, the crème de la crème of English Premier League, the biggest league in the most popular sport on the planet, only holds 75,000). So this is the other dynamic of sport as community, spectating or “barracking”. (What other language has the equivalent expression to Australian English’s “footy mate” ?) You only have to spend any time in a country town to see organised sport also operates in this way, where sporting fixtures offer those members of the community who don't participate directly, an opportunity to come together nonetheless, watch and socialise. And our glorious weather encourages both.

So cast your mind back to last October, when you were throwing another banger on the barbie last at a Grand Final party, or more recently watching the seeming (seaming ?) demise of the Australian national test team with mates, and take a moment to ponder that that might be your community.

Geoff Drechsler is a veteran Australian labour movement activist
Posted by Vaughann722 at 10:26 AM