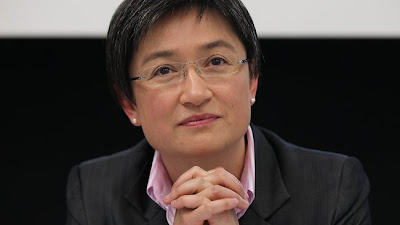 above:  As Finance Minister Penny Wong is well-placed to attempt to 'head off' any strategy of unnecessary austerity for Labor's May Federal Budget.  Penny, Please stand up for what it right!
Tristan Ewins
Dear Readers: I wrote the following after the government’s announcement that it was cutting back higher education funding in order to pay for a much-reduced version of the Gonski education reforms in the May Budget:


As to what is determining Labor’s behaviour – I think there was an element of cynical opportunism when it came to Sole Parents.  (playing on peoples’ prejudices – but ultimately causing more self-harm in the process – by losing credibility with parts of its base… )


But on Gonski I think it’s a bit more complex.  I think – as a friend of mine said a short way back – that Labor is ‘curling up into a ball’ in the face of attacks from powerful vested interests.  Hence the collapse on superannuation concessions – ie: tax shelters for the rich; on the Minerals Resource Rent Tax; and now the retreat on Gonski.


It seems they would rather compromise their core ‘signature’ policies then take on the powerful and wealthy vested interests…  And what they don’t seem to grasp is that this does not win respect over the long term.  It only makes our adversaries more confident, brazen and aggressive in their attacks on what remains of the welfare state, the tax-transfer system, the social wage….  IN short – If we never fight -  It means we almost completely lose control of the discourse over the long term.  We all but completely lose control over the definition of the prevailing ‘common sense’ on everything from tax to industrial relations, and social expenditures, infrastructure and welfare…  The Conservatives get their way no matter which party governs….  Failure to defend social justice, progressive taxation, the principle of redistribution  - will mean the self-liquidation of Australian social democracy unless someone else steps into the breach.  And the Greens could not achieve that on their own either.


But that said there IS progress for state education if Labor’s policies go through….  The means of paying for it are regressive; But it is still a more progressive overall outcome than what we already had…  Students – including students from low income backgrounds – will have to repay ‘start-up scholarships’.  This is bad.  Though it is mainly students from higher income backgrounds that will lose out from the decision to prevent them paying their HECS fees up-front.  And at least repayment will be deferred.   (the obvious question now being where the repayment threshold is set)


Regardless, though, it is a Positive-Sum Affair for disadvantaged students taken overall  – many of whom would never enjoy the opportunity of tertiary study were it not for this re-ordering of priorities.  Hence additional resources for indigenous, disabled, non-English speaking and poor-literacy students – and the ‘Lion’s Share’ going to state schools.


In short – this policy could also be crucial in stemming the drift of students to private schools to the point of ‘critical mass’ – where otherwise the state sector would become permanently second-class and residual.  The policy inflicts an injustice on tertiary students –but will provide opportunities for many who otherwise would never have a hope of a tertiary education; or even of making the most of Year 12.


The policy involves about half the resources that Labor originally promised, also.  Much is expected of the States given their finances.  The States should not be obstructionist – or blur the issues.  But while they are low on cash themselves – the logic of events could lead to user-pays infrastructure inflicted on us by the State Governments.  The states should promote the cause of federal tax reform to make all this unnecessary  – but it seems they are only interested in increasing the GST and removing exemptions for food  – as today’s conservatives  seem to ‘believe in principle’ in flat taxation that hits the poor hard.   Apparently this Ideology is not “class warfare” but anything else even mildly progressive is...


All this also begs the question what is going to happen to the National Disability Insurance Scheme (NDIS).  Tony Abbott says he supports it.  But Of course he will have no problem ‘neutralising’  the issue by paying for the program with savage austerity against the apparently ‘undeserving’ poor – for example the unemployed; and possibly against mentally ill recipients of Newstart deemed able to do ‘some’ work.  Where Labor would get the money from is anyone’s guess.  But with a price-tag in the vicinity of $15 billion/year to implement the policy I am afraid we are going to ‘squib’ the issue again by only half implementing the policy; and projecting full implementation into a distant future that may never come.


Labor would be more credible if they stood up on these signature policies even if it means abandoning the idea we can have a ‘Positive Sum Affair’ FOR EVERYONE.  Again this is the myth cultivated with the whole ‘social justice equals class warfare’ discourse. ( ie: that ‘the state should get out of the picture’)   This is sold as a liberal principle and ironically it exploits past Australian egalitarian traditions and self-image.  But in fact this discourse rests firmly on the interests of the wealthy; who seek to divide us all against each other on the basis of an economically Liberal Ideology, ‘downwards envy’ and other prejudices.


THAT outcome (ie: squibbing on NDIS) is what we need to agitate and mobilise against as the 2013 May Federal Budget approaches.  Without an assertive, confident and progressive Labor the task will become all the more difficult for the government, and  Labor will not be able to inspire activists, trade unionists, environmentalists into the kind of on-the-ground campaigning which alone can counter Abbott’s advantage of uncritical and biased monopoly mass media coverage . It could actually be a more difficult task, in fact, than had they stood up to the vested interests in the first place.


Finally: now that we have ‘squibbed’ on the issue of superannuation concessions even centre-left commentators like Tim Colebatch are arguing that significant austerity cannot be avoided.  But let’s be clear: Compared to other OECD countries we have small government in Australia.   By some estimates removing ‘middle class welfare’ could save a few  billion; but this pales in significance to the money that could be saved by winding back superannuation concessions for the top 5%-10% income demographic, and by reducing dividend imputation – just for a start.  Instead  of conceding the logic and the agenda of austerity rather Labor and the Left need to go on to the front foot and move towards an extension of social welfare for the most disadvantaged and the most vulnerable….  Aged Care is perhaps the most vital area where action is necessary – when one considers the regressive nature of existing user-pays mechanisms – and the sheer extremity of the human suffering by these amongst our most vulnerable citizens….


Tony Abbott apparently has a Democratic Labor Party background if you trace it back far enough…  And while the DLP and the NCC did untold damage to the ALP during the years of the split, you would at least expect from them a  ‘Catholic social welfare’ outlook with a measure of compassion for the poor.  Some have commented that towards the end of his life B.A Santamaria realised that in facilitating the neo-liberal hegemony the DLP did more damage to its cause then had ever been inflicted on them by the Left.   And now Abbott himself promises to be the bearer of previously unheard of austerity.


It is not only Labor that needs to search its conscience when it comes to the treatment of the vulnerable, including Sole Parent families.  Abbott could have used his leadership of the Liberal Party to lead it down the path of ‘compassionate conservatism’ after the fashion of the immediate-post-war German Christian Democrats.  Instead the disabled and the unemployed stand to suffer, and one can only speculate where else the axe may fall when it comes to further austerity in the Ideological pursuit of ever-smaller government.   The American-style rhetoric against practically any and all social investment is incessant – with no regard for the human consequences when the time comes to put this rhetoric into action…   The rights of the Aged don’t seem to be ‘factoring in’ with either of the major parties, and nor do we hear much from the Greens on that issue as well.


For both Abbott and Labor – Search your consciences when it comes to austerity and the rhetoric of  small government.  Neo-liberalism is not the proper ideology of Labor and social democracy, and nor is it the proper Ideology for compassionate Conservatism with a Christian ‘social welfare’ outlook.


For Labor’s part it is not too late for a mix of tax reform and reprioritisation of expenditure that avoids austerity against the vulnerable.   There is the potential mix of MRRT reform, reduction of dividend imputation, and winding back of ‘middle class welfare’ – that combined could bring in maybe $15 billion a year.  Reform of superannuation concessions has been ruled out for this year – but must factor into our plans for the future.


We have a choice.  Only a progressive ALP can inspire and mobilise its core base and potentially sympathetic social movements.  The May Budget is perhaps our last best chance to achieve this.