Rethinking Marx, the market and Hayek

In this article David McKnight takes another look at Eric Aarons's analysis of the work and belief systems of Karl Marx and Friedrich Hayek;  McKnight was a long-time member of the Communist Party of Australia; but more recently has promoted an agenda which - in is own words - attempts to venture 'Beyond Right and Left'.   This article will also be published at a dedicated website on 'Hayek versus Marx'; and an earlier review - written by the blog publisher Tristan Ewins - can also be found here: 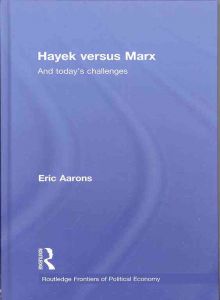