Media Diversification and the Question of ‘Neo-Racism’ 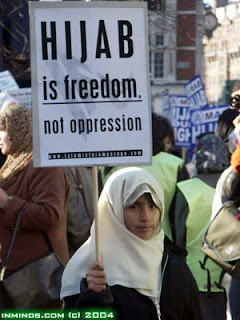 above:  The meaning of the Hijab is largely a matter of personal perspective
In this latest article, Tristan Ewins examines further the arguments around media diversity and the Media Inquiry in . But what is more, he engages with recent arguments made at ‘The Drum’ to the effect that there is a ‘new form of racism’: ‘neo-racism’.   Ewins disagrees with the Greens’ position on media reform – but we would definitely welcome sincere and respectful debate on all these issues here at the blog!!
nb also: If you find this article interesting PLS join our Facebook group - to link up with other readers, and to receive regular updates on new material.
see: http://www.facebook.com/group.php?gid=58243419565
Tristan Ewins


Aurelien Mondon makes some interesting points  in his recent article over at ABC’s ‘The Drum’ from .
In this article we will be considering the issues of ‘free speech’ and ‘neo-racism’ – both developed in Mondon’s piece..
To begin with a couple of select quotes, Mondon writes:
“What is interesting in today's so-called battle for freedom of speech is that it does not come from minorities who are oppressed. It comes from white (mostly male) 'radical' conservatives. The question is: why has the conservative right so suddenly decided to defend freedom of speech?”
And then with a heavy tone of irony:
“Of course, these writers and politicians would tell us, as Howard did, that it is because the left has imposed a political censorship and stifled debate. Indeed, everybody knows that the 70 per cent of the Australian media owned by Rupert Murdoch [Ed: in fact 70% of print media] has been unashamedly left-wing over the past decades, leaving little space to debate without an outright socialist bias.”
For the whole of Mondon’s article see here:
http://www.abc.net.au/unleashed/2906420.html?WT.mc_id=newsmail
Mondon is ‘spot on the money’ when he identifies the hypocrisy of so many on the Right – of effectively opposing media diversification, and so in effect opposing practical and meaningful pluralism – on the basis of ‘freedom of speech’.
Both Fairfax and NewsCorp are provoking unwarranted fear when it comes to the issue of censorship.  Overwhelmingly – from Labor – there is talk of diversification and stemming undue concentration of ownership.
There is also talk of protecting personal privacy.
But while some from the Greens had considered more thorough-going regulation of content, even including licensing for newspapers, Labor’s response has been far more cautious, and Labor is not likely to bow to Greens pressure on this issue.  See:  http://greens.org.au/content/greens-move-inquiry-media-ownership-and-regulation-australia
Indeed – it is difficult to understand how some of the proposals put forward by the Greens ‘gained traction’ within that party in the first place.  (Yes the Murdoch press has been conducting a blatant campaign against the Greens; but surely opposition to censorship is a ‘fundamental’…)  Given the party’s location on the relative Left, the threat censorship has historically posed to the Left itself, and the possibility therefore of setting a dangerous precedent, one would have expected a more cautious approach on the part of the Greens as well.
But as we have considered at ‘Left Focus’ before, freedom of speech is a complex issue.  In the context of a public sphere dominated by private wealth; where ‘cultural gate-keepers’ determine the bounds, terms and tenor of debate – ‘positive’ freedom of speech is limited.  By this we mean the capacity of diverse and otherwise marginal voices to be included authentically in the mainstream.
Indeed, in the public sphere is increasingly manipulated, insincere and exclusive .  The dominance of the monopolists and their billions in the Australian mass media makes this increasingly so.  And where public-owned media has in the past helped provide a counter-balance (eg: in the case of the ABC) conservatives have responded by enforcing their own notion of ‘balance’ - which in fact has undone the tendency towards meaningful and effective pluralism.
‘Freedom of speech’ as a ‘positive and enabling liberty’ ought to mean inclusive and participatory pluralism in the public sphere.  Only the worst of extremes should be marginalised – for instance, Holocaust denial and race hatred.  For some liberals, the Habermasian principle of the ‘Perfect Speech situation’ may serve as a guide.  (although conflicting values and interests cannot necessarily be resolved by rational exchange)
Where wealth inhibits this, it is the duty of governments to intervene: not to censor – but to provide the means and support for the development of that inclusive, diverse and participatory public sphere.  (including but not limited to online)
Tokenism or half-measures here are not sufficient.  We need an inclusive and participatory mainstream: and robust public support for diversification towards this end.  Ample public funds need be provided such that inclusive, democratic and participatory media challenge the existing mainstream meaningfully, comprehensively and deeply.
And again without censorship, principles of honourable journalism ought to be promoted.  Publications which maintain the pretence of presenting opinions, events and policy authentically and inclusively ought attract robust and high-profile public criticism where they fail to live up to their own self-proclaimed standards.
These issues need to be considered in depth in the coming media review; and Labor would be well-advised to implement a robust policy - not just half-measures.
Returning to the Aurelien Mondon article, however: Toward the end of his commentary Mondon develops a concept which he calls ‘neo-racism’.  This in of itself is a separate issue: but one no less worthy of criticism.
Specifically, Mondon argues:
“As opposed to crude biological racism, widely discarded after the Second World War and whose use remains political suicide, neo-racism is a lot harder to outright condemn, yet it is no less damaging to society, democracy and ... freedom of speech. Neo-racism does not rely on biological superiority or inferiority, or even any form of hierarchy. Instead, it states the incompatibility of cultures and the necessity to keep such cultures apart. Cultures are equal in their inability to cohabitate; therefore the neo-racist can even appear tolerant. Of course, the use of neo-racism, like the use of common racism, is always to the benefit of the powerful.”  http://www.abc.net.au/unleashed/2906420.html?WT.mc_id=newsmail
Even in today individual liberty is increasingly pressured by an assertive secularism.  Properly, the rights of both secularists and faith communities ought to be protected in the context of liberal and democratic pluralism. Attempts to ‘ban the hijab’, for instance, themselves set a dangerous precedent – and abrogate the liberal rights of minorities.  Some secularists may think of the hijab as a by-product of women’s oppression. But in a society where women are empowered to choose - not just legally but culturally - surely the right is that of the woman to decide for herself.
The same principle ought to apply to both socially conservative and liberal faith communities – which on the principle of voluntary and free association determine their own internal rules and doctrines.

But are all cultures compatible in all contexts and on any scale?; And should the contention they are not attract the tremendous stigma involved with the charge of ‘racism’?


Liberal democratic pluralism infers acceptance of difference: and of the right of individuals to move freely between voluntary associations.  But has political liberalism the potential to become so open as to leave exposed its own roots?
Even in socialist – where the principles of internationalism were openly and sincerely proclaimed for decades– ultimately there proceeded a degeneration into nationalist chauvinism, brutality, and the settling of historical vendettas.  Even with the passage of decades conciliation had not been achieved.  A more robust truth and reconciliation process over those decades may have been able to prevent this: but now we will never know.  The point is that we ought not deny and be closed-minded about the risks.
Like socialist internationalism, liberal democratic pluralism is not incapable of being eroded or even uprooted.  As socialists learned during the 1980s, history should not be seen inevitably as a ‘Forward March’.  Political ideologies are also cultures; and that includes the nationalist-chauvinist political cultures of the far-right, including the religious far-right.  Political Ideologies – including nationalist, ‘ethno-nationalist’  and religious varieties – as cultures – are not universally compatible: and to point to this is not to engage in racism.  In fact – to ignore these forces could be to court disaster.
And on a brief partial-tangent: integrationism should not be considered to be the same as assimilation either. Every society needs a social contract including minimum assumptions regarding human rights and the rights and duties of citizenship. (including personal liberty and at least a minimum of social solidarity) And this cannot work if not invigorated by communication and exchange made possible by common language and social engagement.
But yes: Mondon is correct to infer that these debates will be exploited by the powerful. During the 1980s the West supported the Mujahideen against the Soviets in for geo-strategic purposes: ostensibly against tyranny.  But today the West is again involved with a war in for geo-strategic purposes – legitimised by some as being for the sake of the rights of women.
And by the same token unfair and warped cultural prejudice can be deployed cynically to justify policies of colonialism and imperialism.  Perhaps this is the reality Mondon is alluding to; but nonetheless it does not follow that all cultures are compatible in all contexts.
Let us maintain the principles of liberal democratic pluralism, including a meaningfully participatory, inclusive and authentic public sphere.  But let us also be aware of the dangers. Liberal pluralism (and tolerant/harmonious multiculturalism) is not necessarily eternal and unassailable. The future depends upon the political and cultural choices we make now.
Tristan Ewins
This author has also considered issues of culture and nationalism in-depth before