SERVANT of the REVOLUTION 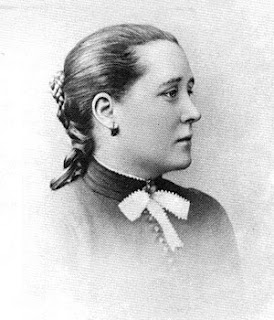 above: Helene Demuth - servant and lover of Karl Marx

A play exploring a rarely discussed side of Karl Marx premieres in Brunswick (Melbourne) 21 July. Servant of the Revolution takes the point of view of Helene Demuth (Lenchen), the Marx family’s servant and mother of his illegitimate son, Freddy.

Marx’s collaborator Frederick Engels took responsibility for paternity so the truth was hidden during Marx’s life and long after his death, known only among inner circles.

Controversy surrounds his relationship with Lenchen, who lived with Marx after his wife, Jenny, died and outlived Marx. The three were buried in the same plot. Interpretations are complicated by Lenchen’s closeness to his wife and her proximity to Marx from adolescence.

Lenchen entered Jenny’s mother’s household as a servant when she was about 10 years old and Jenny more or less inherited her. The only time the three separated was for a couple of years after Marx and Jenny first married.

Jenny’s biographer HF Peters refers to Lenchen as Marx’s ‘second wife’. While volumes have been written by and about Marx and Engels, and his wife left us a modest autobiography, little is known about Lenchen.

At home Marx was affectionately called Moor, after Shakespeare’s Othello. He was charismatic, dominating and his intellect attracted people. But friend Wilhelm Liebknecht wrote that Lenchen was the domestic dictator.

It is a tantalizing state of affairs, inviting a work of creative non-fiction. Servant of the Revolution is written by Anitra Nelson, author of Marx’s Concept of Money: the god of commodities (Routledge 1999), an academic and occasional short-film maker.

Director Brenda Addie breathes a postmodern absurdist tone into this nineteenth century tale by drawing out the commedia dell’arte that lies in the characters Nelson has chosen to tell the story. Marx does not strut the stage, rather Lenchen (played by Julianne Donovan) and Engels (Ray Tiernan) dominate while the appearance of Marx’s youngest daughter Tussy (Clara Pagone) offers a clear insight into the Marx family neuroses.

Servant of the Revolution is a rare theatrical exploration of socialist and feminist contradictions. See it — you might not view Marx the same way again.