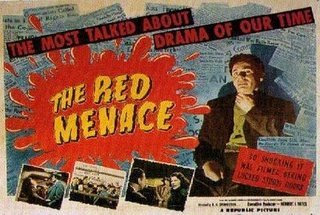 The red scare. Mere mention of the politically loaded phrase conjures up images of masses of people assembling with hyperbole pitchforks and parading “anti-American” individuals before a committee in the Senate or House of Representatives. Yet in fact, the term “Red Scare” historically can be ascribed to two different time periods in ’s history. The first lasting roughly from 1917 until 1920 and the second from the late 1940’s to the late 1950’s. The first red scare was a reaction to the overthrow of the Russian Czar and the Bolshevik Revolution that first brought Communism to power in . It was a movement felt throughout the Western World and led to a further chilling of relations between the Western democracies and , a relationship that before the revolution was shaky at best. The revolution effectively took out of WWI, forcing the power to sign a peace treaty with , and at its intellectual basis created a differing political movement that would run counter to the ideas of democratic capitalism in the west.

The second red scare is somewhat more documented. With such figures as Senator Joseph McCarthy and the blacklist, that created martyrs such as playwright Arthur Miller, it today serves as a warning of what hysteria can create in a country.
The term red scare in effect refers to the fear that many in the western world had in regards to communism, the term red pertaining to the red flag of the . Even though the red scare for most purposes ended by the late 1950’s it continued well into the 1960’s and in some ways to present day politics.
The conservative columnist Jonah Goldberg wrote a book in 2008 titled Liberal Fascism. The book mainly deals with criticizing then assumed nominee Hillary Clinton on her policies, but the main thesis of the book is that fascism is a word thrown about by the liberal movement in and that in fact fascism comes from liberalism. The book was controversial, as it was meant to be, and in retrospect seems outdated for its continuous assault on . Yet the spirit of the thesis, that a word is thrown about without knowledge of its meaning, is one that I would now like to borrow from Mr. Goldberg to suit my own purpose here in this column.
Socialism, and communism are words that today are bantered about by the right wing of the GOP with as little regard as to what it applies to much like Goldberg’s alleged liberal fascist labelers. Tune into FOX or listen to any die hard of the Republican Party and you will quickly “learn” that Obama is a socialist. Nancy Pelosi is a Socialist. The Democratic Party is a communist party…etc. In all honesty this has nothing to do with policies but instead it is a word that inspires fear therefore it is used as a label for political purposes.

Now the argument could be made that Obama is a socialist because he is using the government to help the financial and auto industries, and because he has approved a massive spending bill for the country. However if this is accurate then FDR was also a communist for it was he that used government intervention to help the country get out of economic turmoil, and the GOP has been trying nonstop for the past several years to make Iraq into a modern day socialist country with its continual use of government aid.
Right wing advocates of the past administration also should have a difficult time explaining their stance on such controversial issues as warrantless wiretapping, torture, and suspension of habeas corpus for certain individuals. Because the interesting thing about this new red scare by the conservatives is that they claim Obama’s policies will limit citizens liberties. It is ironic that the GOP advocated so heavily for a suspension of those liberties but now criticizes the Obama Administration for its policies because it “may” lead to the very thing they wanted. In other words conservatives are saying that if Obama gets his way and is allowed to attempt to assist the country by building up infrastructure, investing in green technology, and putting money in the American economy then the American people someday will wake up under that dreaded red Soviet flag. This is opposed to the GOP which for the past few years stated that one should skip all of that above mentioned spending on the country and go straight to the dreaded flag.
Unlike Goldberg’s false premise that fascism came from liberalism, this columnist does not claim that conservatism came from communism. Yet certain factions in the right wing movement advocate very bizarre notions when it comes to their brand of liberty. The notion that Bush was correct in his expansion of power while Obama is incorrect for using the government to stabilize the economy. That the Democrats are communist while holding the conviction that if one does not belong to their political party they are un-American. Perhaps it is like my grandmother told me years ago, that if someone hates something long enough and hard enough they will eventually become what they hated. It is for this reason that the GOP has morphed into something that only a few decades ago they would have detested. Red scares, based on fear, leads to hate dear reader. Hate has no power other than that to destroy.