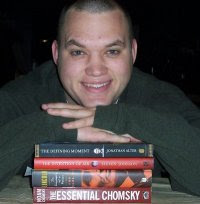 Below is a left-liberal critique from Wes Bishop on the theme of "reform versus revolution". Later tonight Lev Lafayette will be posting a radical/socialist response to that same theme. John Passant has also indicated an interest in replying by the end of the week. Please visit regularly to follow the debate... All readers on the broad left are welcome to contribute to the debate...

Recently Tristan e-mailed me with the request of taking part in a debate about the legitimacy of socialism and whether or not as a stated goal it should be achieved through the avenues of reform or the raging straits of revolution. Upon approaching the answering of this interrogative I came to several conclusions quite quickly, a process that is indispensable for a commentator. The first conclusion I drew was that I am not a socialist. Therefore, to answer the question of how best to achieve socialism is akin to asking the King of Saudi Arabia the best pathway to western style democracy. This first conclusion left me at somewhat of a loss of words, because how can an American capitalist be trusted with the answering of such a question?

As is typical with myself I put the dilemma on the backburner of my mind and let it ferment for a few days before returning. I was not disappointed. Returning to the question I remembered one of the wise lessons my former professor, Dr. Ralph Carbone, had taught me year ago. For two years I had the benefit of learning from this master of rhetoric (i.e. person who LOVED to argue). In his classes he had a fascinating way of educating people about an issue. Walking into the classroom he would announce loudly, “This side of the room your pro-[this], this side your pro-[that]!” It wouldn’t matter what subject, evolution, abortion, immigration, the nature of beauty, all of that was reduced to what side of the room you were sitting in at the time of his announcement. Quickly, people would scramble to get to the side of the room they most strongly agreed with and then the debate would be ready to begin. On several occasions I purposefully sat on the other side of the room, than that of the one I agreed with, because as I found out I could learn much more about an issue (and subsequently myself) by arguing a point I did not agree with. Time and again I would spend entire class sessions, passionately defending intelligent design (that was a treat) or the right of the state to regulate what women can do with their bodies. What astounded me the most was not the fact that I could effectively defend a view point I disagreed with but that movements and philosophies that I found and still find completely incompetent could have valid objections. This realization hit me full force when Dr. Carbone and I began going back and forth over the issue of evolution vs. intelligent design. Typically Dr. Carbone would raise a point, I would counter it, and then he would come back with another counterpoint that shut my argument down. Yet, on this occasion after Dr. Carbone had countered, I came back with another whole new point and effectively refuted his argument. Silence fell over the room as everyone turned to look at me, and Dr. Carbone contemplated for a moment, finally resorting to a fancy two step to avoid the point. I sat stunned with what I had just accomplished; I an upstart sophomore from south eastern Ohio had just shut down a fully fledged Ph.D.

The point of my inclusion of this trip down memory lane in this essay is this, although I do not agree with socialism attempting to argue its case (and how to achieve it in a society) taught me much about the movement and led me to an inevitable conclusion in answering the question, REFORM or REVOLUTION?

Put simply, revolution is not the answer, and reform is the path that should always be attempted, tirelessly and diligently. Now as an engaged reader the question naturally follows as to why this is the case? Why reform? Why not revolution? Is it not hypocritical for an American to condemn revolution, when the country all Americans belong too was born in the throes of revolt?

Again to answer it simply, no it is not hypocritical, and reform is the better path for many different reasons. First off it is not hypocritical because what the American founding fathers engaged in was a risky gambit that could have easily backfired and caused severe repercussions for generations and generations. Yet, the founding fathers were lucky, and more importantly pushed by the British to the point that revolution was the most viable solution for their people. In such a case revolution, unfortunately, was warranted, but as any quick survey of history will reveal, revolutions seldom end as well as America’s, with massive social upheavals and economic disparity being the norm instead of the exception.

Socialist that seek to enact their policies should remember this, as it is overly apparent in the western democracies that civic pathways are open to change. Granted this change can sometimes be frustratingly slow, but reform allows for something that revolution very seldom does. And that factor is the beneficial practice of clear reflection.

As the above story illustrates reflection allows for people to contemplate their situation, and their goals, learning about themselves and what they believe. Reform will allow for the enactors of policies to re-evaluate the course they have chosen, modifying it when necessary, and abandoning it when it is no longer fruitful. The members of my class that rushed quickly to their desired side of the classroom behaved much like revolutionaries. So sure where they of their paths that they felt that no further reflection was needed, no more contemplation warranted. A side was chosen, and that side was now to be defended until the end. Such is the case of revolution, for both parties involved.

For the actual merits of socialism, I will conclude with these parting thoughts-

Inside the United States today there is growing pressure to view our economic system (and the economic systems of the world) in a black and white fashion. This new dogma (or not so new dogma) reduces the world into the inaccurate description of pure capitalism, and pure socialism. In many ways this movement is a precursor to the revolutionary mentality, which pits one faction against another. Automatically, the culture of today is slapping labels on people and telling them, “Look, that person is the enemy, we need to oppose them.”

I speak on behalf of all common sense in when I put forth the following claim, economics should never be a battleground of ideology, or politics. It should always be an objective approach to what is best for the people of a nation. There will be differences in opinion. There always are, but pretending that the States are teetering on the edge of Socialistic revolution is the same as believing that the U.S. is going to become an Islamic theocracy. Thankfully, many in my country have heeded the lesson of reform and have followed it.

Unfortunately, there are the red herring trumpeters who say Obama will make us socialist, because of the recent response to the economic crisis. However, let one thing be clear, although there is a lot of resentment in the U.S. for “socialism” in the financial and auto industries it should be remembered that the free markets asked for this government assistance. Washington did not storm the lobbies of Detroit and Wall Street; the free market came to the halls of Capital Hill seeking government aid and intervention. Socialism has won an important victory through patient reform on this occurrence because it is vindicated in the conviction that markets are incapable of regulating themselves, and that governments have a fundamental right to protect their citizenry. This tip of the hat to socialism would render from my fellow capitalist a quick condemnation that includes some benign comparison to Stalin. To this I say the following, criticizing socialism because of Stalin is paramount to denouncing democracy because of Iraq.

I stand after all of this an even more radical moderate in my economic philosophy. Although a capitalist, I am quick to denounce the drastic ramblings of Ayn Rand and state that to the contrary of what Objectivist teach, mixed economies are a sign of a viable nation and responsible government.

I have reached these conclusions through reflection, which has been permitted because reform has ruled over revolution. If a young writer can benefit from this practice both now, and as a sophomore years ago, imagine what a world full of individuals could gain from the same feat.