Liberal compromise and the struggle for social justice 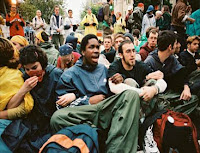 (Second in the Series)

As part of the struggle for ‘The Good Society', it is necessary to aim for the right economic, political and social mix.   In pursuit of this, one response is the pursuit of a “democratic mixed economy”: an economic template which pursues economic democracy, strategic planning and public ownership, and the harnessing of market forces.

The “Good Society”, however, is more than a question of how best to manage the economy. Underlining Australian democracy - and democracies the world over - is a presumed social contract of liberal democratic consensus.

The maintenance of social compromise, here, is critical. To begin with, such a compromise can provide the framework for cultural and political pluralism: essential for modern multicultural societies.

However, the rationale for social compromise goes deeper still:

All social actors have a shared interest in avoiding a “vacuum” which can be filled by a desperate and brutal struggle to re-impose a social order.

Such scenarios developed during the 1789-1799 Revolution in France, and also following the 1917 Russian Revolution. After the experience of the Jacobins in France, the desperate efforts of revolutionary governments to hold power has been termed as “Jacobinism”.

Whatever the ideals of the revolutionaries in such struggles, ordinary people in their hundreds of thousands perished in the Terror and the wars which ensued.

Of course, counter-revolutionary terror can be just as horrible, or worse, than revolutionary terror. But surely, if there is an alternative - and less brutal - road to change, then we should use it. So, in avoiding such terror, the social compromise of liberal democracy commands our attention and respect.

The composition of any “liberal democratic consensus” or “social compromise”, however, is strongly contested.

Without social rights and social democracy, such a consensus is simply not enough. The liberal democratic consensus underlining the United States, for instance, is not necessarily a comfort to its poor and vulnerable, including the unemployed, the exploited and the homeless.

And sometimes - such as with the outbreak of World War I in 1914 - the acquiescence of elected governments in the face of such barbarism and horror - shatters any illusion or semblance of legitimacy.

Ultimately, even where a democratic government carries a mandate, pursuit of justice demands that workers, citizens, minorities - engage in struggle for their liberal and social rights (and in the case of unjust wars - for diplomacy and peace).

Liberal democratic compromise might ensure the right of citizens and workers to mobilise and argue in the “public sphere”, and to exercise the right of universal suffrage.

But there are instances, also, when people need to push the limits of liberal democratic social compromise. Strategies of civil disobedience: rallies, occupations, political strike action, the holding of picket lines - can well be justified.

And while terror and brutalisation must be avoided, strategies of civil disobedience can lead to physical confrontation between ordinary people and the state power.

Such circumstances can comprise a delicate “balancing out”: one where physical confrontation and conflict is limited by mutual restraint. Failure to exercise restraint, though, can result in a crisis of legitimacy, descent into repression, and escalation.

Under circumstances of liberal democratic consensus, the state itself - to an extent - also comes to embody the social contradictions it is called upon to mediate.

Employees of the state involved in the provision of social services and welfare might develop an interest in the continuation or improvement of services in their field. Teachers, for instance, have not only been involved in struggles for wage justice: they have been at the heart of struggles for a more progressive curriculum.

And it is not unimaginable to suppose that some police - who themselves have experienced industrial struggles - might under some circumstances be reluctant to break the picket lines of other workers.

Furthermore, strategies of “dual power” may involve the creation of alternative democratic institutions - community media, mutual and building societies, non-exploitative co-operative enterprise - beyond the internal contradictions of the state power.

A more radical example might involve the establishment of “community development” or “citizens’ investment” funds from below - through industrial action.

“The Good Society”, here, is one which is open to change: through the dynamic of class struggle, as well as the struggles by minorities and interest groups for recognition, and socio-economic justice.

But such a society is also one whose liberal foundations allow for civil disobedience, while acting as a bulwark against the disintegration of social order, violent desperation: even terror.

In conclusion, “The Good Society” is one marked by a liberal and social democratic consensus. It is a society characterised by a “mixed democratic economy” whose aim it is to provide for the complex tapestry of human need.

So complex a tapestry refers to material, social and cultural need; and to spiritual and secular aspiration for hope, kindness, justice, love, peace and meaning. The “Good Society” aims for a market which is democratic, innovative, responsive, fair and participatory. Such a social project aims beyond the crude logic of share value maximisation.

The stability and endurance of liberal and social democratic consensus and compromise is also central to the pursuit of a good and just social order.

Here, the best defence for liberal, democratic and social rights is a culture of civic mobilisation and activism, and of critical inquiry.

“Civic mobilisation” also refers to the capacity of such organisations and movements to build counter-hegemonic strategies to challenge the social order, and - where appropriate - to take collective action - including civil disobedience.

Such a culture is best sustained through a robust and participatory “public sphere”: in participatory electronic media, journals and newspapers, public assemblies and social forums.

The foundations of “active/critical” citizenship, here, are best laid early: in the process of public education, and in the development of curricula and teaching strategies. The emphasis, here, ought be upon value formation, ideological literacy, civic mobilisation (including public sphere participation), and critical appreciation of issues through engagement in the Humanities and Social Sciences.

Hopefully this task of imagining of just what constitutes the “Good Society” might compromise a starting point for real efforts to improve the world.

After all, the “point” is not just to talk about the world - but to change it.