Naive Impressions from a brief visit to Havana - by Nick Shimmin 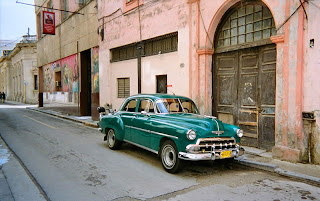 above: an image from contemporary Cuba
Nick Shimmin gives a first-hand account of life in Cuba today
All travellers know the frisson of arrival in a mysteriously alien place and the seeking of famous images which one has heard about. The train to Tibet hauls itself on to the plateau and leans to one side as all the passengers rush to windows to exclaim at the tiny black dots in the distance which are the first glimpse of the iconic yaks. In Cuba, there are so many iconic images that the taxi ride from the airport demands eyes in the back of one’s head. The huge 1950s cars are everywhere, the propaganda billboards flash by. One of the reasons for our ongoing awareness of these icons here is that they’ve been unchanged for so long. A look at the opening sequence of Carol Reed’s OUR MAN IN HAVANA, from 1959, makes the recently departed visitor to Havana think the film was shot last week, so little has changed in the streets of the capital.

But first things first. One of the great amusements on arrival in Havana is seeing the battalion of petite green-clad customs officers emerging to occupy the immigration booths when an international flight arrives. This produces a happy flow-through of passengers in complete contrast to the kind of endless procedures now in place in US airports, for instance. If the comparison seems gratuitous, it shouldn’t. The fact is that Cuba’s bureaucracy is heavily staffed but with an emphasis on genuinely providing services to people rather than looking after itself.

The drive into town leaves the visitor in no doubt about the decay of the infrastructure in Cuba, though. Clearly, decisions have had to be made here about priorities. Oppressive US sanctions have meant Cuba has needed to be very resourceful in finding economic support, and the collapse of the Soviet Union left it even more chronically under-resourced through the ‘90s. Though Chavez’s Venezuela is a substantial supporter now, there is no doubt this is a place in need of investment and economic reform.

Thus the necessity of Fidel ensuring a smooth succession, and the appointment of his brother Raul when his health started to fail. We are led to believe that Raul is starting to make these small adjustments to the Cuban economy - it’s hard to imagine the place embracing a fully-fledged “communist capitalism” such as exists now in China, but who knows. The transition appears to have been accomplished well, with the “Viva Fidel” graffiti around the city being supplemented with “Viva Fidel y Raul”. One thing Fidel wanted to avoid was a factional succession squabble which might allow a vacuum which could undermine the government.

Graffiti seems to represent the bulk of the Fidel propaganda on the streets and in the shops. Though Che is quite ubiquitous, it is significant how Castro seems to have largely avoided the cult of personality which has destroyed the credibility of many other autocrats (and threatens Hugo Chavez, for instance).

Though the state press is full of Fidel’s writing and interviews, it’s relatively sophisticated stuff not designed to generate mindless loyalty a la Obama pins and T-shirts. One comes away from the media in Cuba with the impression that Fidel really does want people to THINK about the issues, perhaps because he knows that this is crucial for the survival of the revolutionary government in the long run.

So when you exit through the gift shop at museums in Havana, there is a dearth of Fidel paraphernalia. But visiting these museums, a visitor can feel some puzzlement about the funding priorities for institutions in Havana. The undeniable impressiveness of the two art museums is in stark contrast to the modesty of the Museum of the Revolution, for instance. This doesn’t seem in keeping with a propaganda-obsessed authoritarianism. The latter museum, though, does sink into the absurdity of communist nonsense after the rousing revolutionary rooms on the top floor when it turns to post-1970 politics and paranoia. Dengue fever outbreaks on the island are, apparently, the work of CIA-supplied mosquito squadrons. Sillinesses such as these provide an undermining disservice to the inspiring pre-1960 stories of revolution, which are lent a homespun authenticity by the shabby displays and poor English translations.

What the Museum of the Revolution does most successfully, though, is give some sense of how the government in Cuba has had to adapt to a whole range of global transformations beyond its control, from the Cold War to the US embargo to the collapse of the Soviet Union and the rise of Bolivarian South America. Reflecting on this, it seems that Fidel and his ministers have been intelligent enough in finding ways around the difficulties these situations have created, but ultimately it is the material prosperity of your people which generates popular support and this is what probably poses the greatest threat to the revolutionary government.

There are of course large numbers of Cubans in Havana who have always despised this government, and that number is likely to grow as the generations who are too young to remember the reasons for the revolution become predominant and are more seduced by images of Pan-American prosperity.

But the fact remains that a million people turn up to hear Fidel not because they are compelled to do so, but because so many remember the reasons for the revolution and understand what the regime has done to create such things as a secure education and medical system, if not to alleviate poverty, in the face of oppressive sanctions imposed by the US.

It is likely that history will deem those sanctions to have backfired in two ways – firstly because the revolution was not communist to begin with (in fact Castro rejected communism, and the Communist Party in Cuba was one of the last groups supporting the old Batista government), but the US approach in the era of McCarthyism pushed Cuba towards Moscow as the best option for economic support, and secondly because the longer the sanctions remain in place now, the more likely it is that Cuban economic and cultural relations will be built with South America, Asia and Europe, and by the time the US comes to its senses Cuba will find little value there.

Of course one still hears so much about the repressive (some even say –preposterously - Stalinist) nature of the regime in the Western media, even though the CIA funding of misinformation campaigns about the place is public knowledge and ongoing. The CDR system (Committees for the Defence of the Revolution) is certainly supervisory of the individual’s behaviour, but as with most such networks it provides important social services, welfare and community support as well. Providing the latter while freeing itself of counter-revolutionary paranoia would certainly be a step forward.

But those in the West who condemn the CDR system conveniently forget the police state of the Batista regime overthrown by Castro, the McCarthyist repression consuming the US at the time(remember that in 1958 large numbers of US employees had to pass “loyalty reviews”!), and the extent of covert surveillance practiced in all Western democracies today. And one of the ironies of Cuba is that when one looks at the map of the island in the departure hall in Jose Marti Airport, one reflects on the fact that the only real gulag on the island is the American one in Guantanamo Bay.


About the Author:  Nick Shimmin was born in Liverpool UK, and moved with his family to Sydney in 1969. Educated at school and university in Sydney, he returned to England in 1985 to study for a doctorate in Manx Literature at the University of Lancaster, then returned to Sydney. Since that time he has worked in sales and marketing for Cambridge University Press in Sydney, and also as a subtitling editor for the television arm of the Special Broadcasting Service, where he met George Burchett, the son of the heroic radical Australian journalist Wilfred Burchett. Together they edited Memoirs of a Rebel Journalist: The Autobiography of Wilfred Burchett (2005), and Rebel Journalism: The Writings of Wilfred Burchett (2007).

NB: If you enjoyed this commentary PLS join our Facebook group - to link up with other readers, and to receive regular updates on new material.