A Chilean Miracle - but accompanied by Sober reflections 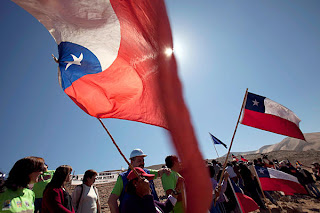 In this reflection, AMWU industrial officer Don Sutherland celebrates the rescue of 33 Chilean miners. But these sentiments are accompanied by a sober consideration of Chilean political history: of the rights of workers in Chile today, and of a Chilean government which he sees as the inheritors of Pinochet's terror, and callous disregard for workers and the poor.
Dear Friends,

Along with many others I wept with joy and admiration watching the remarkable rescue of the 33 Chilean miners.

Since the mid 70's I have been friends with a number of Chileans and their families who have lived in Australia since then. I met them because they were poltical refugees from the bloody military dictatorship of General Pinochet established by a military coup in September 1973. As political refugees they were organisers and supporters at the level of their unions and communities of the democratically elected government of President Salvador Allende. Thousands dead. Tens of thousands, even more, scarred physically and mentally.

I have talked with some of my Chilean friends and shared their joy and pride in this achievement. We remember how leaders and members of Chile's mining unions were among those arrested, tortured and executed by Pinochet's military and civilian thugs. The USA watched over and advised on the strategy for the coup, especially the then Secretary of State Henry Kissinger.

The fascist dictatorship of Chile provided it's people as the crucible for the first neo-liberal economic program ( followed soon after by Thatcher and Reagan) massive cuts to the social wage, extensive privatisations at basement prices to the big corporations, many of them from the USA). What we know now as neoliberalism could only have been born out of the barrel of a gun and beneath the scream of the jet bombers blasting the Allende government to death.

Our union - the AMWU - played a great role in the solidarity movement in support of the Chilean people, the refugees and for the restoration of democracy, including high risk deputations to political prisoners and industrial action in support. (I have more on this for anyone interested.)

The current President of Chile - the billionairre Senor Pinera - and his government is the far right inheritor of Pinochet's legacy. This should never be forgotten.

The accident that trapped the miners is not unusual in Chile and is the inevitable consequence of a ruthless economic system that has barely changed since the dictatorship of General Augusto Pinochet. Copper is Chile’s gold, and the frequency of mining disasters keeps pace with prices and profits. There are, on average, 39 fatal accidents every year in Chile’s privatised mines. The San Jose mine, where the men work, became so unsafe in 2007 it had to be closed - but not for long. On July 30 last, a labour department report warned again of “serious safety deficiencies”, but the minister took no action. Six days later, the men were entombed.

For us, the equivalent of watching Pinera and his Mining Minister greeting each rescued worker would be like watching John Howard, Peter Reith, Peter Costello and Tony Abbott doing so. It would make me sick to see it. And you also? 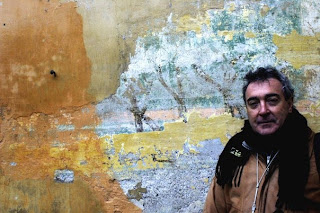