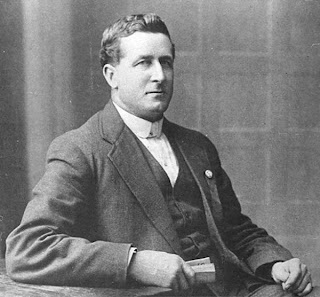 What follows is a review of a book concerning Percy Brookfield; an early Australian socialist MP who fought against war and conscription; the review is by Chris White, a veteran labour movement activist and Labor Party member.

'The Best Hated Man in Australia - The Life and Death of Percy Brookfield 1875 - 1921 ';  a book by Paul Robert Adams
Book review by Chris White
During our tweedledum-dee election I read the biography of Percy Brookfield - a conviction left labour politician.
Historian Dr Paul Robert Adams takes us through Brookfield’s exciting story – the events when a radical unionist becomes a politician and keeps and fights for left principles, ’the greatest champion that the people ever had.’
Nobody elected into the NSW Parliament today is like ‘Jack’ Brookfield MP from Broken Hill. At his funeral 15,000 marched and sang ‘The Red Flag’.
Brookfield’s militant stand and his unrelenting political radicalism is revealing and refreshing.
He was notorious for his combatative criticisms of ruling class employers and politicians. Today’s unionists and ALP MPs are just far too timid.
The media and right-wing politicians attacked him for his stances, such as, ‘not to fight for the British flag as long as they were making profits out of the war’.
He was hailed as the most extreme anti-politician ever to be elected.
He delivered reforms for workers. He became politically more popular nationally with radical speeches at mass meetings.
Adams takes us through Brookfield's story starting as a key organiser in the great strikes on working conditions and shorter hours for underground mining in Broken Hill. ‘If you want the 44 hour week, TAKE IT.’
Adams recounts Brookfield’s struggles to prevent ill-health in the mines and then for compensation for the industrial diseases. In Parliament Brookfield campaigned tirelessly winning Occupational Health and Safety and Workers Compensation reforms.
Before, during WW1 and the years that followed saw radical labour movement battles and unprecedented political turmoil.
Brookfield supported the 1917 NSW General Strike. We are taken through the 1919 Great Miners Strike/Lockout.
Brookfield was a supporter of the OBU, One Big Union.
He on principle campaigned successfully over many years to free the ‘IWW Twelve’ from their trumped up police convictions to burn down Sydney. He supported many left activists persecuted by the government’s ‘anti-terrorist’ laws of those days.
Governments prosecuted him. He was jailed for his principled anti-war speeches against the viper - PM Hughes.
His powerful leadership against conscription contributed to the success of the NO referendums.
A socialist not a communist, he learnt about and supported the new Bolshevik revolution and their supporters.
He always spoke the truth as he saw it. ‘Ironically, while he was an extremist, he was able to put his opinions in a way that drew people to him rather than driving them away.’
Adams recounts the left labour movement struggles with the colorful leaders like Brookfield and their battles with right-wing enemies, the NSW ALP. In Parliament Brookfield was tenacious and outspoken for his left causes.
Brookfield later joined the split from the NSW Right ALP to form the Industrial Socialist Labor Party and was re-elected and held the balance of power in the NSW hung parliament.
The reader knows in advance that Brookfield was then fatally shot at Riverton in South Australia.
Was his shooting an assassination? Adams takes us through the events.
Although these are different times, our unstable capitalist contradictions and the environmental crisis invite militant left convictions and organising. Left activists struggling against powerful corporations, right-wing forces and their political representatives are invigorated by this history.
I agree with Humphrey McQueen’s comments and other reviews.
‘In life, as in the manner of death, Brookfield made personal sacrifice the measure of his political commitment. Morally and physically fearless, his probity withstood parliament. Paul Adams has given us a biography as thoroughly gripping as it is thoroughly researched. Inspiration floods from its pages’.
From Frank Bongiorno
‘Both the radical life and untimely death of Percy Brookfield are the stuff of Australian labour legend. Finally, we have a biography that, while stating the case for Brookfield, richly contextualises and analyses his brief but turbulent career in trade unionism and radical politics. In this fine book, Paul Robert Adams has created a vivid portrait of a militant working-class leader who inspired both great hatred and deep affection. The author creates a richly detailed portrait of an extraordinary place, the great mining town of Broken Hill, during extraordinary times, the First World War, the gravest crisis the world had ever known’.
From Erik Eklund
‘It is an extraordinary oversight that this man, with such a crucial role in state, labour and local politics, should have been overlooked for so long’.
From David Day
‘This is a book that should be read by all Australians interested in their nation’s history’.
Please inform bookshops and libraries and union resources.
Dr Paul Robert Adams was born in Broken Hill. He holds a PhD from The University of Sydney and currently teaches media at The University of New England. (Puncher & Wattmann 2010)
http://www.puncherandwattmann.com/
Chris White, former union leader, posts on his blog
http://chriswhiteonline.org/
NB: If you enjoyed this commentary PLS join our Facebook group - to link up with other readers, and to receive regular updates on new material.