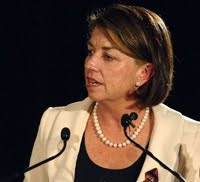 Anna Bligh and Andrew Fraser have a Plan for .  Unfortunately, it is the wrong plan.  And it has not been subject to the critical examination that it deserves.

The Renewing : Future Investment Plan was announced by the State Government on the 2nd of June in what can be described as a ‘take it or leave it’ announcement.  The plan seeks to sell off Qld Motorways, the , Forestry Plantations Qld, QR’s coal business and the Abbot Point coal terminal.

As recent public meetings and rallies throughout have shown, many members of the community (indeed polls indicate a clear majority) have serious concerns about the impact of privatization.

A throw back to the 1980s and 1990s, the community knows privatisation always ends up in poorer quality services, higher prices and job cuts.  The only real winners are the select few from the finance and consultancy community.

When Premier Anna Bligh announced her plan, she highlighted the so-called ‘success’ of QANTAS being privatised.  Funny how she didn’t mention the post-privatisation performances of Telstra, the Commonwealth Bank and interstate public transport and electricity systems.

It is easy to get trapped, when debating privatisation, and focus on ideological grounds.  The public sector is good, the private sector is better etc.

It’s time to move on from that.  The Government’s plan needs to be viewed through rigorous economic and public policy grounds.  And on this it comes up a lemon.

Consider this: the Government’s main argument is that we are in a ‘global recession’ which has wiped $14 billion off budget forward revenues and made lose its Triple A credit rating.  $12 billion is needed in future capital investment in the entities they have earmarked for sale.  By selling them, we save this $12 billion, and realize $15 billion in sales revenue.

Let’s put these claims under the microscope.

Blaming the global financial crisis (GFC) for our current predicament is a myth.  is NOT in a recession (ask Kevin Rudd).  The prime cause of ’s  financial problems is poor budgetary management going back to the start of the Beattie Government and even before.  rigidly stuck to the ‘low tax state’ dogma and did not plan for spending on much needed services and infrastructure for a growing population.

The past decade saw ‘rivers of gold’ flow into State coffers from the resources boom, the property boom and the GST boom.  And yet we have nothing to show for it.  The Government has done the financial equivalent of ‘pissing it up against the wall’.

“Don’t blame Wall Street for this.   This mistake is home grown….. (Qld) didn’t bank the windfalls, so they could spend in bad times such as those we are going through now.  They used the proceeds instead to cut taxes elsewhere.  In effect, they took a temporary revenue surge and returned it as a permanent tax cut.   By not imagining the day when the property market might go bust, Fraser has condemned his taxpayers to more pain than necessary in a downturn.”

If you look at the 12 Beattie-Bligh budgets, 5 have been in deficit.  And 2 of the 7 surpluses have been extremely ‘skinny’ to say the least (i.e. below $40m).  Long before the GFC came along, the signs were there the budget was skating on thin ice.

And what about the so called ‘facts’ the Government is giving us, based on Treasury advice?  That they will realize $15 billion from asset sales, helping cater for a $14 billion hole in State Government revenue over the next 4 years, and saving the Government from $12 billion in future capital expenditure.  Where’s the supporting evidence and information for such claims?  What modeling was used to come to these conclusions? What methodology and assumptions underpinned such modeling? Will such information be made public and transparent?

I challenge Treasurer Andrew Fraser to make all supporting information and calculations - justifying privatization - available for independent verification, ideally with Auditor-General Glen Poole who has done an excellent job recently highlighting flaws in the Bligh Government’s health and transport policies.

Queensland Treasury has got every one of their surplus/deficit forecasts for the past 12 budgets completely wrong.  For 2008-09 they predicted a surplus of $809 million.  We got a deficit of $574 million.  Their track record doesn’t inspire much confidence in me at all.

And in terms of saving $12 billion in future capital expenditure needed for the entities concerned, let me get this straight:  The Government is saying that the private sector, in the middle of the gravest economic crisis since the Great Depression, will readily cough up this money?  You’ve got to be kidding!

And let’s not forget the information Andrew Fraser let slip recently.  That of the $15 billion in expected revenue from asset sales, $13.5 billion will go towards debt repayments.  That means it is really only $1.5 billion taxpayers look at getting for selling off some key assets.

I acknowledge is experiencing financial difficulties but let’s address the structural state budget problem which is the real cause here.  It’s not the fault of our public assets which, in total, return some $500 million to State coffers each year and which carry out important services the private sector would not otherwise do.

To borrow a phrase Bligh, Fraser and co might understand, their economic plan is wacky, kooky and full of holes.  It needs urgent reconsideration.

, widely viewed as a ‘basket case’ economy, still has its triple A credit rating – and it hasn’t privatized!

When Joh Bjelke Petersen was Premier, a popular bumper sticker at the time was “See Queensland First before Joh sells it”.

Anna Bligh faces being featured in a similar bumper sticker in future.

nb:  If you enjoyed this article pls join our Facebook group - to link up with other readers, and to receive regular updates on new material.