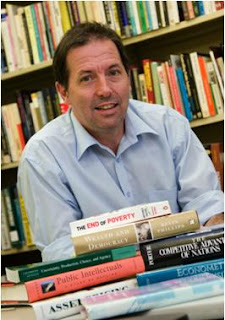 Bad arguments can be used to defend good ideas. But when the arguments used to defend a policy proposal are invariably spurious, it’s hard to avoid the conclusion that the policy itself cannot be defended on its merits.

The policy of privatisation, popular with governments around the world since the 1980s, is a perfect example. Time after time, governments have sold privatisation to the public as a way of freeing capital that can be invested in social infrastructure such as schools and hospitals. And time after time, economists have pointed out that such claims are fallacious.

Just this week I (like every other Queensland householder) received a taxpayer funded pamphlet advocating the sale of public assets, stating that ‘Keeping these businesses would cost the Government $12 billion over the next five years. That’s $12 billion spent on new coal trains and new wharves that can«t be spent on roads, schools or hospitals.”

The pamphlet is entitled “The Myths vs the Facts”, but appears to have its labelling wrong. There can be few myths that have been refuted more often than the idea that privatisation creates a ‘war chest’ from which new social infrastructure can be financed.

Coal industry assets generate income. Selling income generating investments and using the proceeds to fund investments that return no additional revenue leaves the government with no flow of income to service the associated debt. The necessary income must be raised by increasing taxes or cutting expenditure.

Economists have been making this point for decades. In 2002, NSW and Victorian Treasury Secretaries, John Pearce and Ian Little observed that Public-Private Partnerships ‘do not provide governments with an additional bucket of money for use on infrastructure projects‘. The validity of the point is unchanged if PPPs are replaced by asset sales.

Selling public assets will improve the net fiscal position of the public sector only if the price realised for the assets exceeds the value of the income stream that is foregone through publication. Is this the case with the Queensland asset sales. “The Myths vs the Facts” says it is, claiming that ‘The total return from all five businesses in 2008-09 was approximately $320 million … When the sale process is completed, it is anticipated the Government will save $1.8 billion every year in interest payments’.

That looks convincing, but it is an apples-and-oranges comparison that would never be allowed in a corporate prospectus. The $320 million figure appears to consist solely of dividend payouts, excluding retained earnings, tax-equivalent payments and the interest paid by the government business enterprises to service their debts.

The $1.8 billion, though unexplained, appears to represent the interest that would be saved, at a rate of about 6 per cent, if the state realised $15 billion from the asset sale and avoided $12 billion in new investment.

This calculation entirely is invalid. New investments in coal infrastructure can be justified only if the regulators are willing to approve additional revenue sufficient to cover the cost of capital. This revenue will cover the interest needed to service the additional debt, so forgoing the investment will not save the government money.

It is true that selling assets is likely to improve Queensland’s credit rating, which was reduced from AAA to AA+ earlier in the year, and thereby knock around 30 basis points of the interest rate on state debt. That will save the state about $65 million a year. It’s not a trivial sum, but it would not justify a sale except at a price high enough to compensate for foregone earnings.

AAA ratings are not necessarily indicators of good economic management. Leaving aside the failures, and anti-government biases of the ratings agencies, their job is to advise bondholders. Asset sales will always reduce debt equity ratios and reduce the risk faced by bondholders, whether or not they are economically sound.

With the spectacular failure of the efficient financial markets hypothesis over the last two years, it is no longer possible to put any faith in general claims about the superiority of the private sector. In a mixed economy, it is necessary to assess the merits of private and public ownership on a case-by-case basis.
Perhaps there are better arguments for these privatisations than those that have been presented so far. If so, the Bligh government should put them forward, instead of relying on long-refuted myths.


nb: If you enjoyed this article pls join our Facebook group - to link up with other readers, and to receive regular updates on new material.

ALSO – If you’re interested in becoming involved in the anti-privatisation campaign visit the URLs below for information: