Responding to the Legacy of George Orwell 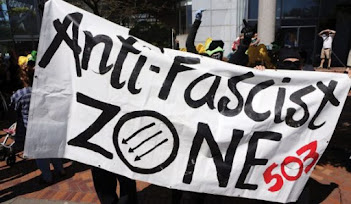 When Rightists use Orwell to discredit Socialism and Antifa they often neglect that he was a socialist himself.   And his critique of Totalitarianism is broader than a critique of Stalinism.

Just today I was a participant in a debate on George Orwell. One person argued that Orwell was opposed to Left Authoritarianism, and as a consequence would be opposed to ‘Antifa.’  (For those who don’t know, ‘Antifa’ is a broad anti-fascist popular front, often led by anarchists)  Another person responded by saying Orwell was really a social democrat, and spent his life fighting fascism.  Orwell is used to discredit the Antifa cause – in a process that is, well, ‘Orwellian’.

Both people were right in their own way ; but despite the problems with Leninism it is best not to get it entirely mixed up with Stalinism. (though they are historically linked)   Orwell himself was a socialist, and fought in Spain against Franco.  (with the POUM – which translates as ‘Workers Party of Marxist Unification’)   The legacy of George Orwell is too important to reduce it to a critique of ‘socialist totalitarianism’.  Yes, there is an anti-Stalinist aspect to ‘Animal Farm’ and ‘1984’.  But Orwell’s opposition to ‘totalitarianism’ is deeper than this ; and capitalism is increasingly portrayed as an ‘absolute’: ‘total capitalism’.

Tactically and in principle it’s also dangerous to avoid the use of the word ‘socialism’ by arguing for ‘social democracy’ instead.  By using both terms together we get a better sense that ‘socialism’ and ‘social democracy’ once meant the same thing.   (and perhaps could again)  ‘Social Democracy’ is more complex than just ‘the post-war mixed economy, Keynesianism and welfare state’.   And the original social democratic (socialist) tradition deserves to be rescued, despite Rosa Luxemburg’s insistence it had become a “rotting corpse” on account of its response to World War One.

In truth, most of global social democracy did capitulate on the issue of the War ; and this was the flashpoint which saw the rise of Leninism and its opposition to the rest of the Left.  (importantly, Luxemburg herself was what we may call a ‘libertarian socialist’ and was critical of Leninism’s practice of ‘democratic centralism’ following the revolution as well)  Here we have to distinguish, also, between ‘democratic centralism’ as a mode of organisation prior to 1917 on the one hand, and what it mutated into later under Lenin ; and worse so under Stalin.  But figures like Julius Martov and Karl Kaustsky resonated with their criticisms of Bolshevism, also, and in so doing left a legacy for radical social democracy. (socialism)  The Austro-Marxists and their so-called ‘Two and a Half international’ also stand as a reminder that there were alternatives between Leninism and Right Social Democracy.  For many years ‘Red Vienna’ was considered a model of radical (socialist) social democracy. It also involved a ‘workers army’ (Schutzbund) which was meant to be a ‘final defence’ for ‘the democratic path’)   Ironically,  it succumbed to an indigenous ‘clerical fascism’ itself because it could not decide how to fight ; or when.  But Austria’s levels of high quality public housing are an enduring legacy as well.

When people criticise Leninism they often neglect that Leninism originally still allowed for mass participation in the Vanguard Party. (ie: a party of professional revolutionaries whose job it is to lead the revolutionary working class ; often under conditions of capitalist state repression)   This goes to the question of whether a ‘one party state’ can be truly democratic. The answer depends on freedom of participation and organisation, and the absence of internal Terror) Stalin went one step further than Lenin and imposed Terror WITHIN the Party and the whole of society. Up until after the Revolution Leninism allowed for factions as well.

Terror is undesirable anyway, and tends to expand as centralism increases beyond a certain point.  Thus far, Rosa Luxemburg is correct in her critique of Leninism. The problem is that war and foreign intervention left limited choices ; and this helped lead to tragedy.

So it depends what you mean by Leninism. There's democratic centralism and the Vanguard Party. Following the Menshevist/Bolshevist split of 1903 (see: 'What is to be Done?' - it is the definitive text on Bolshevist organisation ; written in 1901, published in 1902) And then there's certain policies which followed: Terror (first outside of, then inside of the Party as well – increasingly pervasive and indiscriminate), labour militarisation, banning of factions and of other socialist parties, and so on. The point is that Stalinism took all this to a different level ; and democratic centralism was originally predicated on freedom WITHIN the party (but discipline in between Conferences ; partly as a defence against state repression).

That said, there was a logic to Leninism, which in the context of Entente and other foreign intervention, civil war, the threat of starvation and of people freezing to death – helped lead eventually to Stalinism.  More and more extreme measures were taken (largely defensively) ; and led to permanent repression.

In contrast, though, I don't believe in Leninist centralism. One reason is that in certain contexts it means the suppression of debate between Conferences. I also believe it's inevitable factions will organise ; and suppressing factions just favours the ruling stratum. Finally, I share Rosa Luxemburg’s love of freedom, and recognise that while Leninism and then Stalinism resulted in certain ‘victories’, over the long term these resulted in an object lesson which was used to discredit the Left, and justify policies like McCarthyism. (anti-socialist hysteria and repression)

The problem is: What was the 'way out' in Russia at the time? A purely liberal response may have ended in White victory, a continuation of the slaughter of World War One, and Tsarist Restoration. Also remember that the Bolsheviks were the only Party willing to pull out of World War One pretty much unconditionally.  Maybe the solution was ‘dual power’ – with co-existence of Soviets, the Constituent Assembly and the Red Army.

Leninism - warts and all - has problems ; but remember the context of World War One, threatened starvation and social collapse as well. And the liberal parties wanted to continue that war.  Even the Left Social Revolutionaries took this approach - resulting in an assassination attempt on Lenin.

Remember that the French Revolution was bloody as well ; but the tactics of the Jacobins didn't forever discredit democracy or liberalism. By contrast we are constantly told that Leninism and Stalinism have forever discredited socialism.

Better to avoid the dilemmas the Bolsheviks faced in the first place - because it was bound to end tragically. But appreciate the moral complexity. The Russian Revolution came on the tail end of a War that killed over 20 million people. Some of the same people who are critical on Leninism will try and justify the First World War. And ignore the long list of Western Cold War atrocities. (for example, the brutal mass murder of half a million communists and labour movement activists in 1960s Indonesia)

Importantly: liberal democracy ultimately triumphed. But only because it was able to ‘tame’ and internalise the broad left within a practical capitalist consensus.  And eventually a virtual neo-liberal success.  Still: “liberal democracy” is worth defending as opposed to the alternative of Stalinism or a Corporatist State. (ie: fascism)  Now that it lacks opponents on the Left, we see liberal democracy attracting critics on the Right.   (so much for ‘The End of History – a term coined by the liberal Hegelian, Francis Fukuyama after the collapse of the Soviet Union) Here it is well to defend Liberal Democracy . At least it retains freedoms which make liberation imaginable ; and even its limited freedoms are preferable to the Rightist alternative)

Libertarianism of both the Right and the Left when authentically expressed are not as bad as fascism.  A true libertarian would defend the rights of unions and their workers to withdraw labour. And would treat free speech as a universal.  A fascist would work through a corporatist nationalist state that suppressed opposition violently, and promoted a literally illiberal Ideology.  By ‘corporatism’ we mean the forcible union of capital and labour under authoritarian nationalism.  A true Left libertarian would be sympathetic to the cause of ‘Antifa.’  A right-libertarian would accept their right to participate and exist. Personally, I consider myself a socialist liberal. That said, all organisations can be penetrated by agent provocateurs.  And ‘ultra-leftism’ is often mistaken.

Remember, also, Marx said of the bourgeoisie that it would 'snort' at its republic "Better end with Terror than Terror without End". (written in 1852, largely in response to the context of the 1848 Revolutions)  Trump understands this and seeks a predicate for repression based on 'law and order'. Agent provocateurs understand this also and act accordingly.  (‘End with Terror’ itself can also lead to ‘Terror without End’ under Fascism ; and Hitler came close to winning the Second World War at several points)

The Left needs to respond strategically.  We should not disavow militancy generally ; and practically disarm ourselves.  But neither should we support every act of militancy when this will result in our isolation.  There is a dilemma.  Rosa Luxemburg talked of “spontaneity of the masses” : a ‘dialectic’ between revolutionary working class self-initiative and the leadership of a revolutionary party.  In a way she is right.  On the other hand, unrestrained rebellion can work as a pretext for State Terror. Think of the rise of Mussolini and fascism in the 1920s in Italy following a period of revolutionary upsurge.

Also, under Stalinism Western Communist Parties were often restrained to further Soviet Foreign policy.  Dulling ‘the class struggle’.  But sometimes there is wisdom in restraint.

There is also wisdom in taking the initiative at the right time ; including militant strategies.  The Left needs to be nuanced enough to know the difference.

This article was originally published at ‘The Australian Independent Media Network’