Socialism as Regulation: Is it Enough? A Response to Adam Ford 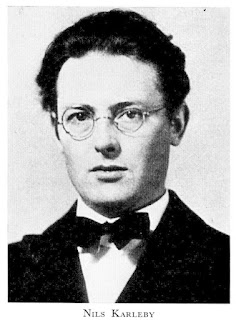 Above: An image of Nils Karleby:  Adam Ford's account of 'Socialism as Regulation' has some things in common with the thinking of this important Swedish Social Democrat


Dr Tristan Ewins
Veteran Australian Labor Party activist and blogger Adam Ford has put forward a critique of socialist metanarratives insofar as they retain a commitment to what I would personally define as a ‘democratic mixed economy’.  Specifically, by this I infer a mixed economy including a very robust public sector, but also a broader ‘democratic sector’ including various co-operative models, as well as co-determination, democratic collective capital mobilisation and so on.   Partly in response to my own consideration of the substance of modern socialism, instead Adam Ford proposes a reformed socialist project; one which breaks away from prior emphases on Marx, and prior emphases on public ownership.  Ford reserves the right to define socialism however he chooses, and not necessarily follow in the footsteps of Marx, or anyone else really.  Though in a Bernsteinian fashion (ie: after Eduard Bernstein)  he argues that socialism is a premise from which we depart rather than an ‘end destination’.

Specifically at his blog 'The Bloodied Wombat' he argues:


“The light on the hill is as a beacon, not a point of arrival. It guides us forward, rather than telling us where to stop.”


So in its emerging incarnation Adam sees the concrete form of modern socialism as comprising the quite vigorous and indeed aggressive regulation of capitalism.   Though he is not very specific in detailing what form this regulation would take.  Nonetheless, perhaps he has something in common with the Swedish theorist Nils Karleby  - who saw regulation like a peeling away of an onion – where the prerogatives of capital were progressively removed ‘until nothing is left’.  For example: I would speculate that this could take the form of legislated provisions for co-determination, or industrial rights including minimum wages and conditions. (though to be honest this is against the grain of so-called ‘reform of the labour market’ under successive governments, Labor and Liberal)   Karleby was critical of narrow interpretations of socialism which focused only on nationalisation.


For Adam Ford ‘socialist outcomes’ do not adhere to “pre-determined” and “known” “socialist structures”.  And rather than comprising an enduring beacon for socialists, the figure of Karl Marx is seen as imposing a “straight-jacket” on socialist thought.

Finally, Adam Ford condemns not only ‘command economies’ as ‘stupid’; but he applies the same judgement to mixed economies where the public sector extends beyond “natural public monopolies”, and certain essential services and infrastructure which the market would not provide via its own devices.


What follows is a response to Adam Ford’s arguments.

The hinting of a Bernsteinian angle is appreciated.  Bernstein had a lot of relevant things to say about socialism and ethics, socialism and liberalism, and the notion there no absolutely-final ‘end point’ for socialism.

Though Bernstein had also insisted of Marx’s theory:


Ford is right to suggest that in Marxism we do not have the meaning of ‘life, the universe and everything’.  Ethics, for instance, was a blind spot for Marx and many who followed in his tradition and in his name.  As was the tendency of Marxists – not least of all Lenin – to pose socialism and liberalism practically as polar opposites.  (Whereas for Bernstein socialism comprised ‘liberalism’s spiritual successor’)
Certainly it is fashionable in this day and age to decry the ‘old’ socialism. The neo-liberal Ideology remains largely hegemonic throughout much of the world.  Public ownership is seen as an anachronism.  ‘The market’ is revered; ‘command economies’ are reviled.  And indeed – even for those proposing a democratic mixed economy, the spectre of the ‘command economy’ hangs over all debate as if there really is no ‘middle path’ or otherwise diverging paths from those of neo-liberalism and so-called ‘state socialism’.  Though to be fair to Adam Ford he personally diverges significantly from neo-liberalism in proposing a thorough regime of regulation.  And his allowance for natural public monopoly puts him at odds with the likes of Mises or Hayek.


As already observed: Nils Karleby shared similar notions to Ford in the sense of emphasising regulation as the substance of socialisation; the means of negating ‘capitalist prerogatives’. Though Karleby himself had also argued:


“How can one imagine a social transformation other than by the growth of collective property at the expense of private property, and through legislative changes together with social and cultural policy measures, and through changes in property rights brought about by the influence of free organisations?”

And further Karleby anticipates a

“grinding away of capitalist society in the true sense, a steady progressive growth of new social forms.”  (Karleby in Tilton, p 82)

Hence despite his emphasis on regulation-as-socialism Karleby does not deny the mixed economy.  Though perhaps his position is also suggestive of strategies such as democratic collective capital formation for example.

Again: Ford rejects “predetermined” “socialist structures”. Most particularly this appears to relate to state ownership ; but perhaps it also applies to collective forms of property posed in opposition to exploitative labour-capital relations.  Though Ford also suggests “democratic markets”.  What could this mean?

In truth I have considered “democratic markets” myself.  But here I conceive of a wide variety of producer and consumer co-operative forms, as well as collective capital formation and so on.  I think of workers and consumers organising collectively and co-operatively in the very midst of markets. And I envisage of the state playing an enabling role here: via state aid, including cheap credit, tax breaks and so on.


Still - any role for the state is really the rare exception for Ford.  But is a truly robust mixed economy really “stupid”?

True: Ford and I agree on the need for “natural public monopolies”.  Ford is not specific, but for me here I think of energy, water, communications and transport infrastructure. I also think of near-monopolies in education.  But why not extend strategic socialisation beyond these strictly conceived boundaries?  Government business enterprises can enhance competition in areas as diverse as banking and health insurance; also providing progressive cross-subsidisation where that makes sense. Dividends can potentially be socialised into the tens of billions empowering the extension of welfare and the social wage.  In areas such as mining partial socialisation via some ‘super profits tax’ made sense ; but opposition to a direct public stake here could be seen as Ideological. In any case - even a public sector mining company would operate in a global and competitive market. As could other competitive state enterprises.

Furthermore: ‘the market’ could no-doubt ‘find a way’ to intrude upon just about every facet of our existence. But should we allow for it to do so?  Are ‘markets’ and the profit motive appropriate in Aged Care for example?  The public sector needs to intervene where the market fails.  And market failure takes many forms. This includes the lack of democratic forms; the exploitation of vulnerable people; as well as ‘Planned obsolescence’ and the creation of oligopolies and monopolies which fleece consumers. Also there is the potential for neglect of consumer minorities whose ‘market power’ is not sufficient to ensure the provision of the highest quality goods and services at competitive prices.  Perhaps Ford allows for this final case in his model, however.  Though the question remains: how would that work?

Underlying rejections of a larger role for government is the notion that private ownership is “natural”.  It is considered the ‘default” form of property compared with which the public sector is but a rare exception.

I reject this notion. But I do suppose a large role for competitive private sector markets into the foreseeable future.  A ‘democratic mixed economy’ is realisable in the foreseeable future in a relatively modest form. To illustrate: I personally envisage an increase in public revenues and associated outlays by 5 per cent of GDP – achieved perhaps over a decade, and flowing in to social wage and welfare provisions.  As well as public borrowings for ‘nation-building’ infrastructure.


But ‘autarky’ is not the answer.  As I have argued elsewhere: transnational enterprises from Samsung to Apple respond to ‘the intricacies of consumer demand’. And they innovate under pressure in the context of competitive markets where massive economies of scale are necessary.


Nor should we aspire to ‘nationalise the corner store’.  This has always gone without saying.  Though small-scale co-operatives could also potentially respond to those ‘intricacies’ at the local level as well; while addressing the alienation many workers experience where they have little creative control over their workplaces and their labours.

Australian consumers don’t want to be isolated from the innovations that go on in competitive global markets. And Australian workers also stand to benefit from jobs-creating foreign investment.  I accept this. No-one (or at least almost no-one) wants ‘socialism in one country, Stalinist-style’.  We can gradually build up to a robust democratic mixed economy. But the ‘traditional socialist society’ as epitomised by the old Soviet and Eastern bloc is ‘lost to us’.


In some ways this is actually a good thing.  The old command economies produced a ‘dictatorship over needs’ (Fehr, Heller, Markus) where ‘needs’ were defined ‘from above’ and consumers did not enjoy the freedom to determine their own needs-structures via markets.  Markets can be appropriate to the extent to which they enhance responsiveness to consumer demand, and reasonably enhance personal determination of needs structures.

But we should not adopt an Ideological perspective which closes off the strategic extension of the public sector.  Nor should we fetishize markets – especially where they fail.  And we should not just jettison the Marxist tradition in its entirety – when there is such a rich and diverse range of viewpoints and insights even still.  Even though in today’s more plural Left there is greater tolerance towards the pursuit of ‘ethical’ or even ‘liberal’ socialism.  (a good thing)

We probably can define socialism ‘however we choose’.  But we should also ask ourselves what is reasonable when we return to ‘first principles’.  Socialism began with notions of economic equality; notions of ‘equal association’. There was also the communist notion of ‘From each according to ability, to each according to need’.  And that notion still retains its force today.  Though quite rightly the modern Left has also considered that economic equality alone is not enough to achieve ‘The Good Society’.  A ‘good society’ and a ‘strong democracy’ needs to include a participatory and authentic public sphere.  It must encompass mutual respect and free enquiry.  It must support peoples’ need for economic security; but also peoples’ search for meaning in many-varied ways.  Whereas the Left once focused its attentions on nationalisation too-narrowly, however, the opposite tendency to reject public ownership as a strategy is itself ‘Ideological’. Democratic socialists are learning from past errors.  But it is not a ‘clean break’.  Our efforts today should still be informed to a significant extent by past insights, and past tradition.


Tilton, Timothy; “The Political Theory of Swedish Social Democracy – Through the Welfare State to Socialism”; Clarendon Press, Oxford, 1990
Posted by Vaughann722 at 4:48 PM