Will Labor Stand Up against Small Government and Austerity? And Reflections on Greece, Anti-Semitism and more 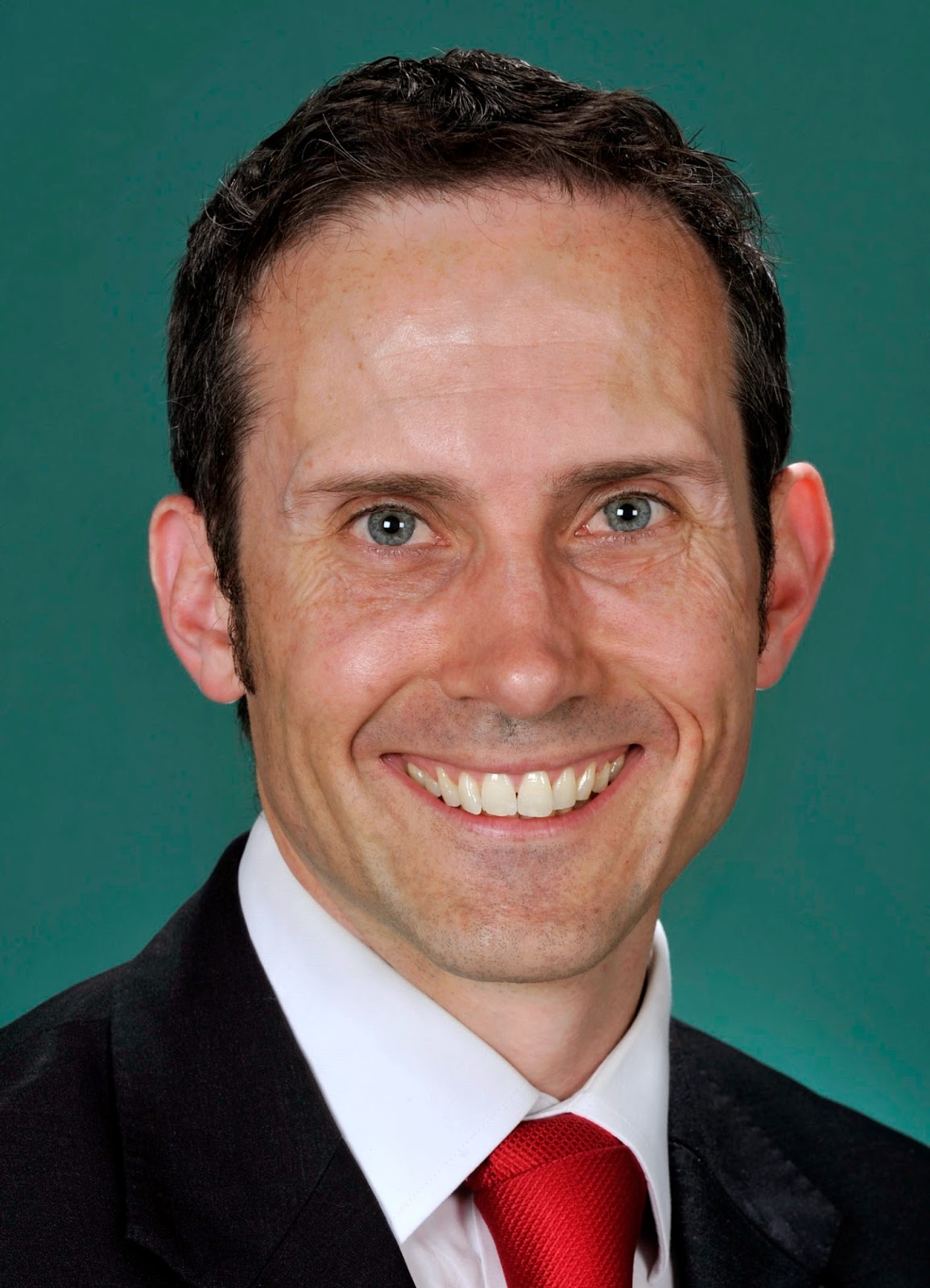 above:  Shadow Assistant Treasurer Andrew Leigh has been unfortunately equivocal on the issue of tax reform needed to ward off austerity under a future Shorten Labor Government.
In the following reflections the blog publisher, Tristan Ewins considers the dilemma faced by Labor on tax reform; as well as the Greek economic crisis, rising anti-Semitism and other issues.  He also calls for readers to register their support for a genuinely progressive Labor Platform at this year's National Conference.  Without such a Platform Labor will lack the flexibility on fiscal reform it needs in order to hold off against austerity - and instead improve the social wage and welfare
Reflecting on this week’s QandA episode raises crucial questions as to whether or not Labor will seriously resist pressures towards austerity and small government amidst a manufactured ‘debt crisis’.  Tony Jones repeatedly pressured Assistant Shadow Treasurer Andrew Leigh to respond on that very question.  And sadly Leigh was largely evasive in response. (probably under pressure from his Shadow Cabinet colleagues)  Statements regarding a crackdown on corporate tax evasion were somewhat encouraging, yes.  But Sydney Morning Herald columnist Michael West is correct to proclaim approximately $2 billion of savings over three years as ‘pocket fluff’.   That tax policy is not going to ‘turn the tide’ on small government, punitive welfare and austerity.  In the context of an economy valued at approximately $1.6 Trillion the effect will be relatively marginal if there is not additional progressive tax reform elsewhere.  Empty rhetoric and tokenistic policies will make little difference for those who need our help.   I believe Leigh is better than this - and am hoping for a less equivocal stand into the future.


Of course Liberal proclamations to the effect that it is ‘cleaning up Labor’s mess’ also need to be met with healthy scepticism.  Current fiscal strains can be traced to repeated tax cuts and ‘middle class welfare’ during the Howard/Costello years.   Rather than capitalising on the China mining boom, investing the proceeds for the future, Costello and Howard implemented a series of tax breaks – largely for the relatively well off – resulting in today’s structural deficit.   Because from the outset it was clear the boom would not last forever, the short-term focus adopted by Howard and Costello condemned Australia to its current fiscal crisis.   (nb: the fiscal crisis is not the same as the ‘manufactured public debt crisis’; debt is serviceable; but there is a need to reform tax to maintain the social wage, welfare, public infrastructure) The situation was further worsened as a consequence of Liberal opportunism over the Mining Super Profits Tax -  which saw a responsible policy destroyed – further locking Australia into a fiscally unsustainable footing.


Labor’s next National Conference will take place mid-year 2015; and it is critical for Labor to reflect on what it stands for; and how it can defend services and social welfare against the Ideological Liberal drive towards austerity.  There is also a need to address an infrastructure crisis – with fiscal pressures locking the country into polices of infrastructure privatisation which pass on inefficient cost structures onto the broader economy. (the consequence of profit margins and inferior costs to finance via the private sector)


What is most important is for Labor’s 2015 National Conference to endorse a Platform which keeps Labor’s options open!  Locking into a small government, low tax policy will provide Labor with no room to move in response to fiscal pressures; and consequently pressures towards brutal austerity. Without a reformed Platform this year, Labor will lack the mandate to pursue the necessary change after the next Federal election. At the blogs ‘Left Focus’ and “ALP Socialist Left Forum’ last year we initiated a campaign in favour of progressive tax reform, reform of superannuation concessions and more; including an expansion of progressive taxation in a first Labor term by about $40 billion.  (or by 2.5 per cent of GDP in the context of a $1.6 trillion economy)


Such a policy would see Australia only ‘edging towards’ average OECD levels of government social expenditure – and should not be viewed as being ‘too radical’.   But failure to embrace a reform footing would inevitably mean sustained austerity even under a Labor government.   And a lack of meaningful opposition to the fiscal policies that underscore Liberal austerity would only strengthen the Conservatives’ hand, with policy convergence on austerity, punitive welfare and the like.


Finally – the fiscal reform we have suggested here would provide scope for other progressive policies.  This could include (but not be limited to)


·         alleviating poverty for the welfare dependent and for low-wage workers


But without progressive fiscal reform  Labor could only provide the same drift towards austerity; even albeit more reluctantly.  Certainly Labor could not pose as the party of social progress; and would stand to cede further electoral ground to the Greens; while also damaging its attempts to renew and inspire its membership base.


Other issues also arose from the most recent QandA.  For instance the argument was forwarded that childcare subsidies only worsened cost pressures as private providers pocketed the money without passing on the savings.   The obvious response is that greater emphasis on public and not-for-profit childcare would help do away with those pressures.


Similarly, it was no surprise that while the question of housing affordability was raised – and even the question of negative gearing – there was no consideration of the potential role of a big investment in public housing to promote urban consolidation (helping to address social problems like increasing transit times to work that damage families and communities); and also increase housing supply and drive down prices.


Greek Depression and the Eurozone


All these questions around austerity are also relevant for Europe, and especially for Greece. Unfortunately Germany had tried to tie an EU financial bailout package to austerity and privatisation – to the point of severely impairing the ability of Greece to repay its debts sustainably.  The Social Democrats in Coalition with the Christian Democrats in Germany need to question this; and promote a new policy. With Greek unemployment at over 25 per cent, the consequence is economic Depression, loss of tax revenues, and unnecessary and extraordinary human suffering.  For Greece and other similarly affected economies (eg: Spain), the answer is one of sustainable economic restructuring, and sustainable repayment of debts on the basis of full employment.  The wealthy must also be made to shoulder a fair part of the burden.  This must mean active industry policies around creating new export industries – that improve these nations’ balance of trade.  Hence employment could be kept high, and the improved balance of trade could aid in the repayment of debts without a downwards deflationary and recessionary spiral; or forced privatisations and the like.   By comparison austerity is a ‘double whammy’: hurting the Greek and Spanish people while also destroying their ability to repay debts.

Importantly there remain broader questions of disproportionalities in capitalist economies: the consequence of competitive pressures which drive constant renewal of the means of production.  The Euro-zone economic crisis also provides an opportunity to question neo-liberal Ideology; and indeed to question capitalism as we know it.


Finally, this week’s QandA also saw a question in reference to growing anti-Semitism not only in Europe but also in Australia.  Anti-Semites appear to have been emboldened by the military policies of the State of Israel in its conflicts with Hamas particularly.  In Europe Jews increasingly feel unsafe – and are targeted violently ‘simply for being Jews’.  But this turnaround has not resulted in the same degree of public consternation on the Left as has  Islamophobia.   And indeed while there is a great deal of damaging ignorance and fear with regard Islam in Australia, the Left nonetheless needs to be careful and vigilant with regard this emboldening of anti-Semitism.  A new generation is being desensitised to the past sufferings and persecution of the Jewish people; and hence some may be open to historical revisionism on the Holocaust into the future.

The targeting of Orthodox Jewish communities appears to be especially fruitful for the anti-Semites – because significant numbers have always been fearful of what is clearly at variance with the ‘mainstream’ and is ‘different’.   On the Left there are periodic qualifications to the effect that while we condemn the military and other repressive policies of the State of Israel, we do not accept hate crimes and violent attacks against Jews.  But we need to be much more consistent and forthright.  We need to confront where the current tenor of debate on the State of Israel and its policies is leading.  For genuine Leftists certainly it is not in any way our intention to legitimise anti-Semitism.  But we have a responsibility to confront the emerging Anti-Semitic trends just as forthrightly and consistently as we confront bigotry against Islamic communities.  And just as consistently as we criticise human rights abuses by the State of Israel under its current right-wing leadership.


Our Campaign in favour of progressive reform of Labor’s platform is approaching the goal of 500 supporters on Facebook.  See HERE for our ‘model Platform’.  And See HERE to register your support.


To help us ‘get over the line’ and maybe even go further depends on your support!  Please ‘Like’ our page at Facebook; and let all your friends and networks know about our campaign.  It is crucial to achieve a Labor Platform this year which at the very least keeps our options open on tax reform, progressive welfare reform, and extensions of the social wage.

nb:  independent socialist blogger John Passant has also written a piece on the insufficient nature of Shorten's proposed tax changes.   Readers may be interested in taking a look:

"Labor's tax avoidance crack down statement was the old pea and thimble trick. It wants to give the impression of doing something about big business tax avoidance (always a popular issue among ordinary workers) without really frightening the big business horses"See:  http://enpassant.com.au/2015/03/03/labors-crackdown-on-tax-avoidance-shorten-fiddles-and-revenue-burns/
Posted by Vaughann722 at 1:12 PM