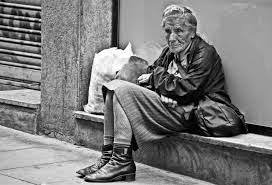 above:   Expect this to become more common on Australia's streets with the implementation of the 2014-15 Abbott/Hockey/Cormann Austerity Budget.


The Government of Tony Abbott has proposed a Budget that makes a mockery of his claim to ‘spread the burden’ of ‘reform’ fairly.   The Budget has also made a mockery of the government’s claim to ‘credibility’ regarding its mandate – and the extreme violation of that which is now going on before our eyes.   Massive cuts to health, education and welfare fly in the face of the Government’s pre-election commitments.


We will now go through some of the most alarming aspects of that Budget drawing on the observations from ‘The Age’ and the “Herald-Sun” .


Health:  The Abbott Government is imposing an additional $7 charge for each GP visit, and an extra $5 for those needing pathology services. (eg: blood tests)   For those with no option but to regularly visit the doctor, and have blood tests taken, this could add up to $120 extra a year.  An awful lot if you’ve just been forced onto Newstart, or had all support payments withdrawn!


Indeed, in  ‘The Age’ Ross Gittins argues health austerity may lead the ‘poor sick’ to delay seeking help until their conditions become acute.  And for those who do not care about anything without a dollar sign attached to it – this could cost the Budget and the economy over the longer run.


The rationale of providing a disincentive for ‘spurious’ visits to the GP is also very doubtful given the already-widespread application of co-payments;  and it is open to question whether pathology services are used ‘spuriously’ in any case.   If the government had balanced these changes with increases to pensions and progressive reform of the tax mix the policy may have sidestepped its otherwise regressive and counter-productive consequences.  But the opposite is now the case.


Education:  In higher education university fees will be deregulated leading to a ‘two tiered’ system at best. ‘Elite’ universities will be free to charge whatever they like – with the very real possibility of $100,000 or even $200,000 degrees. This ‘user pays’ aspect will also be applied to make up for an average 20% cut in Federal Higher Education funding supporting the cost of degrees.


Abbott and Pyne argue there will be scholarships; but the reality will be a quality of education  generally dependent on the depth of a students’ pockets – rather than merit.  (as a consequence of the prohibitive cost)   Arguably ‘equal opportunity’ should involve extra and widespread subsidies and quotas for students with disadvantaged backgrounds.  And an understanding of education as ‘a social good’ beyond labour market requirements.


Student Loan repayment thresholds will fall regressively and interest rates on loans will sit around about 6 per cent.   For someone whose life is disrupted by disability, for instance, (or perhaps parenthood) university debts could easily spiral out of control.  The Conservatives claim students must ‘contribute’ towards the cost of degrees.  But surely this occurs already through the tax system; and progressive tax is the best way to ensure students (and business) contribute proportionately to the financial benefit gained.


The ‘united ticket’ on Gonski is also to be dropped assuming the Coalition wins the next election and has the opportunity to do so.  (though to be honest even Labor was not fully implementing the Gonski recommendations)


Finally on Education the School Chaplains program will receive a boost of approximately $250 million over five years.  But the contempt for which this government holds the poor and vulnerable exposes the lie of their upholding ‘Christian values’.


Local Government: $1 billion over four years withdrawn – probably leading to an increase in Rates or user pays – or otherwise a degradation of services


Aged Pension and Retirement:   The age of retirement will rise gradually to 70 by 2035; and Pension means tests will be frozen for three years – making it difficult even for part-self-funded retirees with limited means.   Arguably we are now living in conditions of great  ‘material abundance’ compared with many decades ago.  Aside from the systemic imperative of endlessly expanding markets under capitalism, abundance means arguments to ‘work us into the ground’ are not practically or morally defendable.


Other Welfare:   This is where the Abbott/Hockey/Cormann austerity really begins to bite against some of the most vulnerable of all.   Despite offensively deceitful  rhetoric of ‘spreading the burden’ the vulnerable will be driven into the most spiritually crushing poverty; and ACOSS has argued this will lead to a possible sharp rise in homelessness given the withdrawal of ‘the social safety net’.


·         Very tough eligibility criteria for the Disability Support Pension;  particularly for those under 35


·         Unemployed under 26 forced on to the abysmally inadequate ‘Youth Allowance’


Furthermore: the *formula* for determining pensions will be altered by the Coalition Government.  Pensions will be indexed to inflation rather than Average Male Weekly Earnings – with a gradual fall in payments ‘by attrition’.    John Collett at ‘The Age’ believes this could cost pensioners $100 a fortnight “in several years’ time”.

The consequence will be utterly desperate circumstances for the jobless; especially the young jobless.  And those without family to fall back upon will probably end up homeless.  (those forced to move away from the support of family to find work will be hit doubly hard) This is the ‘American model’ that the Conservatives seem to be aspiring to.   The creation of a desperate class of working poor – motivated by the very real fear of falling even further down the social ladder – into homelessness; and the destruction of all hope.  But for neo-liberals this desperate ‘reserve army of labour’ is ‘functional’ in weakening the bargaining power of workers.


It is also becoming apparent that the Federal Coalition’s $300 million cut to pensioners’ concessions will apply to everything from water to energy. (so much for fighting ‘cost of living’ pressures) Some ofthe Victorian Conservatives are outwardly angry with Abbott, as $73-$75 million in cutbacks to pensioner concessions will flow on to Victorians specifically. This could be the beginning of an internal rift within the Conservative parties: whose ‘endgame’ could include driving (or for some others providing a pretext) for desperate state governments to lobby for an increase in the GST rate, or a broadening of the GST base.

Theoretically the GST can increase in the context of a more progressive tax and welfare mix to compensate the poor and vulnerable, and average workers. But the odds are more in favour of a regressive mix – with GST ‘reforms’ hurting low income earners and pensioners again who had already been hit hard. Arguably a more regressive mix for Hockey involves a swipe at ‘the undeserving poor’ – in favour of those ‘millionaire wealth creators’, and some ‘self-funded retirees’ whose very comfortable conditions of retirement are effectively subsidised by taxpayers to the tune of tens of billions in tax concessions every year.

Also importantly: with cuts in the Carbon Tax, Mining Tax and Company Tax overall revenue is still likely to fall. The question that follows is thus: Will the GST be promoted to overcome ‘the infrastructure deficit’ – or will infrastructure privatisation reach previously unheard of extremes; with the public being fleeced in the context of ‘user pays’, and the relatively unfavourable cost structures of private enterprise? Few in the Liberal Party (or even Labor) look set to accept the proposition that a mixed economy is better for capitalism, and better for workers and the disadvantaged at the same time. So this Budget is likely only ‘round one’ of a protracted assault upon Australia’s social wage and social insurance.

Those enjoying incomes of around half a million a year will have to pay $6400 extra in tax. But again in a morally abhorrent fashion the government is contending that this has seen a ‘spreading of the burden’.   While millionaires will barely notice the ‘mosquito bite’ that is the temporary, so –called ‘budget repair levy’ – the effect on the poor and vulnerable will be utterly crushing and permanent.

‘The Age’ argues that the Coalition is now set to withdraw $80 billion “from schools and hospitals over the next decade.


Hockey argues Australia is “a nation of lifters, not leaners”.  He has little appreciation of the fact some of us have no choice to lean lest we fall down.  He is willing to judge the vulnerable; but he is unwilling (and probably unable) ‘to walk in their shoes’.    Under such circumstances the civilised and compassionate thing to do is to provide support for those who have the need.   Altering the formula for calculating pensions as they are, the Conservatives instead exhibit contempt for these people.


The Liberal Government would likely want to play down the legitimacy of claims to disability pensions on the basis of mental illness, for instance – playing upon popular misperceptions in order to legitimise a callous agenda.  Liberal MP Andrew Robb could possibly set them straight on that were they willing to listen…  If he has it in his heart perhaps he should make some kind of statement against these attacks against disability pensioners.  (many of whom do not have relative material wealth to fall back on)


Finally ‘labour conscription’ applied to disability pensioners able to work 8 hours or more a week  comprises further cruel exploitation of the most vulnerable.   Better to provide positive incentives for flexible community work – with untaxed payments on top of the pension -  rather than ‘the big stick’.  Flexible opportunities are crucial as disability can inhibit a person’s ability for regular work.


Abbott’s radical abandonment of the welfare state comprises both a rejection of ‘Catholic social welfare Centrism’, and also of the very-conservative but welfare-minded tradition of the Democratic Labour Party from which Abbott originally emerged.  It flies in the face of Pope Francis’s warnings about the dangers of unbridled capitalism lacking of social conscience.


What remains to be seen now is how Labor will respond over the coming years. Will Shorten ultimately capitulate on welfare, social wage and social insurance in order to maintain ‘small government’; or will he follow the principled path instead of ‘short term opportunism’?


In the meantime progressive social movements need to coalesce and prepare for the fight of their lives.