pls scroll down for article 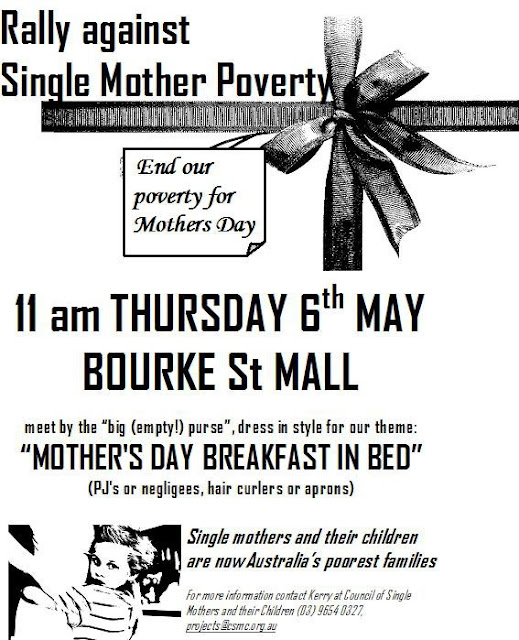 above: Flyer for Melbourne demonstration May 6th for the rights of single mothers and their kids
Activist, Helen Said demands a fair go for single mothers and their families amidst unfair laws surrounding welfare and work.  Please show your support if you can by attending the rally - or if that is geographically impossible - by passing news of the rally to your friends and through your networks...

Single mothers are to stage their biggest protest this decade at 11 am on Thursday 6th May in the Bourke Street Mall, Melbourne. The Council of Single Mothers and their Children’s Action Group have planned the rally to coincide with the Mother’s Day shopping frenzy. Calling for an end to poverty for single mother families, the Action Group is urging members and supporters to “dress in style” for the theme “Mothers Day Breakfast in Bed.”

Welfare to Work legislation and changes to the Child Support Payment formula, introduced by the Howard Government in 2006 and retained by the Rudd Government, have plunged many single mother families into dire poverty. ACOSS describes single mothers and their children as “our poorest families.” Single Mothers and their children are now the largest single group of homeless people in Australia. CSMC have experienced a massive increase in demand for food vouchers, shelter and assistance with back to school fees since the implementation of these changes.

Under Welfare to Work, women who separated from their partners after July 2006 are put on New Start Allowance rather than Parenting Payment Single. New Start is a lesser payment with a lower earning threshold before payments start being reduced. Single mothers on both New Start and PPS are classed as “Job Seekers with a part time work requirement”.

As “Job Seekers”, single mothers are forced to either work or search for work 52 weeks of the year, even if they satisfy Centrelink work requirements. There are no aftercare or holiday programs for secondary school children, which means that children as young as eleven are being forced to fend for themselves whilst Mum is pressured to work, under threat of losing her benefits. If a single mother doesn’t find a permanent job with paid holiday breaks it is technically illegal for her to take a holiday with her children. If a mother in casual employment takes time off work for any reason she is expected, as a “job seeker”, to apply for new jobs even if she has a job to return to. This puts more stress on her family and wastes employers’ time with bogus job applications.

The only way a single mother on income support can take a break from the part time work/jobsearch treadmill, for her own health and wellbeing, is to apply for an exemption, often by getting a doctor to declare that she is suffering from an anxiety related medical condition. My own observation as an activist, witnessing the increased pressures on single mothers, is that the “happy housewife pills” of the 1960’s are set to become the “post-separation medication” of the new century.

New Child Support Payment rules reduce the amount of money single mother families receive from their children’s fathers if the children spend increased time with Dad. Whilst this is works out well in families where Dad eagerly contributes to his children’s wellbeing, it has disadvantaged those children whose fathers refuse to foot the bill for their education, recreation or everyday needs.

Welfare to Work legislation was introduced during a period of labour shortage under the Howard Government. Traditional welfare agencies and other employment services are contracted to administer “one size fits all” services to the unemployed and under-employed. Injured workers, mothers returning to work and unemployed school leavers are forcibly lumped together in “job search training” classes regardless of their reasons for being out of work. In some cases these classes have disrupted existing work arrangements and caused people to lose their hard won part time jobs. Some of these employment service providers force job seekers to make ten “job contacts” a day under threat of losing their benefits. In my own case, one of these agencies rewrote my resume, without my knowledge or consent, saying that I was “physically fit for manual work” (when in fact I was a 50 year old university graduate) and put this bogus resume on a nationwide employment database.

My own experience of such “retraining”, after spending ten years at home with a special needs child, was a seven week “taster course” in teachers aide training accompanied by an empty promise of a traineeship, when in fact underfunded schools are forced to advertise that “junior wages apply” and reject older applicants. After lobbying from unemployed students, the “taster course” was then followed by the offer of a free Cert III course from the Australian Education Industry Centre, which itself received no government funding, and consequently went into receivership half way through our course. This left many single mothers, older job seekers, disabled job seekers and new immigrants in limbo, back at the mercy of the Centrelink sausage machine.

Welfare to Work isn’t working. It has placed many single mother families in dire poverty whilst enabling employers to exploit single mothers as cheap labour in transient jobs. The Council of Single Mothers and their Children has been forced to return to the activism of forty years ago, when unmarried mothers fought for the right to keep their babies rather than giving them up for adoption. Single mothers have now been left with no choice but to take to the streets and protest against this government’s policies during an election year.

nb: the details for the coming single mothers' rally in Melbourne May 6th are above.  Scroll up for details - and PLS attend to show your support if you can!

AND ALSO: If you enjoyed this article pls join our Facebook group - to link up with other readers, and to receive regular updates on new material.