The Meaning of ANZAC Day 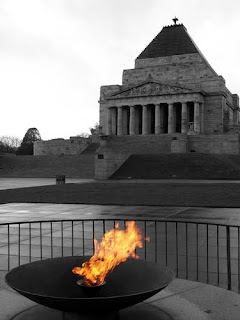 above: The Shrine of Remembrance in Melbourne, Australia.  Built originally to commemorate Australia's fallen in World War One.


ANZAC Day is the day on which Australians remember those fallen in war.  In this article Tristan Ewins considers the real meaning and relevance of that day.

ANZAC Day is a day of remembrance for Australia and New Zealand: a time of reflection upon the involvement of those countries in terrible wars. Specifically, the term ‘ANZAC’ is derived from the words “Australian and New Zealand Army Corps”: the military organisation within which Australians and New Zealanders fought in World War One. http://en.wikipedia.org/wiki/Anzac_Day

All in all almost 80,000 Australians and New Zealanders died during the First World War: and many more still were terribly maimed, or left with grievous psychological scars.

The day has also developed to be considered a day of remembrance with regard to all wars and conflicts in which Australia and/or New Zealand have been involved. It should also be mentioned, therefore, that in the Second World War almost 30,000 Australians died. And tens of thousands suffered terrible cruelty as prisoners of war – especially of the Japanese. http://en.wikipedia.org/wiki/Military_history_of_Australia_during_World_War_II

More recently annual commemorations of the Gallipoli campaign in Turkey have seen tens of thousands of Australians undertaken a ‘pilgrimage’ to ANZAC Cove. The bloodbath of Gallipoli has been established as a cornerstone of Australian identity.

Australians have also been involved in conflicts in Korea, Vietnam and more recently elsewhere – including Afghanistan and Iraq.

In modern times AZNAC Day has been developed into a day whose meaning and significance is hotly contested.

Australian academic Marilyn Lake has contributed to a book: ‘What’s Wrong with ANZAC?’ - along with Henry Reynolds, in which she dares to criticise the ‘ANZAC legend’. Her views were expressed recently and concisely, also, in an op-ed in ‘The Age’ – a Melbourne newspaper.

Lake criticises the ‘coming of age’ narrative: the idea that Australia needed its ‘baptism of fire’ to prove itself in the horrors of war, and thus take its place amongst the nations. But instead Lake sees a way beyond what she calls ‘the AZNAC myth’:

“until we have the courage to detach ourselves from the mother country, declare our independence, inaugurate a republic, draw up a constitution that recognises the first wars of dispossession fought against indigenous peoples. Thus we can truly make history in Australia.” http://www.theage.com.au/opinion/fight-free-of-anzac-lest-we-forget-other-stories-20090422-afb5.html

For Lake, ANZAC is a myth which excludes women: essentially “[locating] our national identity in the masculine domain of military warfare.” Further she sees the ANZAC story as eclipsing other narratives: of struggle against war and oppression, racism and sexism; and “the democratic social experiments and visions of social justice that once defined Australia.” http://www.theage.com.au/opinion/fight-free-of-anzac-lest-we-forget-other-stories-20090422-afb5.html

As many of us would have expected, the reaction from the dominant right-populist elements in Australia’s media has been one of apparent outrage and indignation.

Neil Mitchell from radio 3AW in Melbourne might be considered a liberal in comparison to Melbourne Talk Radio’s Steve Price, but on April 21st he went so far as to say about Marilyn Lake and other contributors to ‘What’s wrong with ANZAC?’:

"I think today there is screaming proof that some academics should be legally required to get a real job, in the real world, and be legally required to keep their mouth shut…. A bunch of academics have announced today that ANZAC day is past its use-by date and is just an exercise in male bonding which is not diversified enough for modern Australia… For heavens sake, what do they want, do they want marches for vegetarian lesbians?” http://www.3aw.com.au/blogs/3aw-generic-blog/is-anzac-day-past-its-useby-date/20100421-stj7.html

Mitchell’s treatment of the matters raised by Lake and others is regrettable as it trivialises the critical issues raised in ‘What’s wrong with ANZAC?’ concerning colonialism, and what Lake has called “the militarisation of Australian history”. His response also needs be called into question in that it challenges that right to dissent and free criticism which really ought to be at the heart of our identity as a liberal democracy.

As Lake observed in an interview with Mitchell, though – also on April 21st – war destroys men. Many Australians who experienced war in the 20th Century were so deeply scarred not only in their bodies – but also in their hearts and minds - that not only did they not march on ANZAC Day, but they tried to avoid even talking about those experiences.

For now, though, we will consider the Australian experience in World War Two.

There is no problem in solemn commemoration of the costs of war. And indeed we should remember that in the Second World War Australians played a vital role in fighting fascism in Europe and North Africa, and ending Imperial Japanese domination and oppression of Asia and the Pacific.

From my own perspective, my grandfather served in Singapore during World War II as a Corporal in the 8th Division Australian General Hospital. My grandfather did not wield a rifle. Rather he was an ambulance driver whose job it was to save lives. Apparently his bravery in the face of fire, rescuing the many wounded, was such that his mates would later quite earnestly insist he deserved a Victoria Cross. In military history, however, this kind of bravery is seldom recognised.

In the heat of battle my grandfather’s leg was shattered by gunfire. He was taken prisoner by the Japanese, and witnessed incredible cruelty during his many years in Changi POW camp. Beatings and torture were common. POWs were subject by Japanese guards to cruel and unusual punishments, and summary executions under the most brutal of circumstances. I have been asked by family not to go into details as “the men wouldn’t want it”. But while I’ve accepted this, I do still hope somehow the full story will come out – and for survivors to receive the recognition they deserve from the Japanese government.

In Changi food was scarce also. Prisoners were sometimes fed banana skins – and if they were lucky a handful of dirty rice. Malnutrition, and conditions such as beri beri, malaria, dysentry and infections were common.

Australian and other POWs were also used as slave labour – even when they were obviously ill or wounded. Thousands thus were to die in captivity.

Specifically, my grandfather had contracted beri beri and malaria while a POW in Changi. Beri beri was generally caused by a lack of Thiamine (B1) in the diet. The most visually obvious symptom was extreme swelling, including of the stomach. (akin to images many people will have seen of starving children in Africa) Symptoms included paralysis, mental and emotional disturbance, awful pain, vomiting: with the risk of heart failure and death. http://en.wikipedia.org/wiki/Beriberi

Women also endured suffering and brutality in Changi at the hands of the Japanese. One such Australian was Vivian Bullwinkle, a nurse in the 13th Australian General Hospital. http://www.awm.gov.au/exhibitions/fiftyaustralians/5.asp

Attempting to flee Singapore, Bullwinkle’s ship was sunk by Japanese bombers. Some of the survivors managed to make their way to shore: but none would have anticipated what happened next. First male survivors were bayonetted. Thereafter, Japanese troops gathered the women together and ordered them to wade into the ocean.

What followed was a barrage of Japanese machine gun fire. All the women were thus slaughtered: with the exception of Bullwinkle herself, who while injured (shot in the hip), feigned death. Fortunately, when later captured by other Japanese soldiers, these did not know of the atrocity, and Bullwinkle was formally taken as a prisoner of war. (POW) http://www.vivianbullwinkel.com/documentary.html

The next few years were to be a living hell. Eight of her nursing colleagues where to perish of starvation. But Bullwinkle survived. After her liberation, Bullwinkle committed herself to nursing, and worked to raise awareness about Japanese wartime atrocities. http://www.vivianbullwinkel.com/documentary.html

The point of these stories is to emphasise the extent of the endurance amdist suffering of Australian POWS: soldiers and nurses. The spirit of mateship, especially: of camraderie between soldiers in intolerable conditions; ought never be forgotten. For women, these stories are also crucial: the Second World War was a time of transformation and of perseverance amidst hardship for women as well as men. ‘Total war’ mobilised and impacted upon the lives of women as never before.

There are some who look upon these stories as relics of a past-age: of a ‘White Australia’ which no longer holds resonance. But if we insist on an inclusive narrative of Australian history: why should these stories be excluded? And why ought Australia’s diverse communities – welcomed into the Australian nation – not take these stories also as their own? That is: a narrative which emphasises solidarity between ordinary people – even in the worst of circumstances?

But this ought never be distorted into a nationalist device which glorifies war as ‘the making of men’ or ‘the birth of nationhood’.

There is a danger that uncritical celebration of Australia’s military traditions and history could well give support to those today who seek to legitimise Australian participation in unjust wars in the here and now – by reference to such sentiment.

It is troubling even today to hear talk of the First World War as a ‘fight for freedom and democracy.’ These kind of rationalisations, it should be remembered, were employed by the Germans as well. In reality the war was a struggle not only for domination of Europe, but to carve up the world into spheres of influence; spheres of imperialist exploitation. In World War One soldiers of the Australian Dominion fought for the interests of the British Empire.

We should never forget the suffering and the sacrifices of Australian men and women in wartime. And we should celebrate and sustain traditions of solidarity even in the worst of circumstances. Furthermore, again to this day there are survivors of, and families of those who experienced war-time atrocities: who have waited decades for recognition by a Japanese government that remains in denial.  Even today – with time running out – these people deserve justice.

But also, we need to recall the human costs of war in the broadest sense: that war ought only be a last resort in the face of oppression and conquest which threaten our lives, our rights and our liberties. And even then we need be aware that there are those would appeal to such values: but behind whose rhetoric there lies cyncial geo-politics.

To conclude, regardless of the importance of Australian wartime stories, we should take seriously claims by Marilyn Lake and others of a “militarisation” of Australian history.

The narrative of Australian history needs to be broader: telling also of Australian egalitarianism and democracy; and also of the struggle for recognition and justice amongst Australia’s many-varied communities.

The fight against fascism was a crucial one, but we should not harbour illusions about the nature of other conflicts: allowing them to be rationalised behind a veil of nationalism.

Behind mock-populist outrage about the contributions of Marilyn Lake and others there is a debate that needs to be had about Australian identity and history. We should never forget - but we ought never abandon our critical faculties either: especially when it comes to matters of war: of human suffering, and of life and death.