It seems so unfamiliar for Australia. The means: strikes, rallies, angry public meetings. The end: imagined utopias of plenty. Fast forward to now: stage managed sound bites; free market feast followed by unemployment famine as capitalism lets the world down again and people start to ask why. The author, like many others in his generation of political activists, thought that Australian history was limited to the ho hum of federation, but this book shows that there was a time when the great philosophical clashes of the 20th century played themselves out in Australia: when Australia was a programmatic pacesetter for the international Left, rather than a reluctant follower. And that all of this unfolded within sight of the Sydney Harbour Bridge.

Geoff Robinson’s “When the Labor Party Dreams - Class, Politics and Policy in NSW 1930-32” by Australian Scholarly Publishing is an excellent account of the period of the last Lang government: a period of Australian history that has attracted many attempts at examination and consideration, be they in print or documentary or drama.

Geoff Robinson's book stands out primarily for two reasons. The first is that Geoff has a background as a Labor activist. He has been inside the belly of the beast, and he employs new historical methods to get down to look at the sympathies of different social groups. The result is a history of the every day: the experience of the masses rather. And he avoids being mesmerised by high politics. In the past, the larger than life Jack Lang has loomed large over other efforts to look at this period and overshadowed attempts look at the day to day.
Most significantly, this book addresses a key theme that still challenges left governments around the world today: and that is the contradiction of a government that wants to change capitalist relationships of production and accumulation, while operating within the capitalist system itself. On one hand capitalism and its failings drive a desire for change amongst the Left and its working class supporters. But on other hand capitalism and its successful operation are linked to material prosperity and employment. After all, redistributive taxation relies on production for its success. The Lang government is very important because it represents the most conscious effort by any government in Australian history, so far, to change prevailing social and economic
arrangements. This sets Lang apart from the contemporary incrementalists in modern Labor.

The acceptance by modern Labor of the market driven privatisation / deregulation "small government" model, which is universal across the Australian political spectrum now, makes contemporary Labor’s position on economics indistinct from the position of their conservative opponents. The key policy differences now lay in environment, social and IR policy. In the 1930s, economic policy was one of the key areas of policy difference between the two major parties, particularly in NSW. Lang, and NSW Labor more generally, were unconvinced that free market solutions would mean socially just outcomes for their constituents or create the kind of society they wished for. The Great Depression had also only emboldened advocates of socialist ideas in the party, who had been active since the 1920s. But we should remember not to see the world through rose tinted glasses though, Prime Minister Scullin, Lang's Federal Labor contemporary in the ‘30s, opted for very orthodox economic solutions himself in the face of the same crisis.

Many of the conservative detractors of government intervention in the economy have always painted the activist approach as some Sovietesque grand monopolistic endeavour that seizes whole sectors of the economy. It’s worth looking at the practice of other Labor governments in the early twentieth century, many before Lang, can still be see today in institutions such as Medibank Private, was a desire to achieve 'fairer' outcomes in the context of the operation of the market. This was usually in the form of a tripartite board or non-monopolistic government backed competitor. The interesting thing about this approach was that the stakeholders that NSW Labor played to were not always the most obvious: and sometimes it faced the dilemma of multiple sympathetic parties with competing interests too. For example, in agriculture, NSW Labor favoured the producers and the consumers and tried to squeeze ‘unproductive’ middle men.

When considering Lang historically, we need to remember to look beyond the volatile domestic political situation and the precedent of his sackingm by Governor Game, the first of two sackings of elected governments in Australian history. We need to remember the international historical context too. At this point the famous ground breaking Swedish and British centre left governments that led later to the rise of the post-war welfare state were only just struggling to consolidate their hold on power. Meanwhile the Soviet Union was still in its first decade, the horrors of collectivisation and other catastrophes not known to the wider world yet. The failure of orthodox economics had also led to the rise of Keynesian economics too during the same period. And after all, Australia did have the first elected left government in the world in the late 19th century - so Lang’s actions were followed all over the world. Though the Depression was heartbreaking for millions of working Australians, Australia had been the richest country in the world at the end of the nineteenth century, and still enjoyed relatively high living standards in the 1920s. Despite the affluence at this time, Australia was still a hotbed of union activity and left wing politics.

The other forgotten aspect of the history of Lang and his government is that it also represents the most successful 'minor' party in Australian history. While Lang and his supporters came very much from the labour mainstream, under the extreme challenges of the Depression, they chose to break with Federal Labor nationally and follow their own course.

Lang's failing, ultimately, came from two things: first his failure to build a broad enough coalition to maintain power. The organised working class was a significant player in 1930s Australia - but union membership, even amongst working class Australians still hovered around the 40% mark. Though in some sectors, like agriculture, it was almost non-existent. The largest economic players, and employers, were in the public sector but most workers worked in small factories in the private sector and identified their employer’s success with their own material well being. His inability to deal with the bugbear of unemployment, a key issue for his core constituents, also didn't help the longevity of his government. This highlights the challenges of a left wing government under capitalism again. While Lang ultimately failed, the fact that he and NSW Labor were courageous enough to try make their utopias a reality sets him apart from the stuff of modern Australian politics. 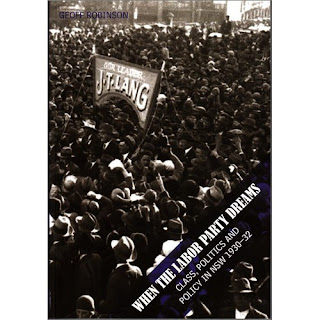