One comrade doth not maketh a movement... 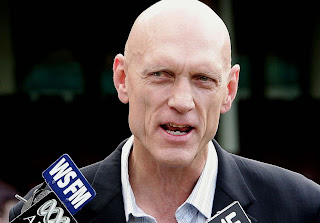 above:   Once seeming to promise much, for many Peter Garrett has failed to shine as a politician.
In this political commentary piece, Geoff Drechsler questions inclinations in the Australian Labor Party (ALP) to turn to 'high profile' 'celebrity' candidates.  For Drechsler the real business of politics is in grassroots mobilisation and cultural struggle.  If Labor is ever to return to the 'front foot', it is a lesson its leaders must learn...

The recent spectacle of Peter Garrett failing federally, and Minster Madden’s current travails in Victoria, highlight a longer term issue that the labour movement and Left needs to wary of - specifically the incapacity of individuals alone to be a catalyst for any meaningful change. And more generally how to achieve reform and change while participating in existing political structures and institutions.

Both these individuals seem cut from the same cloth. Both have celebrity status: Garrett as a rock singer in band Midnight Oil, and Madden as a professional sports player. Also, both have previously professed to have held more left wing philosophical positions than their current political affiliations: Garrett as an almost Nuclear Disarmament Party senator in the ‘80s and Madden as an associate and rumoured one time running mate for former left wing independent federal member, Phil Cleary. Both now are the personification of moderate Labor (with the exception of the odd reunion concert appearance for Garrett). For a while there has been press gallery gossip that each saw themselves taking responsibility for more important roles in the future sometime (though Garrett would want to be a patient man in light of recent events), and most importantly neither have been associated with any kind of dissent or alternative agenda within caucus or the broader Labor Party since their arrival in parliament.

For this exercise, there is no need to consider the commitment of these individuals to social change (being left wingers we have faith in human nature and we willl give them the benefit of the doubt and assume that they both have “the fire in their belly” still). The real issue is whether or not they, as high profile progressive individuals alone, can be the catalyst for any sort of meaningful change in the direction of the currently cautious Labor governments that they are part of. Unfortunately, the answer to this question is a resounding “no”. What is needed is, first, political education and discussion followed by the dissemination of ideas, with activists engaging party members and supporters through campaigns around achievable goals.

In the broader community, any sort of left wing agenda or program is going to be filtered through an increasingly right wing media who owes us no favours. This undermines the process of reform as with a diluted or confused message it becomes more difficult to mobilise supporters around goals and achievements. This is more concerning in a period of declining party membership of left and centre left parties (with the exception of the Greens), breaking the ability of a political organisation to directly contact its members and supporters and mobilise them.

Also, all of this can be seen as part of a broader process of ‘presidentalisation’ occurring in Australian politics, where, like America, the media, and therefore the broader community focuses on the one individual, currently Rudd. While the author would not wish to suggest the Prime Minster is not capable of carrying out this solo role (all evidence suggests he is well suited intellectually at least), ultimately this practice undermines the likely longer term success of his government as a reforming government, and creates issues regarding continuity in the wake of his departure. There are countless examples of other left of centre leaders who have variously enjoyed significant personal popularity at times, but have stayed too long - Helen Clark in New Zealand, Tony Blair in the United Kingdom etc.

Furthermore, any meaningful process of change will last significantly longer than the period of any one particular individual’s term of office or tenure. It is not unreasonable to assume that any significant programme reform would take a generation to implement and show results (Sweden as an example) in an advanced capitalist society, be it thoroughgoing social democracy or of a more Marxist orientation. Alas, also locally unfortunately, rolling back all of the mad, bad and sad things that the Liberals did in the previous ten years will take a lot longer than one term in the Australian context too.

Even a majority of left wing MPs in a parliament, without significant grass roots activity in wider civil society through familiar allies, like the trade union movement and party activists, is unlikely to get far in the context of an advanced capitalist society. Those who favour the status quo have had the opportunity for plenty of practise preserving it. Ultimately, it comes back to creating a political culture of participation, not because we have some predilection towards internal democracy (we should have that too for other good reasons) but because the first step is “getting the message out” and spectators are only ever that - spectating.

As the refrain from the classic ‘80s Redskins tune goes "Take no heroes, only inspiration..."


nb: If you enjoyed this article pls join our Facebook group - to link up with other readers, and to receive regular updates on new material. see: http://www.facebook.com/group.php?gid=58243419565

ALSO - HELP US BOOST OUR READERSHIP!! :

Currently Left Focus is attempting to boost its readership by advertising in Google. As best as the blog owner can understand this is supposed to cost $5/day for a basic effort. Advertising in Facebook is another thing we're considering. But any kind of promotion like this costs money.  We would really appreciate donations.  If you think you can support us, follow the 'donate' link in the left column.  And if you do so, please contact the owner also.  (to ensure he knows about it, and so all donations go towards the promotion effort.)

And if you have friends who might be interested in Left Focus - pls consider referring them to the blog; and also to our Facebook group.  If we can broaden our readership this way also - without spending on advertising - then it would be so much the better!