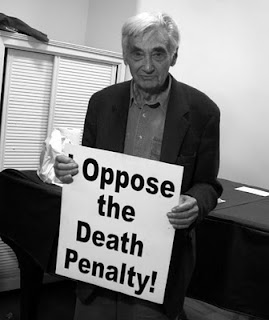 above: Howard Zinn - Standing up for Human Rights
a Eulogy by Wes Bishop

On the evening of January 27, 2010 President Barack Obama was nearing the end of his first State of the Union Address.

Before a joint session of Congress, before the leaders of the military, his cabinet, and the nine Supreme Court Justices, Obama addressed the people of the country by talking in front of its most powerful individuals.

Meanwhile, in California an aged scholar and historian was drawing his last breath.

The man was Howard Zinn.

It is strangely poetic that Zinn would pass away on the night when all the power brokers of the country were meeting in a single room. Throughout his long life he had been a direct challenge to the establishment, arguing that true democracy did not occur in the halls of power but instead in the streets and homes of everyday citizens.

He popularized this idea, while gaining national fame and almost pop culture status, when he authored the best seller A People’s History of the United States.

The People’s History, when first published in 1980, was a breath of fresh air for professional historians and the general public alike. It drew both criticism and praise for re-examining such topics as the genocide against Native Americans, the labor movement, women’s rights, slavery, imperialism, and the various anti-war movements.

Although the People’s History is Zinn’ best known work it was in fact one piece of scholarship that fell in between a life of academics and activism.

Born on August 24, 1922 in Brooklyn, to Jewish immigrants, the young Zinn came into a world highly divided by class. Class that was solely based on economics. Zinn would later report that his father, who worked as a waiter, was one of the hardest working men he knew, yet for all of his hard work he was largely unable to move forward in society. It would be one of the first lessons that Zinn would experience in regards to American capitalism and do much to dispel the idea that people could make it rich if they only worked hard enough. Such sentiment, Zinn would later criticize, was one of the foundations for people having animosity for the poor and struggling middle class, because with that ideology came the notion that if you were poor and powerless you were doing something wrong.

This early establishment of a love for the underdog, and a reverence for liberty and freedom, carried Zinn into World War Two as a bombardier. Eager to fight fascism and rid the world of bigoted empires he was astonished to witness racism with his fellow soldiers. In one incident Zinn reported that he came down on a fellow Caucasian soldier that was angry over an African-American eating at the same table. Zinn was outraged at the soldiers behavior asking the servicemen what exactly America was fighting in the war against Hitler.

This anger over bigotry would soon be coupled with outrage for Zinn has he witnessed the whole sale bombing of European towns, acts of war that claimed many an innocent European civilian. Revisiting some of these cites years after the war Zinn learned that towards the end of the conflict the military had chosen a route of fighting that disregarded human life, benefited military testing, and made little distinction between enemy combatants and innocent bystanders.

Returning to the states after the war Zinn took all of his medals that he had received, placed them in an envelope, and wrote across its surface these simple words- “Never Again.” For the rest of his life Zinn would advocate and practice the liberal ideal of pacifism.

And so began a long career of academia. In one of his first professorships Zinn offered advice and helped foster the spirit of the civil rights movement on the college campus. For his endeavour he was fired. To add insult to injury the college that fired him was Spellman College, an institute of higher learning that was an African-American girl’s college. It is bizarre that such a thing could occur but as Zinn repeatedly made clear throughout his life injustice and apathy to societal ills can be committed by any segment of the population.

Like many that had come before him he viewed his ascent in society not as a justification for solely bettering himself and his economic standing. Instead he understood that those in a position such as his have a duty to serve, educate, and assist all rungs of society.

As a young educator in the social sciences, the lessons and material Zinn made available over his long life are veins of work that will continue to benefit classes of students long after all those who knew him are gone.

We can view Zinn, and his ideas, as many a “patriot” have. That is to say with a knee-jerk reaction that confirms the suspicions of deeply embedded nationalism. Or we can take Zinn’s work, learn the many lessons from it that are available, and work to craft a more perfect union.

As Zinn said once, “There is no flag large enough to cover the shame of killing innocent people.” Life is too precious, democracy to dear, to treat government policy and human existence as flippantly as a move on a strategic board game.

Democracy is rule of the people. We should never forget that in democratic countries the policies of the powerful should always work to benefit the populace and not institutions, ideologies, or governments. It is at both times a simple and profound position to espouse, and it is one that Howard Zinn faithfully proselytized to all those who would listen. For this he will be missed, and always remembered. 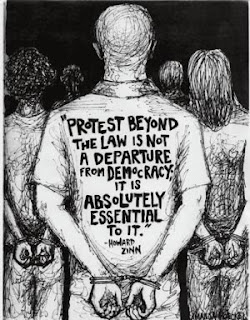