ALP and the Unions – Where to from here? 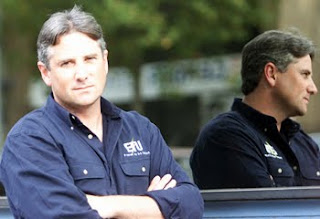 above: the author, Dean Mighell
What follows is a controversial discussion concerning the future of the relationship between unions and the Australian Labor Party.  Respectful discussion is welcome here from both sides of the debate - and I will be publishing my own reply here next week.  If anyone would like to submit a piece of their own on these issues, pls feel welcome to approach me with proposals...
article by Dean Mighell; Electrical Trades Union Victoria Branch State Secretary

In 1972 Gough Whitlam changed Australian politics forever with the mantra "It's time". Today the same slogan should apply to Australia's unions because it is time for them to break away from the Australian Labor Party and stand independently for what they believe is right. There's a great unspoken truth in Australia's labor movement at the moment and if it is not addressed soon the future of this country's unions as the effective political voice of the workers is in serious jeopardy

Everyone will remember Tracey, the highly stressed working Mum who featured on the ACTU Your “Rights at Work” TV ads. Well Tracey, if you still work in a workplace with less that fifteen employees you can still be sacked unfairly and worse, Gillard has reduced your basic Award conditions under their “modernisation” program. Despite Rudds election promises many thousands of Australian workers now face a reduction in their working conditions.

A new relationship between the ALP and unions that is based on mutual respect is desperately needed. In Scandinavia unions and the Social Democrats have an alliance, not affiliation. In the United States, unions largely support the Democrats and their campaigning and finance is critical though they have no affiliation mechanism. They effectively lobby Republican politicians on many issues and some unions actively support Republican candidates if they believe it is in their members’ interests. Our system differs but the principle remains. The union/Labor relationship has its history in the British model and if that’s utopia for workers, I’ll give it a miss.

Today, both Labor and the Liberals now look to the polls rather than the party Conference for policy making despite the theatre. There can be no more glowing example than that of industrial relations policy. Labor has effectively adopted most of the Howard governments IR policy and rebadged it and refers to it as “Fair Work” but in reality, big business and their representatives have had unprecedented access to Labor and are delighted with the results. Even Howard’s Building Industry Taskforce has been retained to the delight of multi-millionaire builders and developers.

I well remember when John Howard ushered in the 1996 Workplace Relations Act. Peter Reith was Industrial Relations Minister and the ACTU denounced the legislation as the ultimate, anti-worker evil. Union anger was at boiling point and Reith was demonised at every turn. Now there is a deafening silence from the ACTU as Labor governs and workers rights and conditions are attacked.

The truth is that Howard’s laws at the time - as bad as they were - gave workers and their unions a much better go than Rudd and Gillard’s Fair Work Act. When Howard controlled the Senate he then took it too far and paid the ultimate political price

In the lead up to the last Federal election workers rights were the main game and the unions went on a full frontal assault with the “Your Rights at Work Campaign” led by the then ACTU Secretary Greg Combet.

Interestingly, the ACTU sacked the public relations firm that crafted this campaign after Labor won office choosing an ALP friendly and un-unionised organisation in its place. Clearly, campaigning like the YRAW campaign is off the agenda at the ACTU and it’s now about ‘”branding” and spin. Combet is in federal parliament and the ALP ensured the decent yet ultra conservative Jeff Lawrence would replace him at the ACTU.

During the recent Senate enquiry into the Fair Work Bill, the ACTU refused to buy into the debate that the Bill contained many breaches of human rights as defined by Australia’s international obligations under International Labour Organisation conventions. If the ACTU is so severely compromised by the ALP relationship that it can’t stand up and fight for basic workers rights then something is seriously wrong.

Only after my union laid a complaint to the ILO and the Victorian Trades Hall Council agitated at the ACTU Executive level, did the ACTU decide to examine the Act against ILO standards and then only after the Fair Work Bill had become legislation. Damage done, deal done. Belatedly, they have identified 15 serious breaches of human rights. The ACTU’s statement that “on balance”, the Fair Work Act met Australia’s ILO obligations looks a little sad. Australian workers have every right to feel let down.

Union membership numbers for many unions has declined and so too has the influence of the ACTU. In recent decades the ACTU has absolutely refused to adopt a policy that is at odds with the ALP and this strategy simply hasn’t delivered. A better strategy is required.

The challenge for unions is simple, create unions that workers want to join. The financial membership of the Victorian Branch of the Electrical Trades Union has grown every year since 1995 despite the massive job losses through electricity privatisation, manufacturing decline and bad IR laws. Unions like the Nurses Federation and Police Association have had large growth too. Neither are affiliated to the ALP in Victoria. We have close to two thousand apprentices as members under the age of 25. So much for young workers not wanting to join unions. Our members like us to be outspoken on political issues that effect them but have little respect for party politics.

Many workers are skeptical that ALP affiliation is too often a mechanism to ensure pre-selection to a safe Labor seat for a few union leaders and they rightly ask, ‘to what end?’ I’ve seen too many union leaders that think the ALP is the “main game” and spend most of their time wheeling and dealing in the ugly factional process. Make no mistake - I’ve done my bit too. However, I’ve always known that a union’s mission is looking after workers and growing our unions and not pre-selection.

Unions must get politically smarter and more strategic. Collectively, we represent close to two million Australian’s directly as members. We act to protect millions more. We proved with the “Your Rights at Work” campaign that we can be Australia’s most powerful lobby group. By remaining affiliated with the ALP, unions are automatically the enemy of the Liberals and National party and I seriously question if their stance on trade unions would be as severe if unions were not an intrinsic part of their political rival.

I’m not anti Labor - far from it. It is my hope that unions and the ALP always have a good working relationship in the continued interests of Australia and working people. However - relationships change, evolve, collapse and rearrange. It’s part of life and so too must the relationship change between Labor and Unions for the betterment of both.

When Steve Bracks was elected Victorian Premier in 1999 a procession of senior union officials got few moments alone with the new Premier to “kiss the ring” so to speak. I like Steve Bracks and he’s a decent bloke but I ain’t no ring kisser. I congratulated Steve and said, “All the best mate. I know you’ll never put the interests of the ETU ahead of your Government and I’ll never put the interests of your Government ahead of those of my members. However, I look forward to working with you”. It was a frank conversation said without offence and sums up the way I think the relationship between unions and the ALP should be.


nb: If you enjoyed this article pls join our Facebook group - to link up with other readers, and to receive regular updates on new material.
see:  http://www.facebook.com/group.php?gid=58243419565
Posted by Vaughann722 at 10:53 AM