From the Past to the Future - Unearthing Labor’s Socialist Tradition. 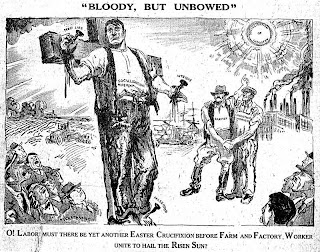 nb:this article concerns the socialist tradition of the Australian Labor Party (ALP) dating back to the 1920s and 1930s; the issues should be of interest to a broad audience...

Sometimes it seems as if Labor’s socialist past is the victim of the strangest of conspiracies – a curious intellectual alliance of the boosters for moderate politics within the Labor movement, who engage in mild historical revisionism to excise Labor’s radical past, as it sits uncomfortably with the incrementalism and compromise they prefer, and the last remaining revolutionaries, who are loathed to admit that the party they have spent their political lives deriding as a ‘sell out’ actually has a radical past.

This short article will outline one historical example of Labor’s socialist past. While there are numerous examples of this, ranging from the utopian socialism of many of the original founders of the Labor Party[1], the adoption of the ‘socialist objective’ during the ‘20s, to the implicit transformational nature of Chifley’s famous “light on the hill” speech to the inherent internationalism of Labor’s longstanding opposition to foreign wars, this article will consider the ‘socialisation units’ in the NSW branch in the ‘30s.

The example of the ‘socialisation units’ in NSW is important for a number of reasons. Most significantly, the ‘socialisation units’ were an anti-capitalist mass movement. They enjoyed widespread support within the party and in working class areas, and they had an outward looking propagandist strategy, educating and agitating for their program in the general community through a newspaper, public lectures, study circles and reading groups. (It was common for socialisation unit members to doorknock their suburb) Secondly, in the terms of the party and the NSW Labor government at the time, they were in the mainstream of party debate and activities. Later, their ‘socialism in our time’ position competed with party leader Lang’s more limited socialisation of credit position in party forums.

The socialisation units were active between 1929 and 1935, and began from an earlier move to establish a “Labor Propaganda Army” (LPA), supported by branch agitational units, at the 1928 NSW party conference.

Initially, in 1930, the backers of the LPA succeeded in having a ‘socialisation committee’ established by the NSW annual conference to propagate the principal platform of the party – the socialist objective.

The purpose of the new socialisation units was 'to carry the message of a saner, better and more efficient social system through socialisation to those hundreds of thousands of misguided victims of capitalism.' The people who proposed these new units had a five part strategy:
'1. By addressing public meetings either open air or indoor. 2. By distributing leaflets on Socialisation which the Committee hopes to publish. 3. By organising units or groups for the above purposes. 4. By donations to the printing or propaganda fund which the Committee hopes to establish. 5. By any other means…'

The membership of the Units was not simply a passive voting base for Labor, or fundraising machines. Volunteers, according to the Units, 'must be able to realise that their job is to be one of the worthiest in the party, one full of honour and responsibility, and that only active, convinced enthusiasts need apply'.

Nationally, during the same period, Scullin was elected with the largest Labor vote in Australian history in 1929, at the onset of the Great Depression, but was subsequently defeated at the following federal election, which ids still a first for an Australian Labor government. This was due to the unpopularity of his government’s economically orthodox deflationary strategy that sought to deal with the Great Depression by cutting government expenditure (and public sector wages and pensions). Lang’s advocacy of the alternative “Lang Plan”, which advocated repudiation of interest payments to overseas creditors until the Great Depression eased,[4] during the same period, ultimately lead to his expulsion from the party, and the establishment of two Labor parties in NSW. This did not diminish his popularity amongst Labor supporters, as he still addressed rallies of 100,000 in central Sydney. Later, after Lang was sacked in May 1932 by the governor general, Lang would address rallies of up to a quarter of a million.

The high point of the socialisation units was the 1931 Easter Conference, where they succeeded in getting the conference to adopt a motion calling on the state Labor government to fight the subsequent state election on a program of implementing socialism within three years (this even made The New York Times). The conference passed this resolution, but it was amended the following day when the conference reconvened after some intense lobbying. By this time, the socialisation units were characterised by two distinct schools of thoughts – the democratic socialism of the leadership group and the revolutionary socialism of some rank and file members. [5]

So what are the lessons from this for Labor activists in the 21st century ?

Many of those who currently advocate ‘mainstream’ positions exclusively within the labour movement are motivated by a misplaced belief that a Labor Party with a left wing agenda is unelectable and that a left wing agenda will never attract mass support. History does not bear this out. As Andrew West has pointed out (“Centrists Don’t Make Landslides”, New Matilda, 23 May, 2008), when Kevin Rudd was elected in 2007 on very much a minimalist program, he achieved a two-party preferred vote of 52.70%, with Labor’s primary vote at 43.38%. By comparison, Gough Whitlam in 1972, who sought to strike a contrast between himself and his conservative opponents in every way in policy terms, and was viewed as much more likely to shake up the status quo, also achieved the same two-party preferred vote of 52.70%, with a primary vote of 49.6%. The strangest long term legacy of the Whitlam reform agenda is the ‘Whitlamite voting cohort’ of 35 – 49 year old men, who are still so enamoured of Whitlam’s progressive social polices that it appears that they have influenced their voting preferences permanently, as these voters upset the normally observed voting pattern of the old favouring the Right, and the young favouring the Left in Australia, by continuing to vote progressively as they age.[6]All of this suggests there is room within the Australian political discourse to pursue more radical positions.

More recently, social commentators Hugh Mackay and David Chalke[7] have argued that their research leads to the conclusion that the voting public are wary (weary ?) of neo-liberal solutions. The most common manifestation of neo-liberal economic solutions, in Australia, is privatisation, which remains perennially unpopular with voters. The debacle around the planned privatisation of NSW’s state electricity assets, with rank and file party members and the community being unconvinced by then Premier Iemma’s privatisation plan, also suggests there is more political space on the left side of the Australian political debate that Labor could utilise. Queensland Premier Bligh’s current privatisation plan seems only to be fairing a little better.[8]

The example of the ‘socialisation units’ is one historical example of the potential for a mass movement that outwardly advocates positions that seek to tackle capitalism’s failings. Most importantly, it shows that these kinds of ideas are a central part of Labor’s history and have motivated previous generations of Labor activists. In order to achieve a fairer and more inclusive society, this should encourage us to be freethinking enough to see beyond policy solutions that are based exclusively in the mainstream. Mainstream ideas primarily seek to perpetuate the status quo, as Scullin discovered too late in the 1930s too.


NB – If you want to read more about this period of Labor history, you should seek out the following article “‘Bucking the machine’: Clarrie Martin and the NSW Socialisation Units 1929 – 35” by Nick Martin, and the definitive book is Lang and Socialism – A Study in the Great Depression, Robert Cooksey, Australian National University Press, 1971.

We are also building our own movement for a democratic economy - and those who are sympathetic are welcome to join another Facebook group of ours: "Movement for a Democratic Mixed Economy"...

And readers are welcome to join our Left Focus group at Facebook - to discuss our material, and keep track of new posts...


[1] One example of which was at Mallacoota, in the state’s far east in the late 19th century, by writer, socialist and poet, EJ Brady.


[2] Formed by branches or groups of branches. 70% were in the Sydney metropolitan area, 10% in the Newcastle area and 5% in country districts


[3] 20% of party branches outside of Sydney had a socialisation unit or participated in one.


[4] It also called for the abolition of the Gold Standard, to be replaced with a "Goods Standard" where the amount of money in circulation was linked to the amount of goods produced, and the immediate injection of 18 million pounds of new money into the economy in the form of Commonwealth Bank cedit.


[5] An example of the revolutionary tendency is manifest in the Payne Report (prepared by Tom Payne) in the wake of the 1931 conference declared - 'social revolution, which means… complete destruction of the capitalist state apparatus… a dictatorship of the working class' following a 'revolutionary conflict between the classes'. Despite its controversial radical remedies, it was still discussed and debated at branch and unit meetings across New South Wales.