Reflecting with Joseph Stiglitz - Addressing the Recession; and Measuring social and economic progress 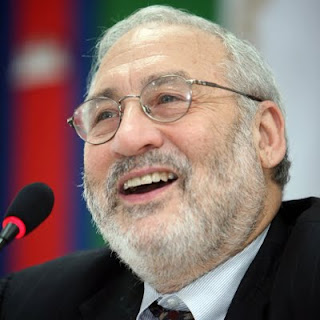 Earlier this September I happened upon an interesting article in ‘The Age’: a critique by Professor Joseph Stiglitz on the question of what kind of measures we ought use to measure social well-being. The most common measures referred to here is Gross Domestic Product: GDP. As Stiglitz noted, world leaders feel pressured to pursue growth in GDP – but this also “causes conflicts”.

There are environmental factors, and then there are issues of quality – rather than just ‘quantity’ of output. An important example, here, is US health care – where the sector comprises a greater proportion of US GDP – but quality and outcomes are inferior. And GDP masks real inequality – where concentration of wealth is not reflected in a single indicator of national wealth.

Such insights also sit well with post-materialist critiques of GDP. GDP - as a measure - obscures inequality. Again: it reflects quantity rather than quality. Do we really need to upgrade our cars every second year: or would we be better off allocating our resources – including our time and labour - elsewhere? What about time for family, social circles, or civic activism? And if the consequence of reshaping our priorities is that we need to increase tax as a proportion of GDP to ‘keep up’ with the provision of infrastructure and social services – is this so bad? If the consequence is that free human development and social connectedness flourish – surely the ‘trade off’ can be worth our while.

In another article from ‘The Age’ back in August 2009, Stiglitz also puts the case for economic stimulus in these difficult economic times.

Some might suggest that the case for stimulus is at odds with the project of reshaping the economy for human need. Rather they aim beyond economic measures which are concerned with only quantity – rather than quality of human life.

The pace of such change, however, is slow. In the interim people need jobs. And tax receipts must be supported here and now to provide for infrastructure and services: social wage and welfare provision. Furthermore: the case needs to be won for a readjustment of economic priorities – and in the meantime we must address the problems we face in the immediate term.

All this considered, Stiglitz contends that President Obama’s economic stimulus measures have not gone far enough. He observes that the aim of Obama’s policies was to “create some 3 million jobs more than would otherwise be the case”. Despite the effect of stimulus the unemployment rate in the US at the time of writing is still 9.6 per cent, http://www.bls.gov/cps/

This translates to 14.9 million US citizens officially unemployed – with a contractionary flow-on effect for the world economy. http://www.bls.gov/news.release/empsit.nr0.htm

There are many dimensions to the problem: but Stiglitz notes the emphasis in the US on tax cuts. Burdened with personal debt – and in fear of job loss: Stiglitz holds that only a fraction of the US tax cuts have flowed on to consumer expenditure. This has frustrated attempts to buoy the US domestic economy. In the face of this conundrum – further (better targeted) stimulus is required.

The crisis – if unaddressed – could lead to exponential economic deterioration: and so Stiglitz insists that if we don’t spend now “we risk spending much more later”.

These circumstances must be addressed by the Obama administration – but the lessons must be heeded in Australia and elsewhere as well.

Any minor difficulty with inflation later down the track is no reason to ‘take the axe’ to economic stimulus: including expenditure on economic and social infrastructure. Such programs provide for human well being: and may expand economic capacity into the future. Again in ‘The Age’, Tim Colebatch has quoted Max Corden: “One is not causing a flood by hosing down a fire”. Powerful words indeed.

And indeed – the qualitative improvement in living standards which might follow with some programs of expenditure – such as Australia’s ‘National Broadband Network’ – is greater than any purely quantitative economic indicator can express.

Further: some areas of public spending comprise a genuine and important human need - while requiring only a 'one off' major investment. Investment in social housing especially addresses a critical problem in Australia of homelessness. Cutting back on such programs under such circumstances - to reduce the budget deficit - does not make sense.

Now is not the time to withdraw economic stimulus. In Australia, the US and elsewhere – we need continued and decisive action to support the world economy. But we also need to address qualitative concerns which relate to the economy – not deceptive readings based purely on economic quantity.

The struggle for health care reform in the US is precisely one such issue – and we should all support the Obama administration in its endeavours to achieve change. If anything we need to revisit the kind of mobilisation achieved by the Obama team in its election campaign: to ensure that as comprehensive a public health care program as is possible is achieved in the United States.

I welcome all readers to discuss these issues here at the blog. Hope to hear from you. :))