Isocracy: For Liberty and Common Wealth 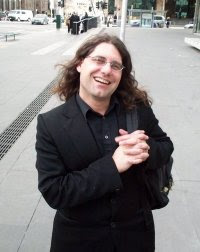 above: an image of Lev Lafayette - the author

An Opportunity for the Left

Isocracy is a political philosophy whose time has come. As the last dregs of totalitarian and authoritarian statist socialism have become anachronisms, mainstream politics has become almost entirely colonised by corporate interests as democracy increases loses its honoured attachment to the polis and the formation of genuine public opinion [1]. 'Capitalist democracy' has become the orthodox political position, an acceptable system for conservatives and social-democrats alike; private ownership of the economy, public determination of socially acceptable behaviour. The only recognised alternative to this neo-liberalism is reminiscent of the classic description [2] of the 'dangerous class', the social scum, who have been thrown into existence by the new order. In this case, religious-inspired anti-modernists who through terrorism, the systematic use of violence against non-combatants for a political goal, seek to impose a new totalitarianism which incorporates modern weaponry to enforce the absolute rule of theocratic rulers and and pre-modern prejudices against the ruled.

Where the supposed major conflict is between capitalism and Islamism [3], there exists a enormous opportunity exists for the new left whereby its historical objectives - secularism, republicanism, personal liberty, common wealth, and national self-determination - can reinvigorate the notion of historical progress within the collective human spirit with recognition of the need to re-establish moral reasoning in each and every generation as technology advances. The experience of totalitarianism in the twentieth century shattered forever the Enlightenment illusion of an inevitable connection between technical progress and socio-cultural development, even to the extent that some (e.g., various forms of primitivism) have rejected technological development altogether. Whilst in some cases well-intentioned this is ultimately an idyllic and reactionary approach which abdicates from dealing with the existing social system and technologies, and thus will inevitably fail. More realistically, the most serious challenge is that posed by the claim that history is effectively at an evolutionary end; liberal democracy will become the only - and last - form of government for all States [4].

The weakness with the argument is that it is explicitly tied to the notion of governance through the State and cannot conceive, like many contemporary anarchists, of governance without a State. But the State, as the holder of monopoly on legitimated violence and as an instrument of class rule [5], is a limited institution and one which will inevitably come into conflict with the technological potential, the productive forces, and the social networks that these technologies allow. At that stage of development any State, no matter how progressive it may have once been, will become a deadweight on further social development as its core characteristics require both governance and oppression. Only through overcoming those components of a monopoly on violence and class rule can a society truly become free and the 'withering away of the state' can be achieved [6]. The historic mission of isocracy, "equal rule", with the universal principles of personal liberty through self-ownership and social democracy in the commonwealth is to create such a society in the context of contemporary technology.

Advantages and Limits of Liberal Democracy

This is not to reject the contribution of liberal-democracy as the most developed State system of governance. There can be no doubt that through its founding principles and through the pressure of mass movements, it has provided great improvements in the life, including the highest levels of economic wealth, high standards of education, health, gender equity, the political rights of republicanism, secularism and multi-party democracy. Liberal democracies have, more than any other system of state-government, produced usually professional police and defense forces and it has been well-noted that liberal-democracies tend not to go to war with each other (liberal or democratic peace theory) [7]; as the holders of the most advanced technologies they do, however, engage in invasive wars of other non-compliant sovereign states with increasing civilian to military casualties.

Nevertheless there are systematic limits to liberal-democracy [8] which are difficult to resolve within its own procedures. Firstly, modern industrial requirements towards growth tend to stress the finite ability of the atmosphere to absorb heat. In other areas too, there is a tendency towards environmental negative externalities as various forms of pollution. Indeed, the overall failure of the enhancement of positive externalities (e.g., public infrastructure) and the minimisation of negative externalities has been correctly identified as "private wealth and public poverty" [9]. The supposed solution to these problems has inevitably been onerous taxes on capital and effective corvée labour of workers, further suppressing productive wealth through deadweight losses.

As a related issue, liberal democracy tends to inequality in wealth as it tends towards the monopolisation of natural resources; the treatment of capital and economic land as the same has highly significant consequences, more than any other economic decision [10]. Even a market with high entry costs does not have the same degree of economic suppression and exploitation as necessary goods in fixed supply. On a similar trajectory the institution of formal democracy likewise tends towards a distorted form through the influencing power of mass media and the ratio of elected to electors. This is also results, except where constitutionally protected (e.g., various Bills of Rights), that universal rights are subject to the vagaries of popular prejudice; the tyranny of the majority [11], a particularly important issue for those of minority religions, sexualities etc.

Revolutionary Reformism: The Transition To A Stateless Government

The core propositions of Isocracy - self ownership, informed consent, a common wealth of resource values, decentralised government, civil participation, defensive militia - are fundamental claims which no contemporary state has introduced, even in the most progressive liberal democracies. In theory these items could be introduced, albeit with difficulty, in such systems and as such, . It is possible, barely, that they could engage in a transformation from state-governments to stateless-governments. This possibility is the basis of a rejection of "lifestyle anarchism" [12] or the sort of Marxist-inspired refusal to participate in actual governance itself. But even if such transitions were, by some miracle, to occur in a legislative sense, this would not provide the necessary universal permanence of the claims which are supposed to transcend whatever political representatives are in power.

In order for this to occur two components are required [13]; first there must be involvement from the population with a dedicated view of rebuilding society, establishing novus ordo saeclorum through a constitutio libertatis dedicated to both "positive" and "negative" freedom, which is only possible through localised civil participation. The second component, and as direct result of the first, is that this new society is built not from some proclaimed revolutionary vanguards or by an elite cadre, which will inevitably hijack the impetus, but by the "organic intellectuals" arising from the conflict between social relations and productive forces. Indeed, the genuine purpose of revolutionary organisations is not to implement revolutions but rather to give people the know-how to run their own organisations[14] as ultimately the purpose of all political organisations should be to create the conditions where they are no longer needed.

[1] Jürgen Habermas, "The Structural Transformation of the Public Sphere", Polity, 1989 [FP 1962]
[2] Karl Marx, Frederich Engels, "Manifesto of the Communist Party", FP 1848
[3] Benjamin Barber, "Jihad vs. McWorld", Crown, 1995
[4] Francis Fukuyama, "The End of History and the Last Man", Free Press, 1992
[5] Max Weber, 'The Profession and Vocation of Politics', in "Political Writings", Cambridge University Press, 1994 [FP 1919]
[6] Vladimir Lenin, "The State and Revolution", FP 1917, gave numerous, and ironically prophetic, warnings on the requirement of governing institutions to "lose their political character" and for the monopoly of violence (the armed forces, police) to be replaced by civil militia if any revolutionary government wished to avoid becoming an oppressive state.
[7] Bruce Russett, "Grasping the Democratic Peace", Princeton University Press, 1993 and Michael W. Doyle, "Ways of War and Peace", W.W. Norton, 1997
[8] For a thorough assessement see Jürgen Habermas, "Legitimation Crisis", Beacon, 1975 [FP: 1973], See also Jürgen Habermas, Niklas Luhmann "Theorie der Gesellschaft oder Sozialtechnologie", Suhrkamp, 1971 for further discussions on the capacity of the system to resolve these matters.
[9] John Kenneth Galbraith, "The Affluent Society", Houghton Mifflin, 1958
[10] An issue noted by most economists but most fully argued by Henry George, Progress and Poverty, FP 1879.
[11] As first described by Alexis de Tocqueville, Democracy in America, (two volumes), FP 1835 and 1840
[12] Murray Bookchin, Social Anarchism or Lifestyle Anarchism, AK Press, 1995
[13] Both these requirements are described in detail in Hannah Arendt, On Revolution, Penguin, 1990 [FP 1963]
[14] In this sense, the mutualist tradition is one of the most revolutionary of all. cf., Kevin Carson, Studies in Mutualist Political Economy, BookSurge Publishing, 2007 FP [2004]
Posted by Lev at 2:43 PM