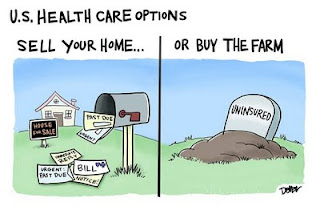 Shortly before the August recess, before the various members of Congress returned to their districts and states, a coalition of conservative organizers held a meeting in which Senator Jim DeMint R-SC stated in a conference call that, “If we’re able to stop Obama on this it will be his Waterloo. It will break him…” The comment had been preceded by a careful strategy that if the health care vote could make it past the August recess then conservatives would be able to apply pressure in town hall meetings, demonstrations, and calls to congressional offices. In all honesty it was not a bad plan. It was perfectly constitutional, and conservatives, despite their past mistakes, have every right to make their voices heard to their elected officials.

However, the plan was seriously flawed in many aspects. In the August to follow accusations began to abound that the concerns being expressed by conservatives were not real, that the conservative movement was being manufactured, and that in fact the goal of the protest had nothing to do with health care but instead to slow down a piece of legislation for political purposes. Such was the position taken by House Speaker Nancy Pelosi and Senate Majority Leader Harry Reid. In many ways this was both true and false. The reason this dichotomy exist is because there is almost always a difference between what a populace is protesting and what political leaders want to extract from those protest.

One need look no further then the 1990’s to see that a significant number of Americans have anxiety over the concept of health care reform. This should not be surprising. Ever since Harry Truman the health care and the insurance industry have put much time and money into the message that health care reform is bad, that it is unnecessary, and that it is a form of the dreaded “Red Menace.” These concerns are real and politicians such as Reid and Pelosi ignore them at their own risk, but a close examination reveals that this time the opposition truly is different from even a few years ago. What is different this time is that the conservatives are not focusing on what is important. This is where DeMint’s plan is fundamentally flawed, because DeMint and many of the protesters are not in fact protesting health care reform, no more then the TEA Parties where demonstrations concerning taxes. Instead, what these August demonstrations are is really just protest against Obama. One hears the term Obamacare, one can readily see Obama on protester signs dressed as a quasi-Hitler, and politicians such as former Governor Palin are creating science fiction scenarios where the elderly and sick have to prove their worth to live.

It is all nonsense, and reasonable American citizens are beginning to understand that. The very name, Obamacare, is a reflection that conservatives are angry that John McCain and Sarah Palin lost, and not how health care is going to be provided. In reality it is congress that is writing this bill, not Obama, so a better term would be Congresscare. Yet, since the protesters are mad that Obama is president above all else no one will see this as the driving force or loose label used by protesters.

DeMint himself illustrates this Obama obsession that the conservatives have developed by comparing American legislation to Waterloo, the 1815 battle were various European Allies succeeded in stopping the French Emperor Napoleon. It occurred after Napoleon had returned to France after his 100 days of return from exile.

If the Nazi comparisons are shameful in the exploiting of historical emotions then the comparison to Waterloo is just plain silly. Not surprising considering DeMint’s claim to be for individual liberty but also in favor of banning single mothers living with significant others from teaching.

Health care reform is needed, even the staunchest conservative will admit this fact. It will most likely occur with or without the support of the conservatives but in the sake of preserving their own movement leaders such as DeMint had better come to terms with history. This will include accepting the 2008 presidential election and understanding what Waterloo was really all about because if the GOP destroys health care reform again it will not matter what temporary victory they will have achieved. Like Napoleon they will face a brief and bitter return to power before being ousted, and perhaps like the French Monarch this time it will be permanent.