Change comes to the Americas 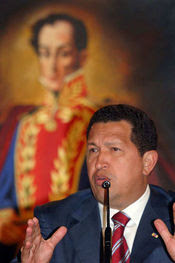 Change comes to the Americas

A tidal wave of change is spreading over Central and .

Once there was the time such a process could not be imaginable without violent resistance by the : to radical change in its own ‘back yard’.

One source refers to a “repressive process [under Ronald Reagan] “that killed more than 300,000” people.   http://www.terrorfileonline.org/en/index.php/Ronald_Reagan

Robert Parry elaborates on this appalling toll:” an estimated 70,000 or more political killings in ”, “possibly 20,000 slain from the Contra war in ”, about 200 political "disappearances"  and “some 100,000 people eliminated during a resurgence of political violence in .”   http://www.converge.org.nz/lac/articles/news990610b.htm

Some estimates paint an even more grisly picture: but it is suffice to say geo-politics and ‘Realpolitik’ during the Cold War comprised nothing short of an atrocity.

Now, though, the Cold War is over.  While tension remains between and the , no longer is there a tense nuclear stand-off: the world upon the precipice of nuclear catastrophe.

Randy Shaw – a journalist based in – suggests a sea change in demeanour to radical regimes in the .

Here, Shaw mentions to “, and much of ”;  “Bolivian President Morales”, and “’s Ortega,” and “other progressive leaders treated hostilely by [George] Bush. (Junior)”

Well may we also add ’s Hugo Chavez as a key part of this equation.

and are the anchors for this process of change in the .

We will consider both.

The Cuban revolution, in particular, has been feared by many in the as a ‘bad example’ for decades.   The revolution of Fidel Castro and Che Guevara began in the 1950s.  After initial failure,  Castro’s second expeditionary force waged a revolutionary war which saw his movement seize power.

The causes of the revolution were manifold. – but poverty and deprivation were at dire levels.

Despite invasion attempts, and sweeping economic blockade by the , and several attempts on Fidel Castro’s life, the revolution’s achievements were many.

Life expectancy has risen from  58.8 years to over 77 years old, and there is comprehensive, free and high quality education and health care. http://www.workers.org/2009/world/cuban_revolution_0115/

And now Fidel Castro has ceased his position as head of state.

In the wake of these developments,  Fidel’s brother, Raul Castro, is making cautious gestures of reconciliation to the ‘old enemy’.  (ie: the )

According to Raul Castro, new President Obama is "an honest man," and  "a sincere man,"    http://obamacuba.blogspot.com/2009/01/transcript-of-raul-castro-on-us.html

And furthermore, the U.S. Senate recently “passed a bill that will ease restrictions against travel and medicine on .”  http://news.xinhuanet.com/english/2009-03/14/content_11008983.htm

Raul Castro maintains: “we will not talk with the stick and the carrot”  http://obamacuba.blogspot.com/2009/01/transcript-of-raul-castro-on-us.html

But regardless – the Obama presidency does bring with it the hope of a new ‘understanding’ and dialogue in the .

Hugo Chavez was elected President of Venezuela in 1999 - after a period of instability brought on by grinding poverty and lethal repression.  http://www.dissidentvoice.org/2009/01/venezuela-socialism-democracy-and-the-re-election-of-president-chavez/

Since then, Chavez has survived an attempted coup in 2002 – backed by the .  Support amongst the populace – and from within the army – saw the coup attempt end in failure.  http://www.dissidentvoice.org/2009/01/venezuela-socialism-democracy-and-the-re-election-of-president-chavez/

Since 1999, Chavez has nationalised his country’s petroleum industry – a crucial move in the redistribution of wealth and the defeat of poverty.

Oil revenue was used to further  “citizen educational programs” and “[enhance] democracy.”   Public-financed television stations were handed over to popular control.  And new ‘popular forums’ were created – providing a voice for the poor; and trade unions grew in strength and prominence.  http://www.dissidentvoice.org/2009/01/venezuela-socialism-democracy-and-the-re-election-of-president-chavez/

and : a special relationship

A strong relationship has emerged between and : both of which seek the spread of socialism throughout the .  An important aspect of this relationship has been trade in goods and services.  Critical for both countries has been the trade of Venezuelan oil for the services of Cuban doctors.

And furthermore, has sent between 30,000 and 50,000 “technical personnel” “including physicians, sport coaches, teachers, and arts instructors who offer social services.”   http://en.wikipedia.org/wiki/Cuba-Venezuela_relations

Crucially, Venezuela and Cuba are co-operating in laying  an underwater fibre-optic cable between the two countries – to provide ‘cutting edge’ internet access.  Such co-operation holds the promise of improve the quality of life of both countries’ peoples. http://www.caribbeannetnews.com/article.php?news_id=12915

The process through which Leftist governments have been elected in is reaching ‘critical mass’.

As Anastasia Moloney argues: countries electing such governments since the year 2000 include: Brazil, Argentina, Uruguay, Bolivia, Chile and Ecuador.  According to Moloney, this has left “roughly 75 per cent of South America's 382 million inhabitants living under a leftist government.”   http://www.commondreams.org/view/2009/01/14-9

While some of these governments are in the ‘mainstream’ of social democracy (eg: Brazil) , governments in Venezeuala and Bolivia are more radical in their socialism and ‘populist nationalism’.

Venezuela is perhaps in the most strategically important position: able to fianace progressive redistribution of wealth through oil profits.

While Venezuelan oil money is finite, though, there are nevertheless opportunities for a  progressive alliance fighting poverty and exploitation  throughout the Americas.

Supposing the decades-old US economic embargo is lifted, Cuban doctors, teachers and other specialists could provide education, skilled labour and care throughout the region.

With concerted effort, there are opportunities throughout the region to develop manufacturing, information and service industries: including social and co-operativist enterprise.

The hope is that Central and South Amercia will develop and diversify in their own right – and no longer simply form the ‘Periphery’ of the United States economy.