Debating the Stimulus - and the rights of the needy 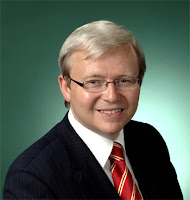 Kevin Rudd - we need to Keep up the Pressure on Labor in the lead up to the next Federal Budget.

Today the Australian Labor government of Kevin Rudd passed a formidable stimulus package through the nation’s parliament amounting to $42 billion.

Also passed were measures to provide insulation to every Australian home –at a cost of $3.7 billion– with flow-on effects for energy efficiency for years to come.

However, the package was redrafted after concerns raised by the Greens, Family First, and independent Senator, Nick Xenophon.

Specifically, Xenophon managed to extract $900 million to be devoted to restoring the Murray-Darling basin.

Planned payments to single-income families and tax bonuses for workers, meanwhile, were wound back by $50 to $900.

These changes were supported by Australian Greens senators. The money saved, as a consequence, (over half a billion dollars), was redirected into a number of measures - including the creation of “over 10,000 green jobs”.

The Greens also secured an agreement from the ALP to ‘sit down and talk’ about welfare reform. But no firm commitment on pensions was given by Labor.

Such an understanding may comprise a good start – but does not go nearly far enough. (We will consider this in a later post.) The unemployed will be particularly vulnerable as we lurch deeper into crisis. These people should not be made to shoulder the burden, and reform of pensions ‘across the board’ is needed urgently.

Around the world governments are facing the reality of financial and economic collapse. Global action is necessary to ‘jump start’ the world economy – and to breathe new life into consumer demand and investor confidence.

Critically – reflating unsustainable ‘bubbles’ – whether in housing or elsewhere – is not the answer.

In the immediate future, the aim is to boost economic activity here and now. But further on, governments need to invest in the kind of long term infrastructure and skill-formation that will provide for productivity and quality of life.

Investment in public housing – for ’20,000 social housing units’ – is a vital response to the plight of vulnerable Australians. But an ever greater investment is necessary – in light of the crises which are gripping our nation.

6,000 elderly Australians were classified as homeless in 2008. And as of , over 1800 houses were reported as having been lost to bush fires in .

Investment, here, fulfils a crucial human need – and can buoy the economy over the coming months.

GIven the extraordinary circumstances, the government ought to provide funds in full for reconstruction - in instances of those disadvantaged who had been unable to afford insurance.

But the task of providing for fire victims should not detract from prior plans to construct housing elsewhere. The project needs to be expanded in its scope.

Finally, Rudd Labor needs to get its house in order with regard to the construction of a National Broadband Network.

The massive task of constructing a joint wireless/fibre to the home network could provide thousands of jobs into the future – while driving productivity – and appreciably improving our quality of life.

Such a project should be fully public funded and owned: as even 'part private' monopolies can result in abuse of market power.

For all these plans to work, though, – over both the short term and the long term - global co-operation and co-ordination is required. And needs to do its part.

Amongst all this, though, it seems that the leader of the Opposition in is playing a dangerous game of rank political opportunism.

Well may we hope that the Australian people will see through Turnbull's opportunistic gambit. Playing upon fears of ‘Labor debt’, Turnbull will be hoping that Australian voters will turn on the government as the crisis deepens, and later on as debt needs to be serviced sustainably once the economy finally returns to growth.

The spectre of ‘Labor debt’, here, is put forward in a shallow line of argument which has gained currency with repetition – again and again - over the years.

But even if the debt we incur now must be serviced later: it is only through investment in infrastructure, housing, and welfare – that the most vulnerable are protected: and that the basis of future growth and quality of life is set.

Failure to invest in infrastructure now will impact negatively on productivity into the future: and will feed into a ‘recessionary spiral’. We need, therefore, simultaneously to address the crisis 'here and now' - while planning for future growth.

So - here - amongst the community of progressive bloggers - what should we do?

We must ‘get out there’ and argue for reform: supportive of Labor’s measures – but demanding more. We must fight the tendency towards austerity – and we pressure government to target assistance to those most in need.

Labor could also have gone further for these people. Leading into the next Federal Budget, we must demand far-reaching welfare reform.

Preferably, with the support of the Greens and Family First, we might look forward to an increase in the full single rate of all pensions to at least 30% of Male Average Total Weekly Earnings. (MATWE) This would amount to $674.52 a fortnight.

A rate of somewhere between 85%-90% of the single rate could, meanwhile, be provided for couples. (Difficult estimate as we do not have access to modeling.)

We will consider this further, though, in a future posting. At this stage I encourage readers to contribute to the debate. Your comments are welcome. (but no flaming or trolling)

Keep up the pressure – the next major flashpoint will be the 2009 Federal Budget. Progressive forces need to mobilise and co-operate now. By winning the the debate in the 'public sphere' (the 'cultural struggle' some would say) we provide Labor and others 'room to move'.

The struggle we wage here and now is just as important as that going on in our parliaments!