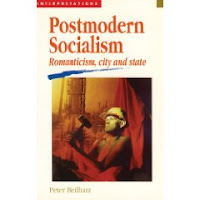 Original contribution to a critical debate,

It's been some time (several years) since I read this book, so my memory might fail me sometimes. Nevertheless, it is enough to say that this is one of those books whose arguments are so clear and compelling that the reader is strongly influenced by the arguments encountered years after first perusing its pages.

This is a compact title, packed with strong arguments as to the relation between socialism, postmodernity, romanticism and the state. Beilharz argues that romanticism was always a strong element in socialist thought: this despite attempts by some to develop Marxist analysis into a science.

Considering the 'pros' and 'cons' of anti-modernist romanticism and modernity, Beilharz sides with the Modern project, although rejects what he deems to be 'Faustian pacts'. (ie: Modernisation regardless of social cost)

Concluding that we still live in that space we have come to refer to as 'modernity', Beilharz rejects postmodernity as an 'era' but wonders, after Lytotard, whether postmodernity is best considered as the 'critical moment' of modernity.  This leads in to a thorough, and sometimes inspiring, consideration of the merits of socialism in an age where socialism is considered by many to be dead.

It is Beilharz's view that Marx remains one of those influential historical figures between which we must choose. Insisting the relevance of socialism in a world still wracked by an underworld of poverty and inequality, Beilharz argues for a 'Promethean Marxism': one which brings critical light to humanity, but which is nevertheless bound by its own limitations and the failure of Marxist prophecies to be fulfilled.

Beilharz denies, as one author had written, that 'Marxism heals the sick', but insists that in these uncertain times, he is still 'useful to think with.' Such Marxism may never promise true emancipation, but like Luther is resolute: "Here I stand. I can do no other."

Beilharz concludes by stating that, thanks to hermeneutics, we can have 'as many Marx's as we choose'. The uses to which Marx can be put is limited only by our imagination and our powers of interpretation.

Beilharz's vision of socialism, as explored in his examination of 'the city', tends to be one of the mixed economy, the Australian city of Melbourne, caught between deliberate planning and spontaneity, being something of a metaphor for the kind of socialism he would envisage.

In an indirect way, part of this book might be considered an argument for market socialism, although importantly this is never stated categorically.

For its size, this book is full of ideas, and well worth the read. It remains a significant influence on the reviewer’s thinking to this day, and I would recommend it to anyone concerned with the issues it explores.