Unpublished Letters from a Left Activst 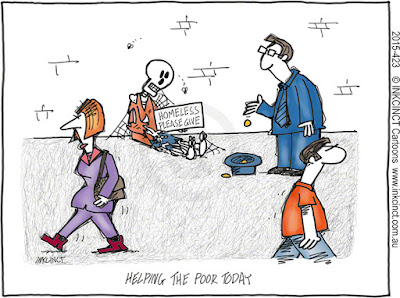 What follows are another series of letters I have written to the ‘Herald-Sun’ and ‘The Age’during the December 2016 to January 2017 period.   None were published.  But I hope it sparks some thought and some debate amongst readers here at Left Focus.

Topics include 'Cultural Marxism' , Labor Policy, Pensions,  Green Energy and who pays?,  Islam and Education, Female Genital Mutilation,  What to do about Poverty?, and 'Bolt and Panahi need to Work Out Which Side they are On on Civil Liberties.....


"P.Jones (Letters, 29/12/16) again raises the spectre of ‘cultural Marxism’ ; evoking the remnants of Cold War era fear of those movements bearing the name of Karl Marx.  But ‘Critical Theory’ and the ‘Frankfurt School’ (the proper names of the traditions referred to as ‘cultural Marxism’) are radical intellectual traditions which have very little to do with the Totalitarianism and Stalinism which once prevailed in Eastern Europe and elsewhere.  Critical theorists promoted personal freedom, dignity and fulfilment ; and they rejected attempts by Stalin and his successors to crush the independence of radical thought.  Some critical theorists have also promoted the peaceful transition to a democratic socialist order through mutual engagement based on the powers of human reason.  They also subjected past Marxism to criticism on the basis that radicals needed to be open-minded about confronting past errors.  Considered in context, ‘cultural Marxism’ does not deserve ‘the bogey status’ imposed on it by Conservative intellectuals and others who either do not really understand its content ; or otherwise want to distort perceptions in order to create fear and prevent change."


Labor needs a Stronger Agenda ; and not only Defensiveness on Company Tax


Responding to ‘The Age Letters 7/1/17’: While Labor’s opposition to Company Tax cuts is welcome, Australia needs a more robust reform agenda: improving our social wage and welfare state, and providing for vital infrastructure.  Hence a National Aged Care Insurance Scheme to roll back regressive user pays;  and improve quality of life for our most vulnerable. Superannuation tax concessions for the wealthy and the upper middle class could be cut, bringing in tens of billions.  In addition to Capital Gains Tax and Negative Gearing reforms, Australia could also look to phased withdrawal of Dividend Imputation. Reversion to a 75% credit alone could save over $5 billion/year.  Because of their progressive potential, reform of income and other progressive taxes (eg: Medicare-style Levies) should not be ‘taboo’.  Presumed ‘pull factors’ regarding Corporate Taxation can neglect the impact of education and infrastructure in attracting investment.  Infrastructure privatisation increases cost-structures.  And there are economic and moral dilemmas associated with ‘corporate welfare’. Citizens and taxpayers effectively subsidize corporations benefitting from services and infrastructure ; because of a more regressive tax mix (flatter, and/or focusing on consumption) and also indirectly through austerity. Poverty and inequality also affect consumption power, damaging the broader economy.

The Problems with Tightening Pension Eligibility


Frank Stubbs (Herald-Sun Letters, 7/1/17) argues “the pension is not a right” ; that it should only go to the most needy.  But there are problems with this argument.  In the 1980s Labor introduced superannuation while means-testing pensions.  This enabled a focus on ‘targeted welfare’ ; where we could have both a regime of low taxation – and necessary supports for the genuinely vulnerable.  Superannuation made all this possible.  But before this the Aged Pension was considered a right.  Primarily because people had paid their taxes their entire working lives – and had earned that security.  But “rights” must also be a matter of human decency ; such that we must not allow the vulnerable to struggle in poverty – even if they cannot work.  The problem with superannuation is that it might increasingly see the marginalisation of the Aged Pension, and those dependent upon it.  The consumption power of low income Australians is also affected, harming the economy. In the future conservatives may demand further tightening of pension eligibility; and that would marginalise pensioners, giving rise to further self-interested cries from business, the middle classes, the wealthy -  for pension cuts.   There’s a potential future social cost to cutting pension eligibility.


AN Important Question on Green Energy:  Who Pays?

In response to Matt Johnston (13/1): It is necessary to take action on renewable energy to respond to global warming.  But an additional concern is “who pays?”  Currently, renewable energy is more expensive.  And while many households are taking up ‘micro-renewable energy’, a great many others are ‘locked out’ because they simply cannot afford the investment. But as middle class families opt for micro-renewable energy, this damages the ‘economies of scale’ of the legacy centralised energy industry.  The cost of ‘poles and wires’ and other infrastructure is divided amongst a smaller consumer base.  So consumers on low incomes are forced to pay more.  This is worsened by privatisation: which means providers will pursue profits and avoid cross subsidies for the financially disadvantaged. “Micro-renewables’ are probably the way of the future: but in the meantime governments need to take stronger action to ensure financially disadvantaged customers don’t bear the cost.  Subsidies of various kinds need to negate the entire effect on affordability for low income customers during this transitional period.  (Until technology improves and prices fall)  The timeframe depends on the priorities of government and the progress of research and development.

Responding to Kevin Donnelly on Islam and Education

Kevin Donnelly (Herald Sun, 2/1/17) criticises Islam as ‘inherently violent’ while defending ‘the Western tradition’ against its apparent detractors on ‘the Left’.  Some things need to be stated in response to this.  Firstly, it is partly a matter of convenience.  The ‘West’ supported the Mujahedeen (Islamic fundamentalists) against the Soviets during the Cold War, despite what this meant for women in Afghanistan. Further, Islam is diverse – and potentially open to reform – perhaps like Christianity and Judaism have been.  (partly because of the historic intersection of Christianity with liberalism) In some places ‘a (liberal) Islamic reformation’ may actually be a good thing. (further reform of the Roman Catholic Church would also be good) But in the meantime we should not promote notions of ‘cultural superiority’ to justify interventions which are really geo-political in nature. Also when we defend ‘the Western tradition’ and ‘the Enlightenment’ we should be clear what that means.   It means supporting free and critical enquiry.  The consequence of this also must be that education is not only for ‘fundamentals’ of numeracy and literacy.  There is a crucial place for the Humanities and Social Sciences – in combination with a progressive civics agenda – which promotes political literacy and active citizenship.  Authoritarian responses to protest and civil disobedience are counter to the freedoms we celebrate which originated with the Enlightenment – and the liberal and democratic revolutions that followed.


Responding to FGM:  How Prevalent is it in Australia?


Rita Panahi (16/1) makes some points about the most reactionary practices  Islam, mentioning child brides, ‘honour killings’, and female genital mutilation. Despite allusions to a so-called ‘regressive Left’ any Leftist worth their salt could not help but oppose those practices.   Of course we must support women and girls who oppose and fight against these practices. But there are other complications. Firstly it is unclear how widespread  FGM is in Australia.  In 2010 the ABC reported that 700 cases were presented to the Melbourne Royal Women’s Hospital.   But in 2011 the total Australian Islamic population (all creeds considered) was nearing half a million.  So its important to keep perspective: to support the rights of women and girls ; but also to be aware of possible ulterior motives. Strong cultural differences can be exploited to justify geo-political and strategic objectives.  We need to keep cultural difference and strategic/geo-political issues separate so as to avoid confusion and remain clear about the real motivations and interests behind our foreign policy.


What Must we actually Do in Response to Poverty?


In the Herald-Sun letters section recently there has been some good discussion of poverty. But the problem is on such a scale that it will never be overcome through charity ; and we need action - not only talk. Only government can provide the resources for a definitive solution. That calls for a stronger, fairer welfare system for disadvantaged groups, the elderly and the unemployed ; a fairer, progressive tax mix ; and labour market re-regulation at the lower end.  It also calls for a stronger social wage ;  including more funding for public health and education ; as well as for public housing and emergency accommodation, and energy and water subsidies.  It might also include better-subsidised public transport and internet access. (these are now essentials - for instance it is virtually impossible to search effectively for work now without them)  It could include an active industry policy which offers ‘flexible’ work favourable to employees’ needs ; preventing those such as retrenched auto workers being relegated permanently to unemployment.  And it could involve greater flexibility for pensioners to take on casual or part-time work without foregoing their pensions ; hence avoiding poverty traps.


Andrew Bolt claims “Leftists hate our freedoms” while Rita Panahi gives thanks for liberal freedoms she enjoys in Australia compared with theocratic Iran.  But at the same time Rita Panahi has dismissed civil libertarians as ‘do-gooders’.  And for all his talk, Andrew Bolt has never had anything to say against anti-protest laws introduced by past Liberal governments in New South Wales and Victoria. That includes ‘move on’ laws that criminalised freedom of assembly ; and laws in NSW which could see protestors jailed for several years for civil disobedience.  As well as Federal laws criminalising ‘whistle-blowers’ who reveal details on the treatment of refugees.  Journalists like Panahi and Bolt need to decide what side they are on when it comes to liberal and democratic rights.  It is true that parts of the Left qualify freedom of speech where they believe that speech could be socially harmful.   Other Leftists are nonetheless concerned at possible precedents which could help result in a far more general retreat of liberties.  And the ‘pressure cooker’ effect of suppressed (and sometimes manufactured) grievances which can explode with the rise of populist, far-right-wing movements.  Reality is more complex than you would think reading Panahi and Bolt.
Posted by Vaughann722 at 1:13 PM