Conservative Misconceptions on Tax , The Aftermath of 'Senate Reform', and More 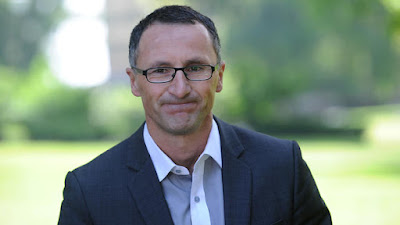 above:  Greens leader Richard Di Natale argues reforms to the Senate will make Parliamentary elections more democratic ; But is he mistaken?  Could the Liberals soon control the Senate in their own right?
This week I'm publishing six more letters looking at important issues in Australian and international politics...  These were originally sent to The Age, the Herald-Sun and The Australian ; Mostly they were unpublished.
Also this week we 're considering:

“Neil Cole (Reducing the Suicide Rate 9/3) raises the connection between Schizophrenia and suicide ; and by inference that we should tackle this just as seriously as we do the road toll for instance.  Yet one issue that none of the major parties are dealing with is that of reduced life expectancy for people with mental illness, and especially those with schizophrenia.  Here looking at suicide is only just ‘scratching the surface’.  For those so afflicted  (approximately 300,000 Australians with schizophrenia)  there is a reduced life expectancy of 25 years.   What is required is a ‘close the gap’ program similar to that pursued for indigenous peoples.  Not only to reduce suicide rates, but to promote fitness, health, good eating and the like, and also to further ameliorate poverty, provide flexible work, reduce social isolation etc.  ‘The Age’ has briefly considered this issue last year, but what is needed is an ongoing media campaign  demanding this be put this on all the major parties’ policy radar ahead of the coming election.  Some corners of the media could also do to stop treating Disability Pensioners like criminals.”

The Herald-Sun (9/3) alludes to the corporate sector urging Turnbull to ‘be bold on tax’ and make sweeping cuts to the Company Tax rate.  Superannuation Concessions are mentioned, and indeed according to Richard Denniss of the Australia Institute those concessions (mainly for the wealthy) will soon cost taxpayers as much as $50 billion a year!  But are Company Tax cuts better for the rest of us, and do they really improve the economy?   Company Tax cuts mean that business is increasingly excused from contributing to paying for the services and infrastructure it benefits from. (eg: education,  communications, transport)  So either those services and infrastructure are neglected (hurting the economy) or the rest of us are called upon to ‘pick up the tab’.  This is what some people are calling ‘corporate welfare’.  It amounts to a ‘race to the bottom’ and effective ‘corporate blackmail’.  But ironically an economy with low corporate tax rates may end up being a LESS attractive destination for investment exactly because of the neglect of infrastructure, services and human capital.

Reforming Superannuation Concessions is not ‘A new Tax’

Mark Kenny (14/3) argues that voters are “sticking with the Coalition’ because of “Labor’s plans to lift taxes on superannuation and investment properties.”  This statement is profoundly misleading.  Labor is not bringing in new taxes, here, or even raising any existing taxes. Instead Labor is proposing that a series of concessions and subsidies be wound back.   Subsidies and concessions overwhelmingly favouring  the well-off.   Indeed these could be credibly interpreted as areas of government expenditure.   So a simple ‘reframing’ of the question could radically alter the terms of the debate.  Superannuation Concessions and Negative Gearing provisions could be seen as rorts for the well-off which cost average and low income tax payers.  Indeed Richard Denniss of the Australia Institute has estimated that superannuation concessions alone will soon cost taxpayers over $50 billion a year.  The sheer scope of the cost to the public purse is phenomenal.  It’s enough on its own to pay for an entire National Broadband Network (NBN) every year!  Incidentally Labor’s proposed  measures on superannuation concessions are at best modest.   If anything Labor needs a stronger policy. But they will be ‘spooked’ by the way ‘The Age’ and other publications are approaching this issue.

Integration and Assimilation not the Same Thing!

Frank Basile (HS Letters, 19/3) argues that ‘integration is the only way’ and that we should adopt a policy of “assimilation”.  But Integration and Assimilation are not the same thing.   Assimilation demands that people abandon their own culture to adopt the host culture.  That is, that they give up their cultural distinctiveness.  But Integration has a different aim.  Integration aims to establish enough ‘shared ground’ to facilitate interaction, communication,  intermingling and inclusion.  That might also include a commitment to liberty, democracy and social fairness.  In this way Integration aspires to achieve social harmony.   But under Integration this ‘shared ground’ does NOT mean immigrants must abandon their cultural identity and distinctiveness.  Integration is the way of bringing distinct cultures into relation with each other on the basis of ‘common ground’. In such a way cultures overlap and interpenetrate rather than 'one cancelling the other out’.  Integration is well and fine but let’s be clear what it really means.

(19/3/16)  The Greens have combined with the Liberals to implement Senate Reforms  which will probably wipe out the so-called  ‘micro parties’.  Here we speak not only of the ‘Sex Party’ and so-called ‘Liberal Democrats’ but also of the Carers’ Alliance and the Women’s Electoral Lobby.    In short voters will no longer be able to vote  for a Party ticket with the preferences being distributed according to those parties’ wishes.  The Greens will argue that takes the power away from the parties, and puts that power in the hands of  voters. .On the one hand it may do away with the questionable scenario of micro-party candidates being elected on automatically distributed preferences with only a tiny primary vote of their own.   On the other hand it might do away with the prospects of micro-parties  frustrating the Coalition’s social and economic agendas.   Joe Hockey’s brutal Budget would have passed without opposition in the Senate.  Anthony Albanese has rightly asserted that a system of ‘quotas’ – ie: imposing a minimum primary vote necessary for election - could also have rectified the system without the same ramifications.  Another option would be for the preference directions of all candidates be made public ahead of any election.   We can only hope these reforms do not deliver the Coalition absolute power through control of both Houses of Parliament.
Was Bernie Sanders Wrong on Clinton?
A letter sent to ‘The Age’ a while back)    Some people are criticising Bernie Sanders for not allowing Hillary Clinton to interrupt and speak over him. Who was in the right? Is 'what's good for the goose good for the gander', or do different rules apply to women and men? Generally speaking on the broad left we should not talk over or interrupt one another. We should have enough mutual respect or consideration to let arguments take their course, and allow people to arrive at their judgements. And in the past men's voices were always dominant - and that had to be corrected. But if a woman can interrupt or speak over a man, but a man cannot interrupt or speak over a woman (or even try and reassert himself as Sanders did when he was interrupted) - is it fair? And could this incident really hurt Sanders' campaign? And would that be fair also?
Posted by Vaughann722 at 4:52 PM