What is 'Financialisation' and Where is it Taking us? 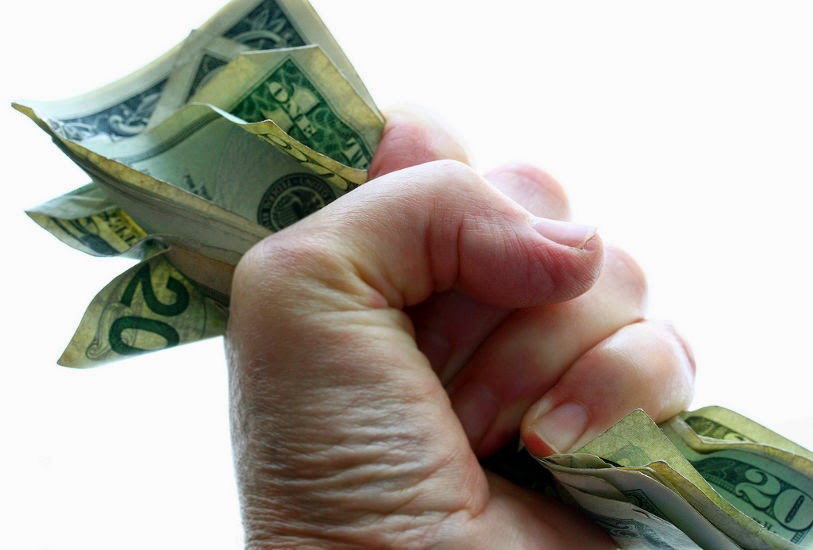 In this submission from former Communist Party of Australia leader, Eric Aarons, the financial sector is put under scrutiny for its amoral pursuit of profit - but at the cost of society at large.  As the author explains, some of the world's largest banks' actions sometimes verge on the criminal.


It is the new form being taken by capitalism, in which a worldwide coterie of Mega-rich individuals takes a far greater part of the socially-created wealth than can be justified on any national interest or social justice grounds.

It is taking us on a path that endangers the capacity of our natural environment, our planet, to continue supplying the quantity and quality of resources we will always need for our own existence, and the continued existence and health of the wider natural environment we require to be able to flourish.

We need to know for some purposes the cash value of the items we use, but to actually live we need to have the  things themselves, the solid entities, that we and other living species require for life itself, and to develop, over this and coming centuries, the full potential of Homo sapiens – a project which we have only just begun.

If my memory serves me, the economist Gary Becker said that a money equivalent could (and should) be put on marriage and other inter-personal relationships. We know that this indeed occurs, but is it in any way a recipe for achieving genuine community happiness?

The general concept of ‘financialization’ (a new and rather ugly word as well as a repugnant concept) arose from the rapid rise in the proportion of GDP occupied by financial transactions, entities and ‘products’ following the victory over fascism in the Second World War. From about 2 percent in 1940, it rose in the US, which led the way, to 8 per cent at the turn of the present century, where financial markets have dominated the traditional industrial, agricultural and social ones.

It also plays on a naïve belief, derived from the phenomena of interest and credit, that money can, of itself, make more money. A knowledgeable sales person can make up endless tales that seem to make sense of this for the unwary, and many are paid by their bank employers on that basis, being sacked if they fail to succeed in doing so.

But as well as the theoretical fundamental weaknesses of the concept, it has now become, through the banking system, a centre of widespread, multi-billion, even trillion-dollar crime that, unless rigorously dealt with, threatens far worse catastrophes than those we have recently seen in this early part of the second millenium.

In his renowned biography of John Maynard Keynes, Robert Skidelsky quoted an unsourced remark that Lenin was reported to have made: ‘that there is no subtler, no surer means of overturning the existing basis of society than to debauch the currency’. (page 239)

I doubt that Lenin ever made such a remark, and in any case he did not have the means to actually do it. But the centres for financialization, the big banks, are doing a more than competent job in that direction, of which I give many instances below.

The intention is to treat all values exchanged, including tangible or intangible, future or present promises, as if they were a form of currency. Promises are morally expected to be kept and agreed processes observed, with legal penalties sometimes available to enforce them. But today they increasingly take on illegal form as instanced below, or that of `betting, which has now, among other evils, penetrated all forms of sport, degrading the site of one of humanity’s most pleasurable, even noble, manifestations.

Before giving instances of the scale of the crimes, we should note that they only became possible when Paper currency – that is fiat money – became universal when gold became impractical. The word describes  an edict in which a government declares ‘let it be so’ , or ‘let it be done’, derived from the Latin word ‘fieri’.

Though Britain was near-bankrupted by the Second World War, its long-standing banking credentials gave it the call over the USA to be the world’s international financial centre. One of its tasks in this capacity was to determine, through a top level bankers’ committee, the rate of interest to be charged on the widely used temporary unsecured loans that banks make between themselves. This in turn became a guiding benchmark for a myriad of other financial transactions. It was called Libor – the ‘London inter bank offered rate’, set each working day at 11 am. (There is also a ‘Euribor’)

Many banks were caught out by the GFC, partly because the official economics had arrived at the point of a Great Moderation in which the boom-bust  pattern of development of the past would no longer apply. How wrong they were!

If a bank’s assets fail to exceed its liabilities, by law it has to cease trading. Details are not available, but many banks found that loans and purchases made in earlier and better times (say in Greek or Spanish government bonds) were losing up to half  of their value, so that the bank itself (Barclays for example) could have found itself technically insolvent and would have had to cease trading. Then, in 2009, when Bob Diamond, a former CEO of Barclays was in charge of setting Libor, he arbitrarily fixed the rate to boost the value of some of the bank’s holdings.

In 2012, an international investigation into the manipulation of interbank offered lending rates revealed a widespread plot undertaken by multiple banks – most notably Barclays, UBS [Union bank of Switzerland], Rabobank [Dutch] and the Royal Bank of Scotland – to leverage these interest rates for profit … Regulators in the US, UK and EU fined banks more than $6 billion for participating in rigging interest rates. Barclays agreed in late June 2012 to pay a $453 million fine to settle allegations that it had systematically rigged The ‘London interbank offered rate’ – Libor – between 2005 and 2009.

Many other banks joined in:

From now on space limitations will confine me to giving only the name of the bank; but further information is readily available on the internet.


Rabobank (a Dutch bank with a long name)


The Royal Bank of Scotland

Though, so far as we know, no major Australian bank has been directly involved in such criminalities, its general approach is similar. Known before privatization as the ‘People’s Bank’, some employees of the Commonwealth Bank of Australia in October 2008 sent an anonymous fax to the Australian Securities Investment Commission ‘citing fraud at Commonwealth Financial Planning  and  alleging a “high level” of cover  up within CBA. The culmination of that action was a damaging report from the Senate economics committee. It sensationally found that the bank repeatedly sought to  keep the regulator and the public in the dark and its credibility was so tarnished that only a royal commission or judicial inquiry could get to the bottom of what really went on.


Credit Suisse is reported to have misled Fannie Mae and Freddie Mac on the quality of loans worth $16.6 billion in mortgage bonds. (The Australian, 24 March, 2014).

‘The Bank of England has become embroiled in the escalating foreign exchange scandal after it suspended a member of staff and launched a new investigation into allegations that its officials condoned or were aware of market manipulation. The move is the latest twist in the $US 5.3 trillion per day forex [foreign exchange] industry, the world’s largest financial market.’ (The Australian, March 7, 2014)

The Royal Bank of Scotland ‘had to pay large fines, bringing the total penalties paid in Libor settlements to more than $3.7 billion. (Wikipedia, December 5, 2013)

‘The Bank of England has become embroiled in the escalating foreign exchange scandal after it suspended a member of staff and launched a new investigation into allegations that its officials condoned or were aware of market manipulation. The move is the latest twist in the $US 5.3 trillion per day forex [foreign exchange] industry, the world’s largest financial market.’ (The Australian, March 7, 2014)

BNP (Banque National de Paris) + Paribas (Banque de Paris) $US 8.97 billion. The Australian reported (July 2) that, legally, the prosecutors could have sought double that amount’…..
‘US authorities are pushing for BNP Paribas to pay more than $US 10.7 billion to end a criminal probe into allegations the bank evaded US sanctions’. (The Australian, June 1, 2014)

On July 3, The Australian revealed how much worse than I have so far revealed the situation with the banks really is. It wrote ‘The French government which had warned that disproportionate sanctions could destabilize Europe’s took credit for the limited scope of the dollar ban, but “BNP Paribas will continue to be able to finance economic activity in satisfactory conditions”  said France’s Finance Minister Michael Sapin. And the paper claimed, straight-faced, that bankers ‘think that criminal charges are now like financial penalties: a painful but manageable cost of doing business’.

There is much more information available on the internet, but the above should be enough to show that unless the banks are rigorously policed, with prosecutions and jail terms for the guilty imposed, the financial system is threatened with the debauched state predicted by Keynes, but today in reality inflicted by the greed of the banks in particular, and the mega-rich that own them.

Some may hold to the view ‘the worse the better (for social change)’. But history does not support that stance. It is always the mass of people that suffer most in such circumstances, so we must, rather, struggle to avoid such outcomes with positive alternatives. I hope that, among others, trade unionists and their supporters will see the potential of the above facts to negate or diminish major features of the assault the Abbott government is developing against trade unions and the left in general.


All the guilty should be punished; but on this count the Left should be firmly on the front, not the back foot as it is at present.
Posted by Vaughann722 at 10:04 AM