Rudd versus Abbott: Observations on a Lacklustre First Election Debate 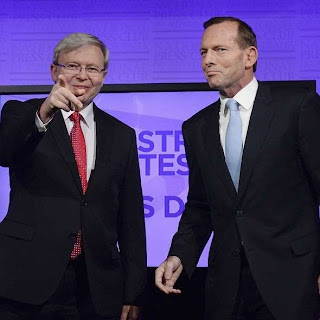 above:   Kevin Rudd and Tony Abbott in a lacklustre first election debate - But Abbott is still the most frightening prospect by far

Tristan Ewins explores the themes which featured in Sunday night's first election debate.  But both sides are neglecting some of the most crucial issues re: potential austerity, the aged care crisis, and how to pay to rectify the infrastructure deficit.

Last Sunday night’s leader’s debate for the Australian Federal election was disappointing at a whole host of levels.


To begin with – both leaders heralded their party’s commitment to low tax and low expenditure as a proportion of GDP; with Rudd attempting to outdo Abbott on this theme.  Though at least Rudd questioned Abbott’s commitment to cutting Company  Tax at this time and under current conditions.  Still: neither side faced up in a truly substantial way to the challenges of an ageing population, a growing population, and a declining Chinese minerals boom. Though Abbott made the frankly absurd allegation that it was the carbon and mining taxes which were to blame for falling Chinese demand.  Neither leader fully faced up to the massive infrastructure deficit and the fact that any Australian government will be confronted with the dilemma of increasing tax or cutting expenditure on a large scale.   Abbott postured as ‘the infrastructure Prime Minister’ – But there is no sense of HOW he could possibly pay for the host of initiatives he has committed to – which amount to about $20 billion in cost so far.


Increasingly in his choice of language Abbott turns to the extreme US model of de-valorising tax and social expenditure generally.  This is an approach which holds the prospect of encouraging US-style inequality, social dislocation, homelessness and poverty.   Apparently Abbott has ditched ‘Christian Democratic Social Welfare Centrism’ in favour of a harsher, crueller, punitive and less generous regime when it comes to social services, industrial rights and welfare.   If he wants voters to think otherwise he needs a clear and strong reorientation of his arguments and language.  (and the policies which flow from this)


In response to the contradictions between Abbott’s infrastructure promises, and his failure to propose concrete tax or savings measures, Rudd did (quite rightly) point to the future prospect of Abbott increasing and/or expanding the scope of the GST.   But Rudd did not outline his own comprehensive response to the aforementioned challenges either.  Abbott insisted that the GST will not go up without a mandate.  Perhaps they are thinking of saving that for a second term.  (in which case why would you ‘give them a foot in the door’?; especially when it would be very likely for them to ‘go a second term’) Certainly Liberal State Governments have long argued for an increase in the GST, including its extension to health and food.  Yet if the money is not coming from the GST – then again, where IS  it coming from?


Crucially, Rudd failed to deliver a potential ‘knockout blow’ during the debate – which could have been achieved by more consistently interrogating Abbott on that theme: “where exactly will the cuts come from?”  Voters have a right to know; and indeed MUST know if they are able to make an informed decision.  And if they cannot make an informed decision in voting for Abbott – then they should not vote for him at all.


Furthermore: leaving announcements too late should not be acceptable for voters either.  If Abbott leaves the release of policies until too late it means he is trying to avoid scrutiny.  On policy it shows “he has something to hide.”


We know the Abbott cuts will be in the tens of billions should he win: especially given his existing commitments. For example, restoring the Private Health Insurance Rebate for the wealthy, as well as Parental Leave on full pay for women on  $150,000/year.  And we know in this context Abbott intends to dump the mining tax and emissions trading, and substantially cut Company Tax as well.  And to add to the fiscal pressures Abbott would- face – he has unambiguously established his desire to radically expand Defence expenditure.


Labor has claimed the Liberals’ ‘budget black hole’ is around $70 billion.   But even if this is slightly off-target, what else do voters have to go on given the Liberals’ failure to provide Treasury-approved costings with only weeks to go before election day?   Abbott is claiming there will no ‘slashing’ of health,  education and jobs under a government he leads.  Yet interestingly he does not mention welfare at  all.   How far do projected cuts have to go before Abbott imagines it warrants the verb ‘slash’?


Abbott has talked about his support for ‘social solidarity’ – but cuts to welfare, as well as punitive welfare programs based on labour conscription would indicate something entirely different.   (to be fair, though, Labor itself has cut welfare coverage for the disabled and sole parents; and as a consequence may lose some support to the Greens)


There is a broad claim that Abbott’s tax cuts will stimulate investment.  But this neglects the infrastructure deficit and the consequent ‘bottlenecks’ and their impact on productivity.  Abbott’s chosen path of wide-ranging tax cuts would also neglect the increasing social cost – and the cost to individual tax-payers – from ever-expanding ‘corporate welfare’.  AGAIN there’s the question – ‘where is the money coming from?’


To elaborate on the ‘corporate welfare’ argument;  We speak here of corporate tax cuts at a time when the GST is being put up for discussion as a means of redressing the infrastructure deficit.  If corporations are not paying their fair share to access infrastructure and services they benefit from, and ordinary taxpayers are ‘picking up the slack’  (either through their taxes; their pay and conditions; or through degraded social services and welfare)  – THAT is ‘corporate welfare’.


Moving on, though:  Neither side had any new announcements when it came to Aged Care.  Abbott talked of ‘cutting red tape’ but gave no concrete impression what this would mean ‘in the real world’.  Could he actually mean a relaxing of standards amidst a widely recognised crisis in high intensity care?   Though at least Rudd was substantial insofar as he was on top of existing policies.   And at least Rudd got behind Aged Care workers – recognising the value of their work.


But in light of the resonance of this issue in the electorate given families’ concern for their loved ones – and  for their own future – it is puzzling that a ‘National Aged Care Insurance Scheme’ is not on the table.  The Greens – it should be noted – could capitalise in a big way by championing this issue and pressing it to the forefront of public debate.  Improving pay, conditions and career paths for Aged Care workers and nurses is part of the picture; as is established ‘baseline’ staff to patient ratios for high intensity care facilities.  There are a whole host of other issues – which we have not the scope to explore comprehensively.  But meaningful reform would demand many billions in new Budget expenditure.


Both leaders were much of a muchness on asylum seekers – as we’ve come to expect there is a playing to ‘the lowest common denominator’.  The lack of a Greens presence was especially telling, here – as they are the only ‘mainstream’ party questioning the ‘hard line’ of the majors.
Rudd’s response to cost of living pressures was also very disappointing.  (Basically he blamed cost of living pressures on public ownership of utilities in the case of New South Wales)  What Rudd didn’t face up to was the ways in which privatisation itself has intensified those pressures – with duplication of administration and marketing costs, the need to provide for private profit margins and dividends, and an inferior cost of raising finance in the private sector.


But also note the following: If the state governments are currently driven to complement their budget expenditure with utility dividends, what would the consequence be of privatisation?  If state governments cannot afford to pay for infrastructure and services as is, what would the consequence of utility privatisation be?  Even aside from the aforementioned inefficiencies of utility and infrastructure privatisation, for this question we could well ask Kevin Rudd ‘where the money would come from’.
Importantly: Abbott also failed to address Cost-of-Living Pressures satisfactorily. With the impact of the Carbon Tax only marginal once compensation was taken into account, it's not clear at all which Abbott policies would make a difference for average families.  Abbott is full of rhetoric on Cost-of-Living - but has little substance so far.  Ideologically - he is even less predisposed to consider the effect of privatisation, here, than Labor under Kevin Rudd.


Finally: Abbott refuses to move on the National Broadband Network.  Refusing to concede an inch to Labor, or give the government credit for anything, Abbott is playing a fundamentally destructive role here.  The NBN has the potential to radically renew our economy in areas as diverse as education, health, information, communications and recreation: and to open up possibilities that have not even been conceived of yet.  Think back twenty years and consider the information-based industries that have arisen over that period!  And the broader impact of information and communications technology on all our lives.  But Abbott’s ‘NBN on the cheap’ will require households to pay thousands if they want to access higher-quality fibre-to-the-household technology.  And over the long term his alternative simply will not stand the test of time.


To conclude: Abbott and Rudd are both reading ‘from the same book’ when it comes to small government, low and often regressive taxes, and a failure to respond sufficiently to the pressures of an ageing population, and a growing population.   Though it is the Liberal Party who proposes a Review which will consider an expanded GST specifically.


Meanwhile: Rudd recognises the challenges posed by a declining China resources boom – but in the debate was ‘light on details’.  Interventionist industry policies to nurture high skill, high wage industries ‘don’t appear to be on the agenda’ for anyone.  Also, neither side seems to have a clear and comprehensive proposal for redressing the infrastructure deficit without socially destructive and unfair austerity elsewhere to offset the cost.


Abbott says again and again “who do you trust”?  But how can voters trust a man who waits until the last moment to deliver his policies, his savings, his costings – quite blatantly because he wants to AVOID ACCOUNTABILITY AND SCRUTINY?


Both leaders put on less than ideal performances at the debate last Sunday.  But there are more frightening questions pertaining to Tony Abbott’s Budget agenda than with Kevin Rudd.  Abbott’s expenditure commitments and his commitment to sweeping tax cuts simply do not add up.   It is Abbott who has worked systemically to avoid scrutiny of his costings and related budgetary savings.  And the most vulnerable welfare-dependent would likely be expected to pay the price.
Posted by Vaughann722 at 5:34 PM