Gonski … just do it 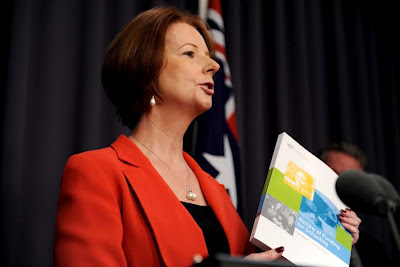 The following article by Jenny Devereaux explores the case for implementing the Gonski Education recommendations which would deliver an additional $3.8 Billion for state education in Australia. This is crucial to restore confidence in state education and avoid its marginalisation over the long term. Arguably such major initiatives are crucial if Labor is to seize the initiative and inspire on the basis of real achievements. PM Julia Gillard - Implement Gonski now!!    DEBATE WELCOME!


nb: Readers are also welcome to join Left Focus's Facebook Group where there is ongoing robust debate of all manner of issues relevant to the Left!

The Prime Minister, Julia Gillard, is on the defensive where the Government’s commitment to the Gonski Review is concerned.

Responding to a question on the implementation of the Gonski recommendations during her recent Q&A appearance, she said that we could expect the Government “to say something in response to Gonski in the months ahead”:

There’s a lot one could say about the wider question of the ALP’s education reforms, but let’s look just at the question of Gonski and school funding since the ALP took office in 2007.

The Gonski Review was commissioned in April 2010 by Julia Gillard, then the Federal Minister for Education. Acknowledging that Australia’s system of schools funding is “one of the most complex, opaque and confusing in the developed world”, she said the Review was expected to conclude in 2011, with new funding arrangements in place for the next schools’ funding agreement beginning in 2013.

Gonski and his review panel consulted widely, commissioned a body of research on key issues around the funding of Australia’s schools, and received more than 7000 written submissions. The report was delivered on time to the government in December 2011 and publicly released in February.

As widely expected it confirmed that Australia’s system of schools funding is unfair and inequitable. Not only does it lack coherence and transparency, it is also unsustainable, and contributes to widening resource gaps between schools and sectors and schooling outcomes for students from different backgrounds; so much so that students who live in disadvantaged areas are up to three years behind their peers in more affluent areas.
In short, several decades of funding arrangements largely driven by political accommodations rather than educational policy imperatives have entrenched a deeply flawed funding system which delivers a disproportionate share of Commonwealth funding to Australia’s private schools at the expense of our public schools and the majority of students who attend them.

Gonski found that Australia is investing far too little in education and, in particular, in public schools. The Report recommends a $5 billion a year increase in funding (2009 dollars) with $3.8 billion to public schools which are in the greatest need, and major changes to the way money is allocated to schools to ensure it is better targeted to the meet the needs of students.

· A School Resource Standard [SRS] which sets a per student dollar amount for primary and secondary students (Primary – $8,000 & Secondary - $10,500 – in 2009 figures);
· A series of loadings depending on the size and location of the school; the concentration of students from low SES backgrounds; students with a disability; Indigenous students; and language background/proficiency of students;
· Capping the SRS for private schools at 90% which will reduce according to their capacity to attract fees – potentially to 20-25% of the SRS.

Despite Gonski’s insistence that “Australia will only slip further behind unless, as a nation, we act and act now”, there has been no commitment by the Government to deliver the urgently needed additional funding, while the Coalition says there should be no changes to the existing system until at least 2017. Rather, the Government says, more consultation is required.

While there is no question that the Rudd and Gillard Labor governments have significantly increased schools funding, there are two significant problems with Gillard’s Q&A response in this regard.

Firstly, a substantial proportion of the increased funding has been of a short-term nature. The $16 billion Building the Education Revolution infrastructure funding program has now wound-down, and a number of short-term programs being funded through National Partnerships Payments [NPPs] are in the process of being wound-down.

Secondly, the underlying Commonwealth funding arrangements for public and private schools remain. The most recent analysis of these arrangements by Dr Jim McMorrow, a leading schools funding analyst, is based on the May Federal Budget. It shows that Commonwealth funding for public schools is projected to decrease in real terms for each of the financial years from 2011-12 to 2014-15. While it is projected to increase in 2015-16 due to the re-introduction of some NPPs, the overall effect is that public schools would receive $673 million less in real terms in 2015-16 than they received in 2011-12, a cut of 12%. In ‘per student’ terms, this would see each public school student receiving $385 (or 16%) less.

The reduction is mainly due to the cessation of short-term programs like the NPPs; programs from which public schools have received more than their enrolment share of funding because they are targeted to schools and students with higher concentrations of low SES backgrounds and those needing greater literacy and numeracy support. These are the schools and students hardest hit by the effects of the Budget; the very schools and students who would benefit most from the implementation of the Gonski recommendations.

By contrast, Commonwealth funding to private schools is projected to increase in real terms by more than $1.3 billion (or 15%) by 2015-16; a $495 (or 7%) for each private school student. And the reason for the increase?

“The assumptions built into the Budget estimates and projections that preserve and protect the Commonwealth’s current funding scheme for non-government schools. In particular, the ongoing indexation of general recurrent grants ... at a level that exceeds increases in the real costs of schooling overcompensates for the non-government sector’s share of the budgeted reductions in National Partnership and DEEWR-administered programs.” (http://www.aeufederal.org.au/Publications/2012/JMcMorrowBudget.pdf)

This highlights both the “fragility and vulnerability” of public school funding and the “inequity of an indexation measure which applies increase to non-government schools regardless of relative need” and is what the Government’s lack of commitment on Gonski is defending and protecting. No amount of talk about education reform and (short-term) funding increases can justify that.

McMorrow argues cogently that the Budget analysis both encapsulates the very problems identified by the Gonski review, and demonstrates the urgent need for the recommended reforms including replacement of the existing indexation measure with a more equitable measure and better targeting real increases to the needs of schools and students. This requires new legislative arrangements in place before the current inequitable funding arrangements end in 2012. The Government needs to be reminded, as Gonski says, that “Australia will only slip further behind unless, as a nation, we act and act now”.

Jenni Devereaux is a Federal Research Officer of the Australian Education Union.
Posted by Vaughann722 at 12:00 PM