Reforming Australian Curricula: Why is Kevin Donnelly afraid of a Robust Democracy? 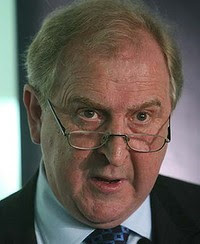 above:  Kevin Donnelly's vision of education curricula in Australia excludes education for active and critical citizenship
The following article puts the case for curriculum reform promoting active citizenship and critical thinking amongst young Australian students.  Specifically, the author argues there should be cross-partisan consensus were all parties truly committed to democracy in practice...

Conservative Education commentator, Kevin Donnelly has again been in the headlines – attacking progressive aspects of secondary curricula in .  On November 3rd in ’s “Herald-Sun” Donnelly was quoted as criticising the lack of emphasis on in the origins of ’s system of government. But Donnelly also went further – condemning civics and citizenship provisions in curricula as encouraging students to become “cultural warriors for the Left”.  Indeed Donnelly indicated he was “concerned” by the “active citizenship” emphasis.
(Herald-Sun, 3/11/2012, p 22)

I have a number of arguments in response to Donnelly’s stance.

To begin – to be opposed to “active citizenship” ‘in principle’ is suggestive of a disdain for democracy..  Active and critical citizenship are the foundation for any robust democracy as any genuine liberal and/or democrat should be able to grasp. Democracy only functions when an informed, mobilised and engaged citizenship is capable of (and inclined and willing to) hold the powerful – including politicians – to account.   When active citizenship decays, so too does democracy – and in this sense the cynicism and disengagement of Australian citizens is a genuine threat.

But in order to engage constructively citizens require certain ‘intellectual tools’ – to help in formulating cohesive values systems, a sense of their interests, and of different perspectives on the proper rights and responsibilities of citizenship.  Arguably what is required is “education for ideological literacy” and the imparting of ‘skills of deconstruction’ which assist tomorrow’s active citizens in discerning the ways in which ideologies and institutions themselves (both on the Left and the Right) have been socially and historically constructed.  For some the word ‘deconstruction’ is synonymous with ‘nihilism’; but this need not be the case if we do not choose for it to be so.  There remains scope for a certain kind of deconstruction side-by-side the positing of certain ‘universals’: the value of life, liberty, community and a sense of universal humanity; of kindness and altruism; and the value of culture and science as forces driving improved quality of life and self-realisation for all of us.

Both the Labor Party and the Liberal Party are experiencing severe organisational decline in – and have been for some time.  You would think there would be a cross-party commitment to the principles of active citizenship as a remedy for the drift towards the scenario of a “detached political caste” governing over a disillusioned and disengaged populace.  Education for active and informed citizenship need not simply be a ‘Trojan horse’ for either the Left or the Right – but rather should be considered a revitalising factor for democracy generally; and an empowering factor for all young people.  An emphasis on active and ideologically literate citizenship is about encouraging young people to think critically and empowering them to see through the ‘spin’ employed by all political parties in today’s society, with its emphasis on the short term media cycle.  The result of a more robust ‘active and critical’ civics and citizenship education curriculum would be a stronger democracy; with young citizens capable of ‘reading against the grain’ whether the texts in question are of a conservative, liberal or socialist perspective.

As a consequence we would have not only more committed liberals or socialists – but also more committed conservatives.  While we might see some young people gravitating towards socialist, labour and human rights organisations, we could just as easily see other young people grappling with economic liberalism; engaging with the ideas of values of, say, Hayek or Burkean Conservatism; or of ‘Christian social welfare centrism’.  Underscoring an active/critical agenda would be an inclusive pluralism as the basis for cross-party consensus.

And this could be achieved in the context of education regarding the principles of the ‘liberal democratic settlement’;  a settlement of agreed liberal, social and democratic rights which provide a ‘framework for relative conciliation’ for societies such as ours.  (although in the spirit of critical enquiry even this would be open to relativisation from critiques both from the Left and Right; including those seeking ‘a new constitution’; which is the substance of any political revolution)   The point would be to consider the role of democracy in ‘setting oppositions free’, but also resolving them peacefully; though accepting civil disobedience as a legitimate strategy where differences are irreconcilable – but not accepting a descent into escalating violence.

Why is Kevin Donnelly so determinedly opposed to such a scenario?

Both the authoritarian Left and the authoritarian Right would likely “have problems” with an education system which seeks to empower and mobilise individuals to think deeply and critically, and encourage them to express themselves, organise, and participate.  But leftists, liberals, democratic conservatives – should all at least hold to a ‘shared political ground’ when it comes to empowering young Australians with tools of ideological literacy and criticism – not as a ‘Trojan Horse’ for either the Left or Right – but on the assumption that ‘democracy is a good in of itself’.

Perhaps Donnelly has a point: that education about ’s historic cultural and political ties to are important – even though ‘unfashionable’ for those planning and formulating this nation’s curricula.  But if there is an important place for recognising the place of in the Australian nation’s cultural heritage, surely there must also be a place for ideological and cultural literacy.

In part this means communicating the experience of people otherwise excluded in ’s historical cultural narratives: including the experiences of women, migrants and indigenous Australians.  But it should  also involve critical engagement with other sources of Australian identity and tradition: whether ‘the ANZAC spirit’, or ‘the spirit of ’.  Importantly: curricula need to be pluralist, inclusive and balanced with regards such content.

English can play a central role in encouraging critical thinking and critical writing – regardless of any ideological prejudice.  The study of History, meanwhile, could be framed in such a way as to critically interrogate values systems – whether that means exploring critiques of capitalism looking at the Great Depression; or exploring the sources of totalitarianism in both its Stalinist and Fascist forms.  To be balanced there could also, for instance, be a consideration of ‘both sides’ of the debate with the retreat of the welfare state and mixed economy from the 1970s. And Politics can provide for a more direct engagement with the political philosophies which underscore our pluralist society: whether socialist, liberal or conservative.

Finally Pluralism itself needs to be the underlying principle of all such attempts, also: to maintain a cross-partisan consensus on the need for education for active and critical citizenship.

As a socialist I can nonetheless appreciate the wisdom in Edmund Burke’s words: "All that’s necessary for evil in the world to triumph is for good men to do nothing”.   An active/critical civics and citizenship education model is about encouraging students to think carefully about what is right, and then to stand up for that in the context of participatory democracy.

I implore Kevin Donnelly: think again about your opposition to education for active and critical citizenship.  Commit yourself to a new consensus – based on a genuinely pluralist curricula – which can only strengthen the democracy that we all claim we believe in.